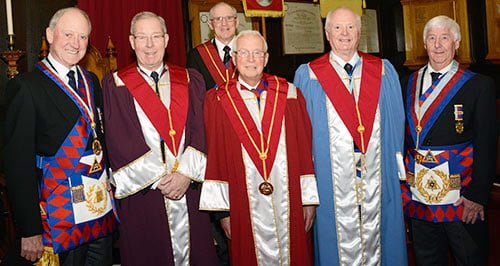 Many events throughout one’s life may be considered memorable; some for the pleasure that they brought, others for less pleasant reasons. Barry Jameson AtoPrGPs was certain that the memories of his first visit to Sandylands Chapter No 5702 as the representative of the Grand Superintendent would stay firmly in the former category.

The chapter was opened by the first principal Colin Westwell and shortly thereafter, Barry Jameson and his attendant colleagues were admitted and a hearty welcome was extended together with Colin’s expressed wish that they all would have an enjoyable evening. Barry thanked him and assured everyone that enjoyment was his primary aim.

Due to the unavoidable absence of the director of ceremonies at relatively short notice, his assistant Stephen Fox was thrust into the role at ‘not the 11th hour but at a couple of minutes prior to midnight’ as was later observed! He oversaw the ceremony with commendable competence in the circumstances. 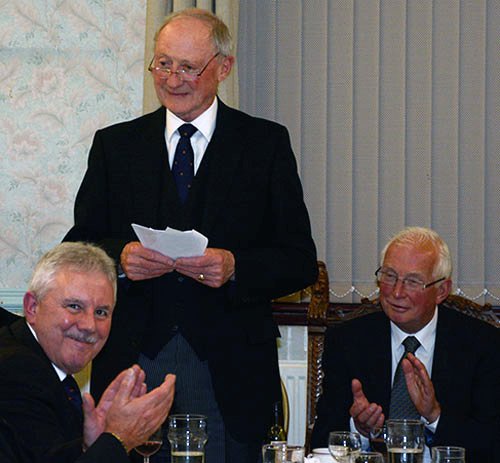 The response from Barry is warmly received.

Colin Westwell duly obligated and installed David Liptrott into the first principal’s chair for a second time in a most pleasing manner. David in due turn facilitated the ascension to the second principal’s chair of Don Poulson who himself had the pleasure of placing past first principal Raymond Griffiths into the chair of third principal.
The delivery of the robe addresses saw excellent performances from Carl Horrax, Steve Taylor and Frank Heath as they were given to the first, second and third principals respectively by these companions. Following the appointment of the chapter officers, Barry Jameson delivered the congratulations and best wishes of the Grand Superintendent Tony Harrison. He said that Tony particularly hoped that the year ahead would be both enjoyable and fulfilling for the chapter.

Newly installed first principal David Liptrott thanked Barry for bringing the greetings from Tony and then invited Colin Westwell to present to Barry details of the donations made by the chapter. A total of £508 had been donated to the West Lancashire Freemasons’ Charity and a further £300 to the Province of West Lancashire MCF 2021 Festival. 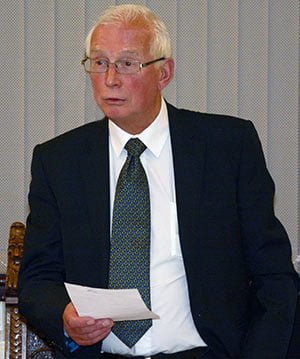 David Liptrott thanks everyone for attending.

At the festive board held in the dining room at Morecambe Masonic Hall, a very happy atmosphere prevailed. In responding to the toast to grand officers, Barry stated that he was conscious of the fact that many of his listeners would have heard the ‘messages from the Province’ on numerous other occasions but he craved both their patience and indulgence.

In a very succinct manner he sketched out the essential developments that were pertinent to Royal Arch Freemasonry, articulately highlighting the success of the exaltation ceremony enhancements and the Talking Heads initiative. He was pleased to report that it appeared from the statistics available to date that these innovative ideas were providing tangible stimulus to the success of the Royal Arch in the Province.

In proposing a toast to the three principles, Colin Westwell made reference to the Masonic pedigrees of each of the new appointees. He said he felt fully confident that the chapter was in caring and competent hands for the ensuing year. The evening ended with all in agreement that a happy and enjoyable time had certainly been achieved.

A well-attended festive board at Sandylands.