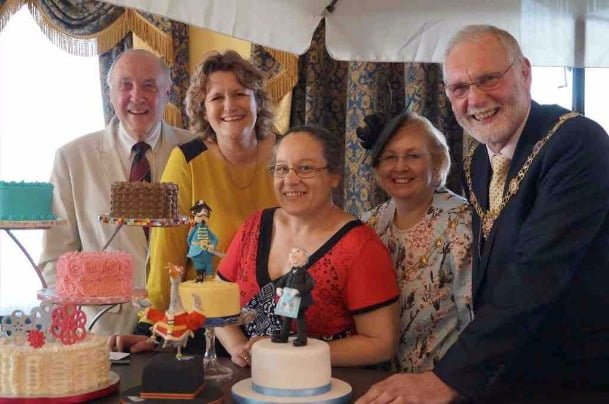 The Master of The Spa Lodge, Tony Morrell, was delighted to welcome the Mayor & Mayoress of Harrogate, Cllr Nigel & Mrs Lynn Simms to the Bake a Cake Competition on Sunday 8th May at the Masonic Hall, Harrogate where they joined the audience of 75 friends family and guests.

The charity event was in aid of The Royal Masonic Benevolent Institution which runs 17 care homes throughout the country.

Judging was undertaken by Stephanie Moon, Iona Wilson and Sharon Morrell. There were some 20 entries over the 3 categories for both adults and teenagers. The winners were announced after a talk by Stephanie and a cake icing demonstration by Iona.

Stephanie is a well-known Yorkshire lass and a regular on the food show circuit having appeared on TV, on radio and in the local press and Doug Mills the Lodge Charity Steward was delighted that she should have accepted the invitation to join the event.

The wealth of her experience has been gained in a career spanning from the Park Hyatt Hotel in Sydney to the Kulm Hotel in St Moritz. Closer to home she has worked in the Dorchester Hotel in London and for eight years as Executive Chef at Rudding Park Hotel.

Stephanie is now a Chef Consultant to All Things Food and is Chef Tutor at Leeds City College.

Iona grew up in Yorkshire and studied at Art College in Leeds before moving to Cambridgeshire with her family. The children are now young adults and following on from being a full-time homemaker she searched for a new adventure which led her to becoming part of Free Cakes for Kids, a community service to families who find it difficult to provide a birthday cake for their child. Following on from this interest Nonies was formed which has allowed Iona to develop her skills in cake decorating and enter international competitions.

Following on from the presentations and light refreshments the Mayor & Mayoress, Stephanie and Iona announced the winners and presented them with their prizes.

The Star Baker was Joan MacClean- Burley who won a voucher for Afternoon Tea for four at the Clocktower Resturant kindly donated by Rudding Park Hotel.

Doug also acknowledged the support given by:

and finally he asked the Master, Tony Morrell to present a small token of appreciation to the Mayoress, Stephanie and Iona

and the Mayor & Mayoress of Harrogate, Coun Nigel Simms and Mrs Lynn Simms