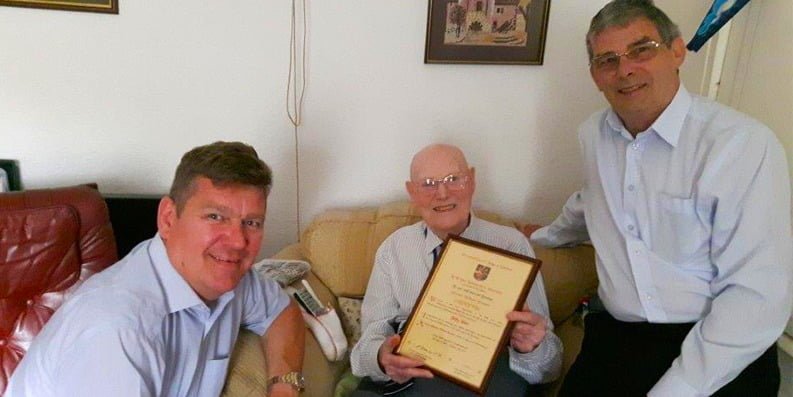 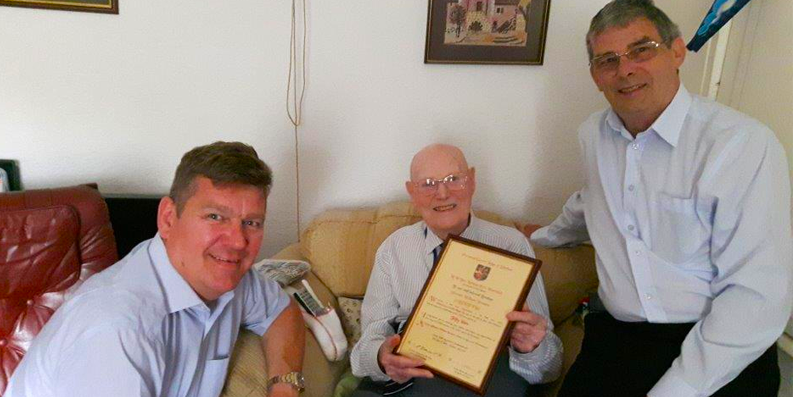 Not many people, apart from his close friends and family, will know the name of Silvester William Brunton, but mention the name Sid Brunton to anyone in Dunston and Gateshead and immediately you can see a smile of joy appears on their faces.

At the great age of 96 years old Sid has recently completed 50 years in Freemasonry, Joining Crowley in June 1966 at the age of 46 years old. He is a great lover of Motorcycles and this was a great talking point between him and Assistant Provincial Grand Master, John Watts, another great enthusiast, during a recent visit to Sid’s home in Bensham during which time John presented Sid with a certificate to mark his fine achievement. Sid was a very active mason but unfortunately he has not been able attend his lodge due to his age restraints but he and his daughter Anne were delighted to accept a request for John and a couple of members of Crowley Lodge to visit him to present him with his 50th Certificate on behalf of Norman Eric Heaviside, Provincial Grand Master. John jokingly pointed out that as Sid was 46 when he was initiated, the presentation of his 50 year certificate could easily have been one for 60 or even 70 years, should he have joined earlier.

John was joined by Keith Liddell and Derrick Jones and the years were rolled back as Sid chatted about his early years at Burnopfield infants School, which coincidently is now the Burnopfield Masonic Hall, laughs and smiles were shared as he recalled many of his early memories from his younger days, leading on to his distinguished service with the Army in Burma towards the end of WWII and his civilian career which followed which saw him serve as a Chief Engineer with Redheugh Iron and Steel.

Sid was initiated in Crowley Lodge on 17th June 1966. On his next birthday he will be ninety seven years of age.  He recalled many happy times as a Mason and mentioned how he was particularly proud to receive recognition as a Provincial Steward. All three visiting brethren were taken aback when Sid then made his own presentation when he handed John a donation £50 towards the 2021 Festival. John assured him that this was gratefully received and would be faithfully applied.

Keith Liddell summed up the occasion by saying “All in all this was a very dignified and enjoyable presentation and a most deserved tribute to a very fine Gentleman and Freemason”.