Shropshire’s famous Iron Bridge is a landmark famous since its opening in 1781 – and in recent times has been of added Masonic significance since the Consecration of The Iron Bridge Lodge 9897 early last year.  The Lodge (and the Bridge) have featured in “Freemasonry Today” – for more information about 9897 and the Universities Scheme, search earlier posts in this blog which will tell all! 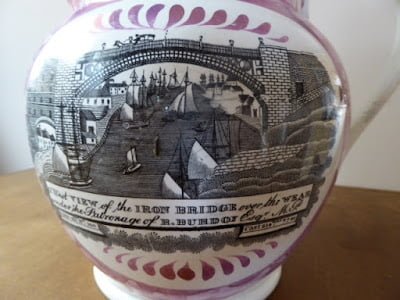 W Bro Andy Delamere, the first Master of 9897, was particularly interested to receive a Masonic jug from the Durobrivae Lodge 6956 in the Province of East Kent. It was immediately apparent that the jug was a long way from home, as it showed an early iron bridge across the River Wear – only the second such bridge after our own! The Wearmouth bridge opened in 1796, and was the brainchild of Rowland Burdon, M.P. for Durham and Provincial Grand Master. It was subsequently rebuilt by Robert Stephenson and eventually dismantled when the modern bridge was built on the same site between 1927 and 1929.The jug shows a splendid view of the original bridge. 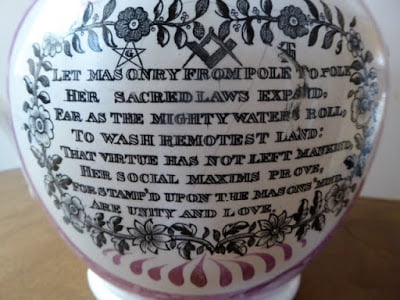 Research at the Library and Museum of Freemasonry in Great Queen Street, London showed that this was an example of Sunderland ware, and though fascinating, is not particularly rare: other examples may be viewed in UGLE’s catalogue (type Wearmouth bridge into the search box) : the bridge was evidently a popular subject for the local pottery designers. There is another example in Worcester‘s Masonic museum. Over 30 variations on the design are known to have been made.

A particular attraction of this jug is the Masonic verse it bears on the reverse, which is reproduced here: