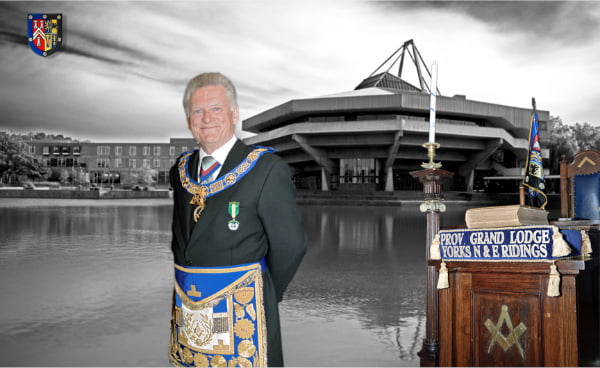 To all those I have just invested, wear your new regalia with pride. The words ‘reward’ and ‘expectation’ spring to mind. Yes, a reward for past services, but an expectation that you will work hard to further the cause of Freemasonry by speaking openly about it in your local communities.
With a new team in place, it would be remiss of me not to thank all those who have played such an important part in the year that has just ended. Chris Thomas, Barry Hovell and Peter Johnson, together with the Grand Officers of the year and all who have represented me and my predecessor. A very special thank you to the teams of active officers who, time and time again, joined me and the other Rulers, on visits to lodge after lodge despite the detrimental effect this had on both their pockets and their waistlines.
Today we lose three wonderful servants of this Province as their period of office comes to an end. John Davies has now completed six years as Provincial Grand Director of Ceremonies and whilst most of that time was spent looking after Richard, I have personally found John a real pleasure to work with in recent months. John is very attentive and when describing his job to me, said ‘if you have a sore throat, I cough’. John, a job very well done and one of which you can be extremely proud.
Derek Gaunt, our Provincial Grand Almoner, hands over to his successor today, and what a hard act Derek will be to follow. It is no coincidence brethren that we receive such large levels of support from the four central Masonic charities – the first task is to identify those needing help, many of whom are too proud to ask. Derek has set up a network that works extremely well and once identified has a team well versed in ensuring the maximum available assistance is obtained. Thank you, Derek.
Finally, our Provincial Grand Chaplain, Michael Mewis, who has looked after our spiritual wellbeing for the last five years. Michael, it is always a pleasure to be in your company and those who have attended the Annual Provincial Service will know that your sermons are something quite special. I am very pleased that you have accepted my invitation to join the Representatives Panel – some lodges are in for a real treat.
These three brethren are now lost to those key offices, but are not lost to the Province and I feel sure they will remain active and a part of everything that we do. .
I would like you to give a very warm welcome to a special member of this Province who is with us today, None other than our Past Grand Superintendent, Donald Davinson. Following the sad death of Neville Barker Cryer, Donald has kindly agreed to take over the annual search for a Provincial Lecturer. Donald, it is a very real pleasure to have you with us this morning.
I am also delighted to recognise any Heads of other Orders who are with us today – their support is always most welcome. Indeed, earlier this month at the Annual Meeting of Provincial Mark Lodge I was presented with a cheque for £2,000 to add to the £14,000 the Mark Masons have already given to our Festival.
The welcomes would not be complete if I did not introduce the Grand Officers of the year. We had a very enjoyable day with them at the investitures in London on the last Wednesday in April. If they would stand when I refer to their appointment, you could perhaps applaud at the end
Our Province is fortunate to have two Active Officers of Grand Lodge, in VW Bro James Newman President of RMBI and W Bro Michael Graham who is a JGD and of course, Inspector General of the Ancient and Accepted Rite in this District.
Past Ranks were awarded to W Bro Sam Judah as PJGD, to Simon Atkinson and Paul Harper as PAGDC and to W Bro Andrew Calvert as PGStB. My Deputy, Bill Fisher, was promoted to PGSwdB.
I think they all deserve our congratulations
The delivery of Reports in Lodges can be very time consuming and I regret to say that on many occasions they are not of particularly good quality. I am quite happy for lodges to no longer have an Almoner’s Report or Charity Steward’s Report on the Order of Business, provided such Reports are submitted in writing to the Lodge Secretary at every meeting and circulated to all brethren with the Minutes. With regard to the Chapter Report, I would ask that be left on the Order of Business, unless the Lodge appoints a Royal Arch Representative who would then report only periodically at the request of the Worshipful Master.

At my Installation Meeting I referred to the urgent need to recruit good men – only good men – and to retain them. Brethren, that needs to be our No 1 priority. Whilst all lodges now appoint a Lodge Mentor, I am not convinced that all Lodge Mentors realise the enormity of the responsibility they have accepted. The loss of even one good man as a result of neglect is something, as a caring organisation, we should be ashamed of. Some mentoring is not fit for purpose and it is a problem we shall need to address. The Provincial Executive is to hold its first Recruitment and Retention Strategy Meeting, when the Executive will be joined by our Provincial Grand Mentor and the Provincial Communications Officer. There is a need to talk with the public about our Freemasonry in an informed, but down to earth way, and the Executive will shortly be selecting brethren from all areas to participate in the project and work within the Provincial team under the direction of an APGM.

Brethren, I think many of you are aware that I support a particular football team that has rather an important match today. Whilst I could not persuade the FA to change the date of the Cup Final, I did prevail upon then to delay kick-off until 5pm. The fact that I am here today rather than at Wembley Stadium shows just how much I enjoy the company of each and every one of you. I am very proud to be your Provincial Grand Master and consider it a great privilege.