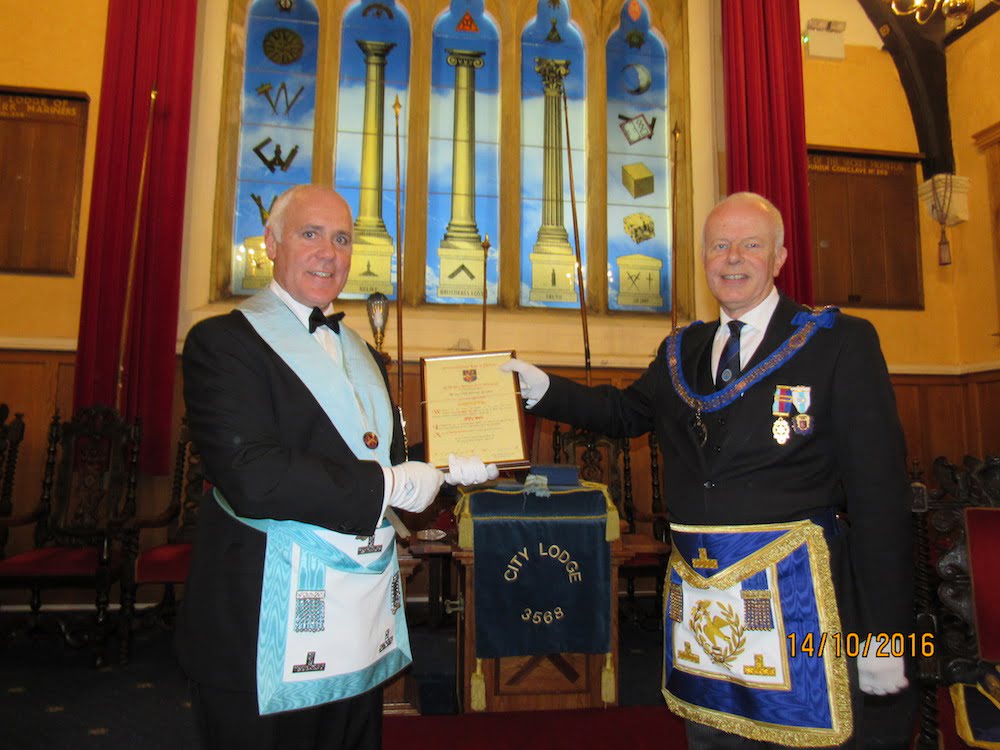 At the last regular meeting of City Lodge meeting in Old Elvet, Durham the brethren were joined by the Assistant Provincial Grand Master, David Sanders Hay. David was there to make a presentation of a Provincial Grand Lodge Certificate for 50-years continuous service to Freemasonry to Norman Brookes.

With changes in his domestic circumstance and health the recipient now resides in Buckinghamshire. However, in the true masonic manner, although absent he was fondly remembered by all present as David Hay recounted not only his contribution to Freemasonry and the community but gave the brethren an insight to Norman, the man.

Norman was born in Bolton, Lancashire 5th January 1928 and educated at the towns Grammar School. He was sixteen years old when he joined the Merchant Navy and served on the HMMS Highland Brigade during the last year of World War Two. Actually, he was in New York on the day that the War ended and has many happy memories of the celebrations with the American ladies. In fact, Norman recently received his Service Medal from the Government in recognition for his contribution with the military. Norman remained in the Merchant Navy for a further two years after the War during which he saw much of the world.

He attended a Teacher Training College in Cheltenham where he met a young lady named Margaret Brice, who was originally from Durham. She was attending another college in the same town and Margret was the niece of Joe Brice, who just happened to be a member of City Lodge. (it’s a small world).

Norman married Margaret and moved to Sadberge, near Darlington, where Norman became a teacher. So began a successful career in education. He went on to become Headmaster of a school in Billingham which at that time was part of County Durham. He retired in 1992 and was invited to become a member of staff at Durham University, both as a lecturer and a mentor.

Norman and Margaret celebrated their 67th Wedding Anniversary this year. They have one daughter Susan, who married a member of Clivedon Lodge in Buckinghamshire. Sadly, Susan’s husband died suddenly just a few years ago, and Norman and Margaret moved to Buckinghamshire to be near Susan and family. They have a grandson, who is a graphic designer and a granddaughter who is a chartered accountant.

Norman was thirty eight when he was initiated into City Lodge on the 9th of June 1966, having been proposed by Arthur Bramwell and seconded by Joe Brice. He became Worshipful Master of the Lodge in 1978 and was elected as an Honorary Member, last year. In 2009 he joined Trinity Lodge and latterly he joined Clivedon Lodge in Bucks were he now resides. In the Royal Arch Chapter, he was exalted into City Chapter in November 1976 and resigned in 1991. For his service to the Craft, he was appointed Past Provincial Assistant Grand Director of Ceremonies in 1987.

Norman has enjoyed a full and active life. As well as his career and Masonic interests, he served as a Magistrate in Darlington until his seventieth birthday in 1998. Additionally he has enjoyed many years playing golf and taking part in amateur operatics.

Before presenting the certificate to the Worshipful Master of City Lodge, Nigel Watson the Assistant Provincial Grand Master stated that unfortunately both Norman and Margaret suffer from the early onset of dementia which is the reason that Norman was unable to be present to receive his certificate in person. However, he is very well remembered by the brethren of City Lodge who hold him in high regard and are proud to have such an illustrious man as a long serving member of their lodge.