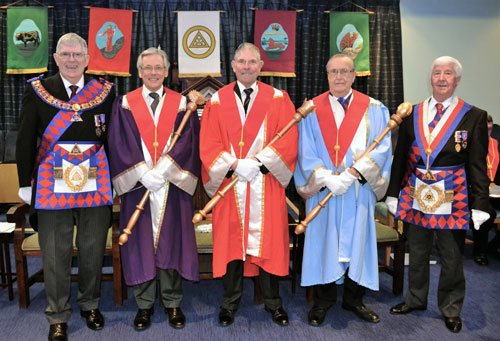 A “wonderful convocation” were the words used by the Grand Superintendent Tony Harrison when he attended the 17th annual installation convocation of Knott End Chapter No 8674 as its principal guest. The occasion was further enriched by the presence of not one, but two Assistant to the Provincial Grand Principals in the persons of Christopher (Chris) Butterfield and David Randerson.

Supporting Tony on this occasion were grand officers Christopher Band, Lancaster Group Chairman Jim Wilson and Keith Kemp, together with acting Provincial officers Neil McGill, Nigel Parrish and Stephen Jennings. In addition, Scott Devine the group secretary, was also present. Coordinating events effectively both in the temple and at the festive board was the Provincial Deputy Grand Director of Ceremonies Neil MacSymons.

On being introduced to the Grand Superintendent as he entered the chapter, the first principal Bernard Snape welcomed Tony and as is traditional offered him the sceptre, saying “I have great hope that you will keep it”. Tony humorously replied, “I do really need to return it as all the other chapters I attend perform their ceremonies differently, so please accept it back”. Following the return of the sceptre the installation ceremony commenced. In what can only be described as a great team effort. The ceremony saw Arthur Laycock installed as first principal, Allan Brown taking the purple robe of the second principal and John Reed the blue robe of the third principal.

A tradition at Knott End Chapter is to have the installing principals execute the relevant robe addresses. Hence, the robe addresses to the first, second and third principles were delivered in fine fashion by Bernard Snape, Arthur Laycock and Allan Brown respectively. A number of other superb addresses were also presented, some of which are rarely seen. John Thornton, the chapter treasurer, gave a wonderful address to the immediate past first principal Bernard Snape; the addresses to the three principals and the chapter officers were conveyed with great style by John Chesters and Christopher Band respectively, whilst the address to the companions was presented by Chris Butterfield with consummate ease and perfection.

At the completion of the ceremony the Grand Superintendent Tony Harrison rose to offer his sincere congratulations to the three principals on achieving their respective chairs. It was, in Tony’s words, “a wonderful convocation. Haven’t you all done well”. Tony was also exuberant in his praise of Bernard Snape and the chapter director of ceremonies Ernie Gavan for the work they had undertaken to achieve such a successful ceremony. Tony was delighted to accept a number of cheques for charitable and worthy causes. The beneficiaries of this generosity were revealed to be the Masonic Charitable Foundation 2021 Festival £300 and Heartbeat £200. On their behalf, Tony expressed grateful thanks.

At the festive board held in the superb Wyrebank Banqueting Suite, Chris Butterfield responded to the toast to the grand officers by firstly congratulating the chapter officers for all their hard work in making the ceremony so enjoyable. Chris then moved to toast the health of the Grand Superintendent by expressing his delight at being in his company, adding that Tony spends many hours promoting the Province on our behalf and always with a smile and adding, “it was delightful he could join us today”.

In replying to the very complimentary toast to his health by Chris, Tony first expressed his pleasure on an excellent evening and hoped all the companions present had also enjoyed it. Tony thanked the grand officers and the Provincial team for their support on such a special occasion, as well as all the group officers. Tony then expanded upon a number of issues, in particular the need for all companions to consider themselves membership officers and “to try and encourage craft Masons to seriously consider joining the Royal Arch and complete their journey in Freemasonry”. Moving on to the launch of the Masonic Charitable Foundation 2021 Festival it was Tony’s wish that all the companions present would support this newly formed charity and make sure it has enough money to operate successfully over the years to come – to all our benefit. At this juncture, Tony voiced his appreciation for the money donated to the MCF 2021 Festival by the chapter, expressing that he “appreciated their generosity”. In conclusion Tony conveyed his hope that “the companions of Knott End Chapter had a wonderful Masonic year and that they enjoyed their Freemasonry to the full”.

Following an inspiring toast to the three principals by Bernard Snape, a delightful performance of the principals’ song was given by John Chesters, the chapter mentor. Responding to these tributes, Arthur Laycock thanked a number of fellow companions who had been instrumental in guiding his progress, especially Carl Hayhurst who had encouraged him to join Knott End Chapter. Upon giving his final thanks of the evening, Arthur presented Tony, on behalf of Knott End Chapter, with a bottle of whisky.

The enjoyment of the evening was further emphasized by the announcement that the raffle had raised a total of £183.

Article and photographs by Paul Thompson.