Early afternoon on Friday 15th April, 18 East Lancs Mark Masons, some accompanied by their wives and partners (total of 35 in all) flew from Manchester to Vienna to visit Lodges that were already frequently attended by W.Bro Cyril Kennerley and W.Bro. David Wood, both members of Keep Mark Lodge No 911 which meets in Clitheroe. The Austrian Lodges were New Quarries Lodge of Mark Master Masons No.1903 on the Register of the Grand Mark Lodge of England and Wales and its Districts and Lodges Overseas and New Shores Lodge of Royal Ark Mariners which is moored to New Quarries Lodge of Mark Master Masons.

The visit was arranged for interested Brethren to attend meetings of the Lodges to promote friendship and brotherhood and to understand more about Masonry in Europe. New Quarries Lodge,(EC) was founded in 2009 in Vienna and already has over 100 members and a long list of potential candidates for Advancement.

The membership is made up of Masons from many countries who have been assigned by companies/universities etc. to posts in Vienna for periods of time and want to continue with their masonic activities. At the latest count there were over 15 different nationalities including most European countries, USA, West Indies, Sri Lanka etc. One common factor is that all the brethren speak English, some better than others, and English is used in all ceremonies. The Lodges hold regular meetings at Palace Franz-Stephan von Lothringen (“Kaiserhaus”) located in the centre of Vienna. 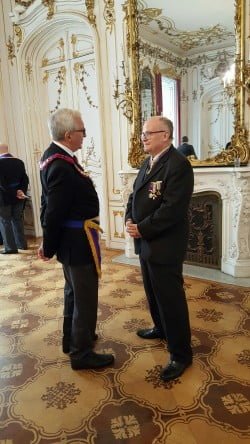 Immediately on arrival, two of our party, V.W.Bros John Barlow and Stan Bibby, were driven to Rosenau Castle, a 2 hour drive to the west of Vienna to attend a demonstration of the First Degree ceremony by the brethren of ORMUS Lodge#4, Orient Rijeka of the Grand Lodge of Croatia with the permission of the Grand Master of the Grand Lode of Austria. The ceremony took place in the 18th Century Temple rooms at Rosenau Castle which is also the home of the Austrian Masonic Museum. On return to the hotel in Vienna they reported that they were given a very warm reception, had thoroughly enjoyed the ceremony and were very impressed by the surroundings at the Castle, particularly the ancient lodge rooms. 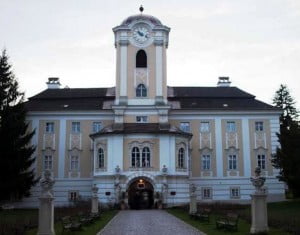 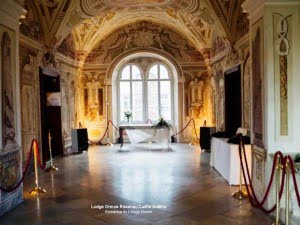 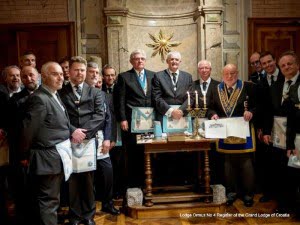 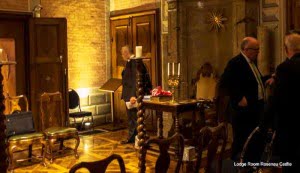 The remaining members of the party, after checking in at the Hotel Das Tigra proceeded to visit the numerous bars, cafes and restaurants in Vienna to enjoy a pleasant evenings relaxation.
Saturday morning arrived and as it was normal practice for the two Lodges to meet on the same day, after a ten minute stroll from the hotel, most of our party arrived at the meeting place, “Kaiserhaus” early to view the very splendid Lodge rooms.

The New Shores Lodge of RAMs held the first meeting at 11.00am and the room was comfortably full. The work, accompanied by live violin and cello music throughout the meeting, involved the Investment of one brother with the regalia of R.A.M.O.G.R., the presentation of R.A.M. Certificate to another and a ballot for a new member followed by his Elevation which was performed in an excellent manner. There followed some standard Lodge business and finally the Music Master explained his choice of music, all of which had English connections.

After a beer and snack lunch at a café very close to the Lodge rooms in fine sunny and warm weather the Masonic business continued with the meeting of New Quarries Lodge of MMMs No 1903. Our Assistant PGM’s were invited to join the officers of the Lodge led by WBro Andreas Herlinger in the entry procession and after a warm welcome to the visitors VWBro Jeffrey Huddart responded appropriately and presented a set of Gavels to the WM which were very well received. During the Ceremony he also responded to the various salutations on behalf of the East Lancs Brethren.
At this point the meeting got underway with a roll-call followed by approval of the minutes. He presented two Grand Mark Lodge certificates to two brethren of the Lodge. At the second rising VWB Huddart addressed the brethren in German, which seemed to be a surprise to the Austrian brethren but greatly appreciated. There was a ballot taken for a new member of the Lodge which proved unanimous and he together with a previously elected brother were advanced by the Worshipful Master and Oficers of the Lodge in an excellent manner, W.Bro. Kennerley acting as Chaplain and WBro Wood presenting the Working tools of a MMMason. 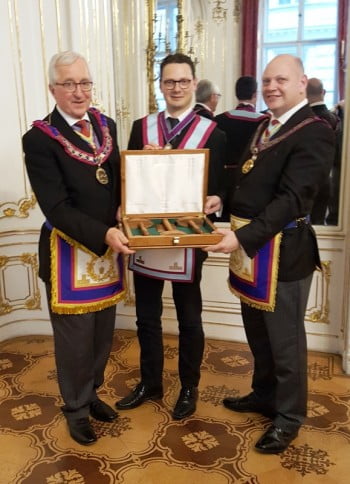 Bro Silviu Dascal gave a personal talk prepared for this meeting. Bro Dascal had a long day; he had driven from Timisoara in Romania, a seven hour drive mainly on motorways and after the meeting he drove back home. Dedication!! He does this for every RAM and Mark meeting. His talk was very well researched and presented and appreciated by all in the Lodge. There followed some usual Lodge business and finally the Music Master explained his choice of music for the meeting all of which again, had English connections.

That evening there was a banquet held for the Ladies at Vienna’s foremost hotel Sacher Hotel, which is also the origin of “Sachertorte” a sponge cake completely covered with dark chocolate and a famous delicacy of Austria. The Brethren and Ladies circulated with the people from the Vienna Lodges at a reception before the meal and a very convivial ambience quickly developed. An excellent meal with ample local wines was enjoyed by all. At the end of the meal, W.Bro.Tony Davies proposed a Toast to the Ladies some of whom responded with thanks.
Sunday was spent sightseeing in the beautiful city of Vienna and the famous Spanish Riding School seemed to be a popular attraction. The evening was spent enjoying the many excellent bars and café’s that the city is famous for.
Monday morning we returned to Manchester convinced that the visit had been most enjoyable with considerable advancement in our Masonic knowledge.

WBro.C.Kennerley Keep Lodge of MMM’s No 911

All photos by John Barlow.