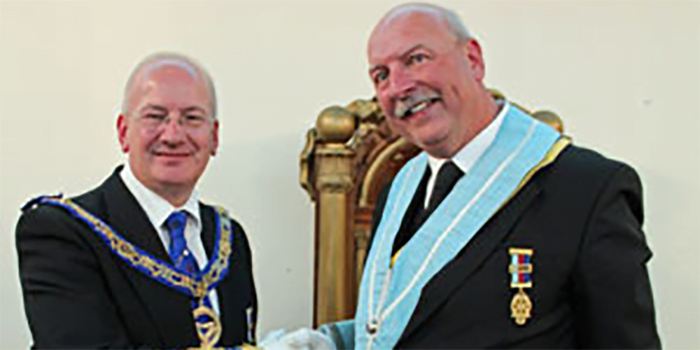 Ormskirk Masonic Hall was well attended when over 57 members and guests came together to witness the installation ceremony of Stanley of Bickerstaffe Lodge No 3511. The master David Paton welcomed everyone to the ceremony before saying: “It is usual for us to commence with singing the opening ode, but as you can see we have no organist, and at the moment we have no master elect, this brethren could be a very interesting evening.” 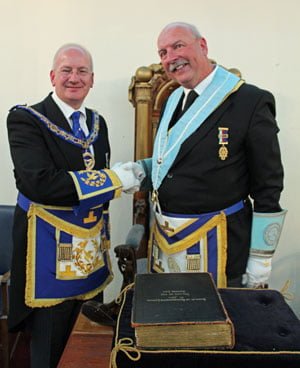 David undertook the usual business of opening the lodge before asking all to stand in respect of departed merit for the passing of Riche McKay, who was the first adjoining member of the lodge and who recently passed away at the age of 105 years young.

A ballot was then taken to admit Kevin Thomas Chicken PPrSGD as a joining member and following a successful outcome he was welcomed into the lodge by the WM.  It was during these proceedings that the two wayward members Eddie Clarke (lodge organist) and his son Andrew Clarke (master elect) arrived, much to everyone’s relief; especially that of David the installing master.

Peter Graham, the lodge DC, led the deputation of distinguished guests into the lodge room and affected the introductions prior to appropriate salutations being made. David then asked Bill Follett to occupy the position of senior warden, Ray Tompsett that of the junior warden and James Roberts to undertake inner guard. Following this Eddie Clarke presented his son Andrew as master elect. David and the installation team proceeded to carry out the ceremony with a calm and dignified competence befitting a well-respected Mason.

An explanation of the third, second and first degree working tools were delivered by James Roberts, Malcolm Sandywell and Jarrod Lloyd respectively. Equally, impressive ritual was performed by experienced Mason Eddie Clarke with the address to the master. Robert had the privilege of presenting the address to the members of the lodge which he undertook with his usual warmth and sincerity.

At the completion of the ceremony, Robert wasted no time in passing on the congratulations and best wishes of the Provincial Grand Master Tony Harrison to the new master and his immediate past master. He also made a particular mention of the work done by the three brethren who had delivered the explanations of the working tools and to underline his admiration for their work.

Following on from this fine and well received tribute, the guest of honour himself was the recipient of the next item of good news in the form of cheques and details of charitable donations made by the lodge. He was both delighted and gratified to announce, with the permission of the WM, that a grand total of £1,415 had been raised, with the main beneficiaries being; £500 to West Lancashire Freemasons’ Charity, £150 to Friends of Tythebarn, £100 to Alzheimer’s Society, £60 to Alder Hey Hospital, £55 to Ormskirk Well Being Centre and £250 for the 2021 Festival. Robert announced that the lodge had already donated £300 to the Tercentenary Appeal. Robert then took the opportunity to thank the brethren for their immense generosity.

This is the first time in the chair for Andrew at Stanley of Bickerstaffe Lodge, having previously been master in Aughton Lodge No 7996 in 1996 and Lombardian Lodge No 4887 in 2005. Following the conclusion of the ceremony the brethren retired to enjoy the delights of the festive board, all agreeing that they had witnessed an interesting and enjoyable ceremony carried out to the very highest standard.