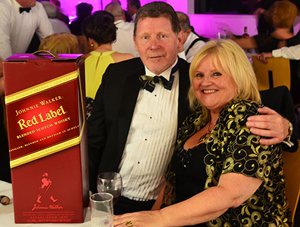 The stunning panoramic views of the historic town of Lancaster provided the backdrop when the 2016 Lancaster Group Ball was held in the Gateway Suite at Lancaster’s University of Cumbria, at which 120 brethren and their partners were treated to a wonderful banquet.

Frank and Tricia Heath with the ‘whisky draw’ star prize

Special guests attending on the night included the Provincial Grand Master Tony Harrison and his wife Maureen together with APrGM David Grainger with his wife, Beryl. AtoPrGPs Chris Butterfield also joined them in the company of his wife, Marie.

Lancaster Group Chairman Jim Wilson who was accompanied Mrs Pat Parkinson, was delighted to welcome everyone and hoped it would be a ‘night for enjoying ourselves’. Jim paid tribute to the social secretary Scott Devine for all his hard work in organising such a successful evening and thanked Alan Brown, who was director of ceremonies for the evening, for making sure the evening was professionally conducted. Jim also made special mention of thanking ‘our friends’ from the Furness and South Lakeland Group for attending, and then went on to explain the new appointments which had been made within the group.

A regular feature of the Lancaster Group Ball is the ‘whisky raffle’ which was again well supported as was the general raffle, which together raised the magnificent sum of £845. The star prize in the raffle was a Kindle Fire which was won by Dave Goodwin. The star prize in the whisky draw was a gallon of Johnnie Walker Red Label whisky which this year was won by Frank Heath.

Entertainment and music for dancing for the evening was provided by Paul Day who ensured that the dance floor remained full until the evening ended.

A view of historic Lancaster provided the backdrop to the evening’s entertainment.