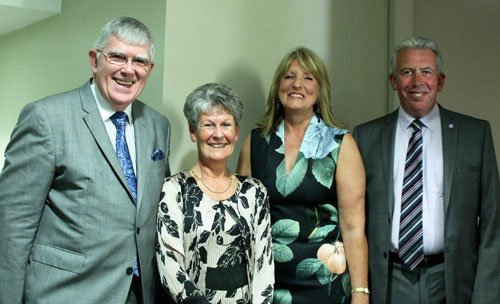 The 17th West Lancashire Freemasons’ Charity annual cabaret and dinner, was held at the Southport Theatre and Convention Centre. The event was supported with 257 ladies and brethren attending this prestigious event.

Pictured from left to right, are: Tony and Maureen Harrison and Debbie and Mark Matthews,

The President of the charity, Tony Harrison (Provincial Grand Master) and his wife Maureen were the principal guests of the evening, which is organised by the WLFC as an opportunity for Masons throughout the Province to celebrate the work of the charity.

The evening began as brethren arrived with their ladies at 5pm for a ‘chat and a drink’ with friends – both new and old before taking their seats for dinner.

At 5.45 pm Mark Barton, who was acting as DC for the evening. asked the ladies and brethren to stand to greet Tony (President of the Charity) and Maureen Harrison who were accompanied by Mark Matthews (Chairman of the WLFC Trustees) and Debbie Matthews, with the party being led into the hall by Mark Barton.

The guests then stood for Grace given by Jenifer Levick, they then enjoyed a three course dinner of: Melon with a sweet mango coulis, followed by Baked supreme of Salmon with hollandaise sauce, seasonal potatoes and vegetables with Baked banoffee tart with cream, with freshly brewed coffee and mints to finish.

After dinner the loyal toast was proposed by Andrew Whittle. Bob Povall proposed the toast to the charity – he said: “I am very proud to be a Freemason for many reasons – one of which is the way we care for and support others.

We are one of the few Provinces which has its own Provincial charity, the WLFC which I am pleased to report gave over £500,000 in grants last year – 85% to Masonically linked recipients and £70,000 to non-Masonic causes.

Mark Mathews responding to the toast said: “I am very proud to be a Freemason for many reasons – one of which is the way we care for and support others.

We a wonderful team in the Huyton office, they are a group of hard working, dependable and dedicated volunteers and I thank them all.

I am so proud of our WLFC and I sincerely thank the trustees, the executive team and Ian Douglass, Chief Executive Officer who all freely give of their time and energies in running and managing our very own West Lancashire Charity..

After a short break the cabaret got underway with compere David Anderton introducing the Rhos Orpheus Male Choir who entertained the audience with a range of songs.

After a short break David introduced the Rookies who sang a mix of swing, soul and disco which had the guests on their feet, dancing until the end of the evening.

The Rookies entertain their audience.