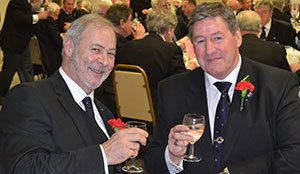 It might have been a ‘Grand Day Out’ for Nick Park’s characters Wallace and Gromit in the 1989 film of that title but in a similar manner the Royal Arch companions of Lancaster Group had an equally grand day out in Southport.

Just to clarify the differences, they weren’t attempting to land on the moon in search of cheese; they were ‘over the moon’ to be attending the meeting of Provincial Grand Chapter to witness the appointment and promotion of several colleagues. Taking up one of the ‘weightier’ offices was Neil McGill group vice chairman (designate) who was appointed Provincial Grand Sword Bearer.

The Grand Superintendent Tony Harrison conferred honours on 16 members of the group at the meeting held at the Southport Theatre and Convention Centre and a large contingent travelled from the Lancaster area to show support for both Tony and the celebrants at the meeting.

After a very colourful and visually impressive ceremony many of the companions joined with other Royal Arch Masons from the Province for a celebration banquet in the main dining suite. The toast to the newly appointed and promoted companions was proposed by our own AtoPrGPs Chris Butterfield and responded to by the newly appointed PrGSN Jim Miller.

Some of the companions from the Lancaster Group enjoying their ‘grand day out’.