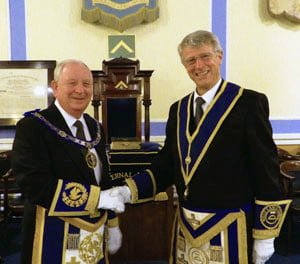 In a week which saw many West Lancashire Freemasons celebrating their being honoured at Provincial Grand Lodge, one notable Mason was celebrating his own very special week. Much more than others, Philip James Lees of Fraternal Lodge No 4531 had good reason to celebrate. The beginning of the week heralded his first celebration; 50 years in Freemasonry. The end of the week: a golden wedding anniversary. It was a week of pure gold for Philip and his wife Christine.

But the two of them had even greater reason for celebration. Having been diagnosed with prostate cancer in 2007 and informed that the tumour was inoperable, incurable, highly aggressive and life-limiting, Philip undertook a three year course of hormone therapy and 38 sessions of radio therapy before being informed that most of the cancer had been eliminated. Good news indeed! But that wasn’t good enough for Philip. He conducted his own research into the malady. After seeking sources in America, he decided to stimulate his immune system and formulated an action plan. The outcome of his plan exceeded all expectations and Philip was discharged by his oncologist in 2012. This hasn’t meant however that Philip has relaxed on his plan. He still exercises vigorously five days a week and regularly plays golf.

Throughout his battle with cancer, his wife Christine has been a rock of support and encouragement to him. After what they have both been through, their golden wedding anniversary is an extraordinarily special occasion.

Modest, unassuming and a perfect gentleman, Philip is a man blessed with determination, grit and strong moral fibre; qualities that Assistant Provincial Grand Master Harry Cox underscored during the celebratory evening of Philip’s 50 years in Freemasonry. Indeed, in his closing remarks, Harry referred to Philip as a man of consummate integrity and commitment. Harry was right. Seldom can the phrase have been used with more appropriateness.

Although Harry was offered the gavel of the lodge immediately following his entrance, he graciously declined it as he was aware that the lodge members had arranged a little something that was out of the ordinary at golden jubilee celebrations. Having opened the lodge in all three degrees in preparation for Harry’s entrance, the master of the lodge John Haines closed each degree by virtue but, in doing so, the working tools of each degree were presented to Philip. In the third degree, John Houghton was the elected choice whilst Paul Partington and Dennis Mackay presented the second and first degree working tools respectively. All three were magnificent; sincere and lucid. They were a perfect pre-cursor to Harry’s address and summary of Philip’s life. 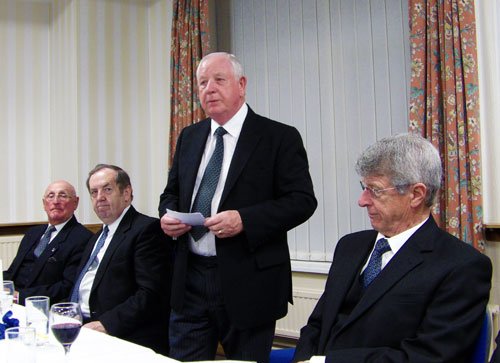 Harry Cox (standing) thanked his audience for their support on Philip’s special day.

Those who have had the pleasure of hearing Harry relate the life of a celebratory Mason will be only too aware of the fine job he does. He is the ideal narrator for such occasions. He approaches the task with joyous camaraderie and enthusiasm. He is comfortable and at ease in a lodge and imparts that enthusiasm to those present, rather as if it is a contagious condition.

With logical progression, Harry related key events in Philip’s life, introducing it with interesting and entertaining facts about his year of birth. Born on 22 February 1942, the year witnessed the first arrivals of US troops into the UK after America’s entry into World War II. It was the year in which Singapore surrendered to the Japanese; the year in which King George announced the award of the George Cross (the civilian VC) to Malta following four months of almost continuous bombing by the Luftwaffe.

On the 25 August of that year Prince George, the Duke of Kent, who was Grand Master of the United Grand Lodge of England was killed in a flying boat crash during a flight to Iceland. He had been Grand Master since 1939.

On a lighter note, Harry reminded his audience that hotels and public baths were required to mark baths with plimsoll lines, restricting the depth of water to less than five inches and to further conserve water by sharing baths.

Philip’s early years were spent in Stockport until, when after the war, his parents Albert and Ethel Lees bought a hotel in Station Road, Blackpool where he lived until his marriage to Christine on 14 May 1966. During those years, Philip attended primary and junior schools at Thames Road and then went to Arnold School. Later he attended evening classes and undertook correspondence courses to pass banking exams, attaining an Associate of the Chartered Institute of Bankers status in 1969. 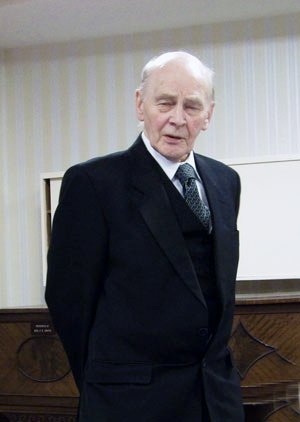 Harold Smith presenting a sincere and moving tribute to Philip.

His Masonic career began when he was initiated into Fraternal Lodge on Monday 9 May 1966, just five days before marrying Christine on Saturday 14 May. Their wedding day happened to coincide with the FA Cup Final and football enthusiasts amongst the wedding guests retired to Christine’s parents’ home to watch the match on TV after the wedding formalities had concluded. Incidentally, Everton beat Sheffield Wednesday 3 – 2. It was good news for Everton fans but for England fans, the victory paled into relative insignificance when England beat West Germany 4 – 2 later in the year to raise the World Cup, the first and only time for England to be world champions – and it has never been forgotten!

Philip and Christine moved to their first house in Normoss and had two daughters, Katherine who was born on Philip’s birthday 22 February 1968 and Sarah on 15 January 1970. Both are now personal assistants; Katherine in finance in the City of London and Sarah in horseracing in Newmarket. Sarah has two horses of her own and has represented England in the Home Internationals Endurance Championships.

Philip’s and Christine’s house in Normoss was to be the first of many. Philip’s role with the Midland Bank was to see him relocated on a number of occasions to various towns in the north of England. Christine got to know the signs that another move was on the cards. Arriving home with a bunch of blue irises was Philip’s sweetener to announcing that another move was planned.

Following Philip’s initiation into Freemasonry in May 1966, he was passed in October and raised in December of that year. His father Albert was a Mason and Provincial officer, being a member of Lodge Fidelitas No 4706 in the Province of East Lancashire. He was also director of ceremonies of Peace and Unity Chapter No 3966 in Blackpool for many years.

But it was work colleagues who proposed and seconded Philip into Fraternal Lodge. Tom Winder and Jack Benstead were co-workers of Philip’s at the Midland Bank. In March 1977, Philip became master of his lodge, his father presenting him at the installation ceremony and delivering the address. It was, no doubt, a proud moment for his father for Philip was the youngest master to have been installed into Fraternal Lodge. 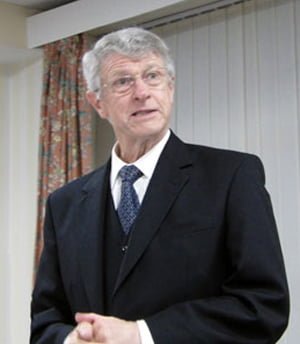 Philip Lees was visibly moved by the ceremony and the warmth of his welcome.

Despite his numerous relocations with work commitments, Philip managed to remain a regular attendee at lodge meetings. Preston, Southport, St Helens, Liverpool, Wigan and the Isle of Man were just some of the branches to which he was sent. Nevertheless, he became lodge auditor in 1986 and was appointed to Provincial rank of Past Provincial Assistant Grand Director of Ceremonies in October of that year but sadly, it was one month after his father passed away.

In 1999 Philip became treasurer of his lodge, having retired in 1994 and was able to bring his expertise into streamlining and improving the presentation of the lodge accounts. In 2003, a Provincial promotion gave him the rank of Past Provincial Deputy Grand Superintendent of Works.

Outside of his Masonry, Philip has a holiday home in Cyprus and is a keen golfer but also follows another of his passions; motorcycles, presently owning a 1,170cc flat-twin engine, six-gearbox and shaft driven BMW R1200RT Tourer – that is a machine for which one needs to be fit and have plenty of grit.

On completion of Harry’s review of Philip’s life, vice chairman of Blackpool group John Turpin read out the customary certificate awarded by the Provincial Grand Master Tony Harrison. It was proudly presented to Philip by Harry who closed by saying: “I consider it both a privilege and a pleasure to have been able to take part in such a happy and rewarding event.”

Accolades continued to flow at the festive board that followed the formal part of the evening. Harold Smith, who Philip had installed as master of Fraternal Lodge in 1978, paid tribute to Philip in an eloquent and sincere speech while toasting his health. In response, Philip thanked Harry Cox, Harold Smith and the members of the lodge for the celebration saying: “It brought back many memories; some happy, some not so happy, but it was a wonderful and moving experience.”

Philip and Christine celebrated a wonderful golden week and Fraternal Lodge and Harry Cox made every effort to ensure that Philip was given a 24-carat evening to start the week off.