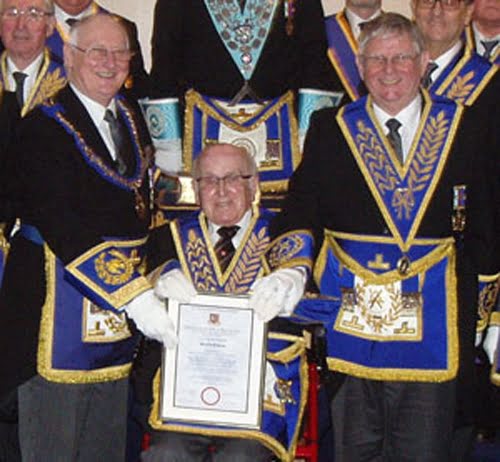 Brethren of Leyland Hesketh Lodge No 986 held a very warm and convivial meeting and Leyland Masonic Hall hadn’t seen so many members and visitors for quite some time. They were present to witness the 50th anniversary celebration of one Dennis Onslaw.

Pictured from left to right, are: Ray Martland presenting Dennis Onslaw with his certificate along with Stewart Seddon.

Ian Heyes, the worshipful master, opened the lodge and welcomed Assistant Provincial Grand Master Ray Martland into the lodge room. He offered Ray the gavel of the lodge and as is customary on such occasions, he retained it. Taking his seat Ray asked whether everyone was sitting comfortably and then began the biography of Denis Onslaw.

Ray had been invited over to visit Marion and Dennis at their home in Stonyhurst, Chorley and as he arrived Dennis was standing at the window with a big smile on his face. He turned to Dennis and started by saying: “What a wonderful milestone on your Masonic journey that, Dennis, you can now add golden jubilee to your portfolio.”

Ray very quickly got into his stride and he immediately took everyone back to 1934 which was important in history for a number of reasons. George V was on the throne; Ramsay MacDonald was Prime Minister of a coalition government; In March of that year The Betting and Lotteries Act was passed prohibiting the sale of lottery tickets; Meccano introduced the first Dinky Toys; The Queensway Tunnel was opened beneath the River Mersey and Stanley Matthews made his debut in the England team and thus began a 23 year international career. There were several contemporaries mentioned in Ray’s historical overview: Richard Bryers and Tom Baker – actors; John Surtees – racing car driver; Henry Cooper – boxer and, as Dennis came into this world, Edward Elgar, Gustav Holst and Frederick Delius – all music composers said goodbye to it.

Over at Moor Road in Chorley, Dennis was born to Hannah and Frank Onslaw on 21 June 1934. Frank was a bus and coach driver for a company called Freemans, which later would be taken over by Ribble. The family then moved house to Tennyson Avenue about one and a half miles from Moor Road. Incidentally, Dennis’s father was also a footballer and he played for Blackburn Rovers, however a very serious injury to both ankles ended a potential career for him and Dennis’s dad carried those scars all through his life.

At age five Dennis was off to school at All Saints Primary before moving to Duke Street Primary a little later. He passed the scholarship to Chorley Grammar School where maths was a favourite subject. One of Dennis’s early recollections is when a friend took him to Preston North End to watch a football match and when his father heard about it; he took him to watch ‘a proper team’ at Blackburn where he is still a season ticket holder. Unfortunately for Dennis, and Blackburn, they lost 6 – 1 to Middlesbrough.

Later on in school life Dennis would pass the school certificate before staying on at the Grammar School to gain advanced GCE’s in maths, physics and chemistry. Leaving school he went on and joined NORWEB as a student apprentice working at the Meter Test and Training Centre over at Walkden. Dennis attained fourth assistant at age 20 whilst attending the Harris Institute, Preston and also attended one day and one night each week in order to gain a Higher National Certificate in Electrical Engineering. Dennis eventually became a ‘Member of the Institute of Electrical Engineers’.

National Service in the RAF took Dennis training at West Kirby and then Weston Super Mare at RAF Locking where he took a course as a radar fitter. He also managed to win a competition for those in his shared billet by decorating it at Christmas time in a true brewery livery. Demobilisation came when he was 25 and he returned to the family home in Chorley and back to working at NORWEB. He steadily worked his way up to become construction manager for the area of West Lancashire.

Dennis met his wife Marion on his travels to Bolton, offering her lifts to Horwich Locomotive Works which was on his way. They eventually married at All Saints Church at Chorley on 4 February 1964, honeymooning in Chester. Before moving to a house in Weld Avenue they lived with Marion’s parents for a while and some while later they purchased land at Stonyhurst. They have three daughters, Caroline, Judith and Yvonne with three grandchildren; two girls and a boy.

Whilst Dennis worked at NORWEB he met a friend, George Bates, who introduced him to Freemasonry and he succeeded, where his uncle Ernest had failed, with Dennis being initiated into Withy Lodge No 7733 in January 1966. Dennis became master of Withy Lodge in 1974 and became treasurer and then secretary for a number of years. He was a founder member of the Phoenix Lodge of Installed Masters No 9206 and he also joined Lathom Lodge No 2229 and Quingenti Lodge No 8516. Now a member of Leyland Hesketh Lodge he was awarded his first Provincial office as PrGStwd in 1982 and subsequently he was promoted in 1985 to PPrGSuptWks and PPrJGW in 1987. Frank Cowburn the Assistant Provincial Grand Master at the time, asked Dennis to take on the role of Leyland Group Secretary. Dennis replied: “What do I have to do?” and the response was: “Oh, there’s nothing to it.” Grand rank came in 1991 to PAGDC which was followed by PJGD in 2004.

Ray commented during his recital of Dennis’s life: “Dennis, you are a member in many other orders and never afraid to have a bit of fun including the time when you were being pushed in a wheelchair around the outside of Wellington Park to raise funds for a festival.”

Stewart Seddon, Chairman of Leyland and District Group, read out a certificate to both Dennis and those present before Ray presented it to Dennis. The certificate is an acknowledgement of the Province of West Lancashire’s great appreciation of the half century membership of the Craft.

Once the lodge had been closed, everyone present retired to the dining room to continue with the celebrations. Ray congratulated Dennis once again on his marvellous achievements through his Masonic career and he wished him well for the future and pointing out that Dennis had served the Leyland Group for 21 of his 50 years as an executive officer. The evening ended where everyone parted having had a good meal and having shared in the celebratory evening with good fellowship too.