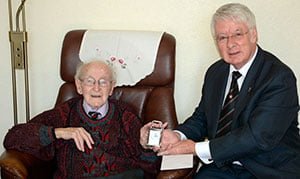 Celebrating your achievement of 50 years as a Freemason is always likely to evoke happy memories and a well deserved feeling of achievement but when you can also boast of reaching the ‘ripe young age’ of 98 as well there’s even more of a satisfactory glow illuminating the event. For Wellington Slater (Wally) there was an additional reason to celebrate, as on the very same day Longridge Lodge No 8077 marked its own golden anniversary. Another happy coincidence was that the very first initiate into Longridge Lodge in 1966 was Wally Slater!

Colin McNamee (right) presents Wally with a gift from the lodge.

Assistant Provincial Grand Master David Grainger and Lancaster and District Group Chairman Jim Wilson travelled to Wally’s home in Longridge to congratulate him on his marvellous achievement. They were also joined by Longridge Lodge WM Colin McNamee. Wally was delighted to welcome everyone into his home and was soon proving his phenomenal powers of recall as he related his early years in the area, working initially in the former local foundry before enlisting in the RAF for the duration of the Second World War. On leaving military service he joined Carefoot plc, a well known local company and occupied numerous administrative roles within the company until his retirement.

His Masonic career almost mirrors the establishment and development of his mother lodge. He was initiated into Longridge Lodge in 1966 as the first initiate and had the honour of being the first initiate to take the chair of the lodge in 1977. Wally remembers this year with particular fondness and recalls that he made many long lasting friendships during his year in office. His services to the lodge were recognised by appointment to Provincial rank and he currently holds the high rank of Past Provincial Grand Superintendent of Works. 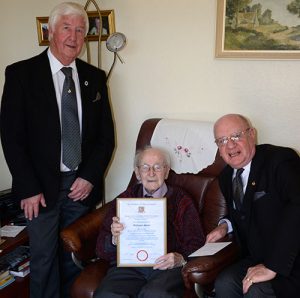 David Grainger expressed admiration for not only the contribution that Wally had made to Freemasonry over the years but congratulated him on his amazing memory and mental agility. David said he hoped that he would blessed with such good fortune if he managed to reach such a magnificent milestone.

He then presented Wally with a framed certificate that had been issued by command of the Provincial Grand Master Tony Harrison in recognition of the occasion. On behalf of the members of Longridge Lodge, Colin McNamee then presented him with a carriage clock as a token of the esteem and affection in which he is held by the lodge.

Wally generously thanked his visitors for their kind gifts and words of praise. He apologised for not being in sufficiently good health to attend the lodge meeting and anniversary celebrations later that day but handed the WM a letter that he asked to be read out to the brethren at the meeting and said that they would be in his thoughts on this very special day.