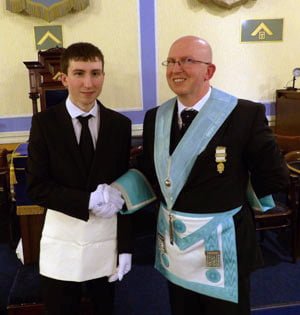 An initiation ceremony is a singularly special occasion; not only for the candidate but also for those in attendance. There is always a buzz in the air, a rumminess that raises the hairs on the back of the neck. Each instance is distinctive and every Mason present has extraordinary empathy with the candidate. We recall the emotions we experienced at our own initiation. We re-live the moment; the excitement, the trepidation, the pageantry. To some candidates the whole evening is overwhelming. To all it is unforgettable. That is the power of our ritual.

For the majority of us however, we can only imagine the intensity of emotions that must be experienced by a father and son when a Lewis is initiated into our order. That is something very special and uniquely individual.

It is little wonder then that the members of Blackpool Lodge of Integrity No 5864 turned out in force at Blackpool Masonic Hall, along with a generous number of visitors, to witness the initiation of Benjamin Jason Rodgers and support his proud father Colin, who vacated the junior warden’s chair to act as junior deacon and guide Ben through his ceremony.

In a sensitive textbook ceremony conducted by master of the lodge Joe Codling, 19 year old physics student Ben was initiated into Freemasonry in truly fine style. Adding variety to the proceedings, John Wall who is normally confined to the organ stepped onto the floor of the lodge to undertake part of the later ritual and demonstrated his versatility and excellence still further by reciting the charge after initiation. The sincerity, passion and fluidity of his delivery was exemplary; a performance that will remain in the minds of many of his audience for a long time. 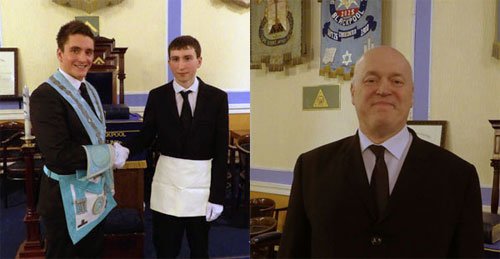 Additional addresses were equally memorable. Senior warden Kevin Croft produced a magnificent rendition of the investiture of the candidate with the distinguishing badge of a Mason and Allan Moore provided a flawless explanation of the working tools of an entered apprentice Freemason.

The highlight of the evening was undoubtedly however Colin’s address to his son as a Lewis; a moving piece of ritual which is rarely heard. Charged with emotion, it is poignant, stimulating and inspiring. And, despite the noticeable emotions, Colin performed it superbly.

And it was this part of the ceremony that Assistant Provincial Grand Master Harry Cox will most remember. It was the first time that he had heard the piece delivered and its impact on him was obviously inspiring. It just goes to show that Freemasonry is forever bringing surprises, even to the most experienced members of the fraternity. It was a first for Ben in many respects but it was also a first for Harry.

Much of the evening was, no doubt, confusing to Ben and memory of the contents of the ceremony somewhat hazy but he wasted no time in clearing any confusion. The following evening he attended a demonstration of an initiation ceremony at Great Marton Lodge No 3985 to underpin his experiences of his own big night. Now, that was a great start to Ben’s Masonic career.