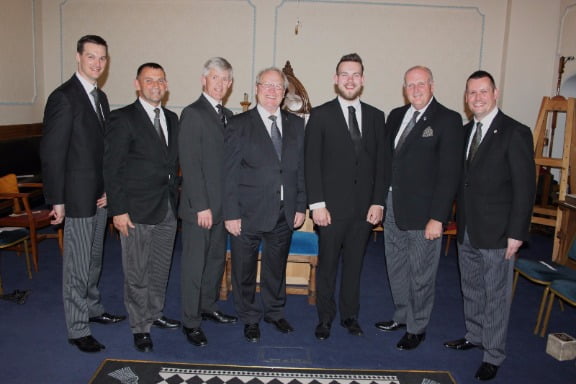 There was no “End of Term Feeling” at Baines Lodge No 7844 at their last meeting of the Masonic year. It was business as usual when Tom McMurdo was initiated into the lodge by David Thomas, who had been newly promoted to Grand Officer,

Worshipful Master Bill Singleton, delegated David Thomas to take the chair to perform the initiation ceremony as the candidate, Tom McMurdo, was proposed by David. It was a fine sight to see David wearing his new regalia as Past Assistant Grand Director of Ceremonies for the first time in the Lodge. Tom’s seconder, John Lee, who was invested the day before as Provincial Senior Grand Warden, was also wearing his new regalia for the first time in the Lodge. John assumed the office of Junior Deacon for the ceremony. Another member of Baines Lodge, Brian Tracy, was promoted and invested at Provincial Grand Lodge to Past Provincial Grand Superintendent of Works and he was congratulated by John Lee and the other brethren present.

A watchful eye was being maintained on the ceremony by Assistant Director of Ceremonies, Ryan Modlin, as David Edwards, the Junior Warden of the Lodge, delivered the explanation of the working tools of the First Degree and the Charge after Initiation in an exemplary manner. Senior Lodge member, Derek Parsons who will be celebrating 50 years in Masonry next year, gave an explanation to Tom on the Preparation of an Entered Apprentice. John Robbie Porter, Vice Chairman of the South Fylde Group, presented Tom with a letter of welcome from Group Chairman Ian Ward as well as an Initiate’s Information booklet. 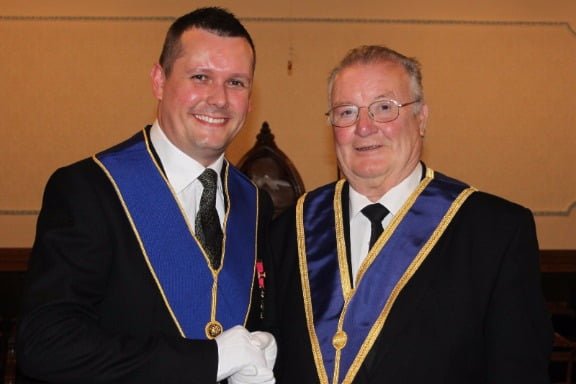 At the festive board, 64 people sat down to a hearty meal where £242 was raised in the raffle. Group Charity Steward Dave McKee was rather pleased with the amount as the proceeds were going to the Liverpool, Blackpool, Barrow, End to End sponsored bike ride. This is being organised by Dave and Ian Ward. This will take place over two days on the 11th and 12th of June 2016. The Lodges and Chapters of the South Fylde group have been asked to kindly donate the proceeds of one raffle to the bike ride, The money raised will then be split between the two Masonic halls in the Group.

After the meal, David Winder praised the contribution of so many people to the proceedings especially Tom McMurdo, who was in fine form when he responded to the toast to the candidate. 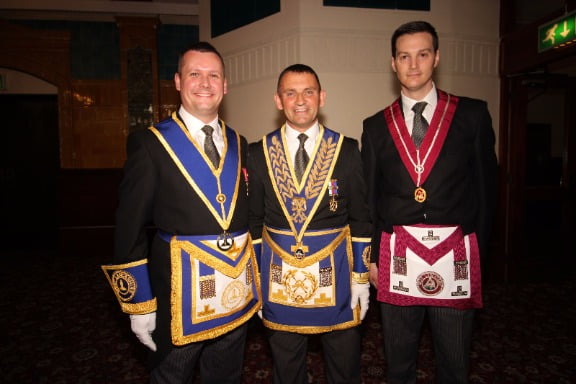 Pictured, from left to right, are: John Lee and David Thomas in new regalia, with Ryan Modlin.

Baines Lodge have enjoyed a busy year and this means that there is still much to do in the future. With this meeting being the last before the recess the “End of Term” feeling enjoyed by other lodges will be tempered at Baines as they contemplate learning future roles in the new season. Even so, all the Brethren departed happy, enjoying their Freemasonry, with a skip in their step.