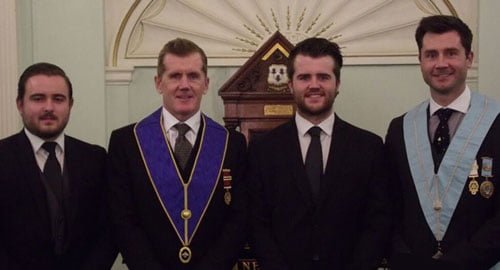 The latest member of Neptune Lodge No 1264 came not from the sea as one might expect, but from the sky, well ‘the cloud’ to be precise.

Pictured from left to right, are: Will Lunt, Peter Parry, Joe Parry and Adam Parry.

He noticed that the Neptune Lodge in Liverpool would be holding a meeting which would coincide with him being in the area on business. Adam promptly managed to make contact to see if there would be possibility of him attending.

Naturally, Tony was very pleased to receive such a request and Adam visited for the ‘Ole Englysshe Nyghte’, having been well and truly ‘proved’ by the junior warden. Adam’s enjoyed his visit so much, that when his younger brother Joe (who lives in Liverpool) showed an interest in the Craft, he did not hesitate to recommend Neptune No 1264 to him.

Happily, Joe was initiated in to the mysteries and privileges of ancient Freemasonry in exemplary style 12 months later and was superbly supported by not only his family, including his father Peter, a holder of London Grand Rank, but many other visiting masons including his best friend Will Lunt. A number of visitors came in support from a lodge in North Wales of which Adam is also a member. This is the Lodge of Rhuddlan Castle No 7737, which meets at Rhyl Masonic Hall, and this has resulted in a pleasant outcome, for a number of the members of Neptune Lodge in Liverpool intend to return the favour by visiting their installation this coming December.

Also warmly welcomed at the initiation ceremony of Joe was Assistant Provincial Grand Master, Mark Dimelow, who had previously expressed an interest to visit lodges in an informal setting rather than just at installations. Mark spoke very highly of the meeting and ceremony which he thoroughly enjoyed and expressed his satisfaction on how the lodge was working and how nice it was to see a number of guests in attendance.

Joe Parry with family and friends, Mark Dimelow is front row, fifth in from the left, while Joe is next but one on his right on the front row.