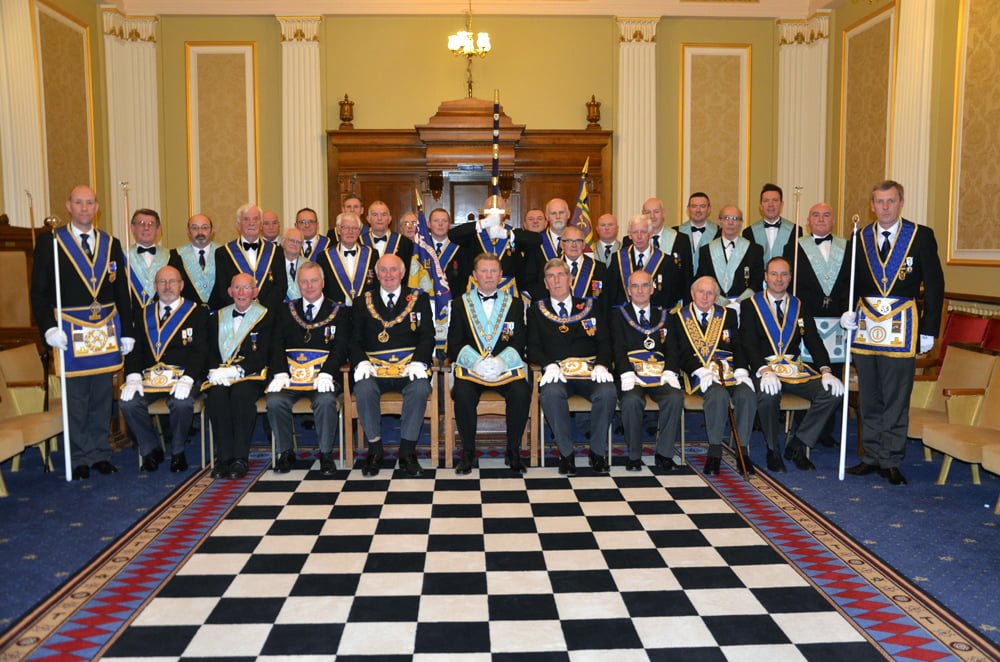 To celebrate not one but four special events on the evening of the 11th November, Civic lodge who meet at Burdon Road, Sunderland, invited the Provincial Grand Master, Norman Eric Heaviside, and a large deputation to attend there celebrations as their guests for the evening. The Provincial Director of Ceremonies Andrew Dixons requested that the Lodge stand to receive Eric and The “Provincial train’’ which included his Deputy John Arthur, two Assistants Craig Steele and Stephen Walker.  Eric and the team were enthusiastically welcomed by Terry Richardson Master in his second term of Office. Terry then invited Eric to take the chair and after the appropriate salutations he vacated the chair to allow the lodge to continue the business of the evening.

A packed lodge room came to order in with a minutes silence for those who had lost their lives in military conflict ,after which the Assistant Provincial Chaplin rose to dedicate a pair of new Deacons  Wands generously donated by Ken Stobart  on this most special occasion. He began by thanking Ken , before explaining their importance in our ceremony and their meaning. After a short prayer George then called the current Deacons, David Purvis and Anthony Scranton  to the pedestal to collect their new wands. The Master then thanked George for the dedication.

The next item on the agenda was to deliver a history of the last twenty five years of the lodge, researched and collated by lodge member Paul Marshall. The orator for the evening  Richard Davison, who went on to explain that inevitably over the last 25 years there have been many notable brethren who have contributed to make Civic Lodge the successful lodge it is today.

If success is linked to the number of brothers attending a meeting, then the jewel in Civic lodge’s crown is annual St. George’s Night meeting, when tickets are always in short supply, we think back to the wonderful voices of Eddie Grattan and George Angel, as well as the relationship they both had with everybody’s favourite old soldier, “Ted Hold”. Fantastic performances, likened to Last Night of the Proms, with all the pomp and circumstance. .

It is often said that behind every good man is a good woman. This has been illustrated by the “Civic Ladies” group, who not only supported their husbands in Freemasonry but also organised their own events to generate money for charity. They must be thanked and praised for the large amounts they have raised throughout the years on behalf of the Province of Durham. The last 25 years have seen Civic Lodge change with the times but it has always been a happy and fruitful balance between the modern and traditional. Terry then thanked Richard for delivering this so well, at such short notice.

Next on the agenda was to be 50year, long service certificate presentation to Ken Stobart. Craig Steele started by arranging two chairs set in front of the pedestal, then both Ken and Craig started their ‘Parkinson’ style discussion. We learned that Ken was initiated fifty years to this day in 1966 and when asked by Craig of any recollections, Ken replied ‘’indeed many’’ being that as he was initiated on Civics’ 25th anniversary, ‘’every time the lodge has a marked event, then so do I’’. Craig went on to acknowledge Kens commitment to Freemasonry , becoming Master in 1981 as well as serving on both the GP committee and as a Benevolent representitive. For the lodges fifty year celebration, Ken donated a new Bible back in 1991 and for this, their 75th, as we had just witnessed, a brand new set of Deacons wands. On receiving the the certificate, Ken then thanked Craig for the experience and Eric for bringing a Deputation along this evening but mostly he would like to acknowledge the support of his wife and that of the brethren of Civic for him being able to achieve this milestone, of which prompted a round of rapturous applause from the Lodge.

After the chairs had been replaced and everyone had retook their places, Terry rose to make a surprise presentation to Eric of £5841 to the 2021 Festival  which equated to their lodge number. Eric thanked the lodge for this magnificent sum stating that he would  say more at the festive board.

After closing the lodge and Photographs, over ninety guests then retired to the enjoy the festive board where they were greeted with canapés followed beef wellington, a trio of deserts then capped off with a cheeseboard.

In responding to the toast Eric thanked the assembled brethren for the warmth of the welcome and also the Provincial Officers who accompanied him on the deputation. Further toasts followed with responses by Charlie Walton, Peter Thomas, Ken Stobart and finally Richard Davison with even more work to do, replying on behalf of the visitors.

Having already surprised Eric, earlier in the evening, by giving such a large donation in the Lodge, Terry now offered him a second cheque, however, only on the pre condition that John Thompson Festival Director could return the ‘cutlery’ he had “borrowed” on his previous visit to Burdon road. Eric, smiling, said that he remembered the occasion well and he would ring John and make sure that he responds to Terry’s request.  It was now Eric’s turn for some surprises, firstly he requested that Bill Finke  the  lodges Charity Steward come forward on which he presented him with a bronze Festival Pin emphasising he should wear it with pride.

Then Eric turned his attention to the Master to promote him to the Rank of Past Provincial Junior Grand Warden, knowing that Terry would be unable to attend the forthcoming Promotions meeting to be held a Rainton Meadows Arena, Eric decided that this evening would not be complete by not undertaking doing so now……which was met with rapturous applause.

The evening was closed suitably then by Eric being given a bunch of flowers for his good lady as a mark of thanks for allowing him to stay out late….again.