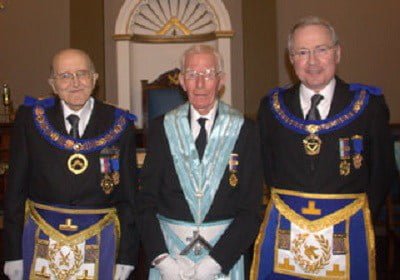 What a memorable evening it was for the members of  Claremount Lodge at our October 2016 meeting when we celebrated the Sixtieth Anniversary of WBro Bill Mackenzie’s initiation into Cornfield Lodge No.715 (Irish Constitution), Belfast.

As well as having the Area One APGM WBro Paul Massie attending, we also had Very WBro Alan Glazier Deputy PGM in our presence, together a number of the members of the Cheshire Provincial Team

When he represented the PGM at the Installation of WBro Bill into the Chair of KS in 2013, Very WBro Alan Glazier made a commitment to attend Bill’s 60th. Anniversary.  On that earlier occasion the Deputy PGM presented WBro Bill with his 50+ years Masonic anniversary certificate.  Thanks must go to WBro Stuart Jones, the Deputy Provincial DC, who patiently guided our DC and ADC and the acting Lodge members through the floor work for this special occasion.

In the meeting the APGM, WBro Paul Massie, gave a brief synopsis of Bill’s maritime career and personal life, as well as Bill’s sixty years career in Freemasonry.  Bill included a short reminisce of the time he caused a stevedores’ strike in Darwin in Australia while his ship was unloading cargo.

Together with his Sixtieth Anniversary Provincial Certificate presented by the Deputy Provincial Grand Master, the Lodge gave him a whisky decanter and two tumblers engraved with Masonic Square and Compasses, as well as a set of Masonic cufflinks and a Lodge Certificate for his Sixty Years.  Thank you Honorary Member WBro John Maxwell for your efforts on this certificate.  Later at the Festive Board our worthy DC Hugh O’Neil, presented Bill with a Masonic Sixty Year lapel pin.

We all now look forward to the celebrations in 2026 and Bill’s Seventieth Anniversary.  We are sure that our Dep.PGM has already made a note in his diary!