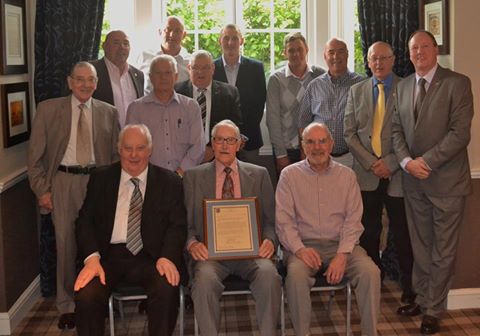 W. Bro Donald Rouse, who was initiated into the John Evelyn Lodge No. 5518 on 22nd January 1966, was presented with his 50 Year certificate at a surprise luncheon held in his honour. Bro. Rouse, who lives in Hearn Bay in Kent, has not been able to attend recent lodge meetings in London, so when the subject of how to present him with his certificate was discussed, the answer was simple “As Donald can’t come to the lodge the lodge will go to Donald”.

Believing he was going out for Sunday Lunch with just one lodge member and their wives, Bro. Rouse arrived at the Marine Hotel, Tankerton on 22nd May 2016 to find a further eleven lodge members together with their wives and girlfriends in attendance. The luncheon was held in a private room at the hotel where Bro. Rouse was presented with his certificate by the current Worshipful Master, W. Bro Jason O’Brien. The Lodge Secretary, W. Bro John Blackman, read a history of Bro. Rouse’s Masonic career and then gave a review of the significant events of 1966.

Bro. Rouse was then presented with a suitably engraved decanter and glasses and his wife, Sheila, received a bouquet of flowers. Bro. Rouse thanked everyone for attending and said it had been an amazing day and a complete surprise. He also thanked his wife for supporting him over these last 50 years.