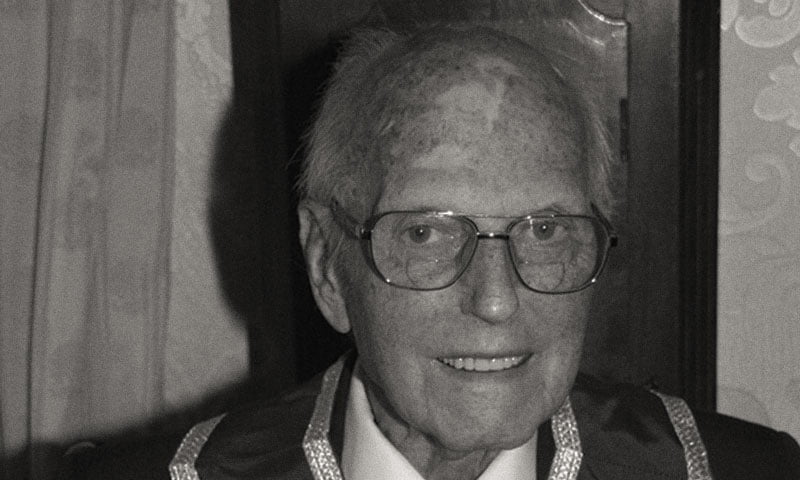 W Bro Richard James Richardson was born on 23 January 1922 in Doncaster. At that time, the nation was still rebuilding its strength after the carnage of the First World War and the principles of commitment to one’s family, friends and colleagues which were very much to the fore, created an environment which shaped the attitude of many young men. What emerged were men who recognised the value of service to others and it is therefore probably not surprising that Dick Richardson became the man we know.

After school, W Bro Dick joined an engineering company manufacturing machinery for the munitions industry. In 1946 came a change of direction on the employment front when he joined Nottinghamshire Constabulary as part of the county force.

There followed a long, successful and highly respected career with the Police. At the time of his retirement W Bro Dick held the very senior rank of Chief Superintendent and was Divisional Commander for the Worksop area.

I believe it would be totally accurate to describe Dick as being very proud of his family and also of what he achieved in his chosen career. I am advised by unimpeachable sources that he could also be described as a bon viveur.

In terms of Freemasonry, a 44 year old Mr R J Richardson was Initiated into Pelham Lodge No 939 on Thursday 15 September 1966, the 50th anniversary of that occasion being only some 6 weeks away. He was Installed as Worshipful Master of the Lodge on 16 April 1981 which was the same year he helped to found Ryton Lodge No 8988

W Bro Dick was also a Founder of North Notts Masters’ Lodge No 9525 which was Consecrated in 1993 and he subsequently served as Master in 1995. In 2000, he helped to Consecrate the Stewart Hill Lodge No 9706 as a Founder and was installed as Worshipful Master of the Lodge at its first Installation Meeting in September

Turning to the Province, W Bro Richardson’s first appointment was that of Provincial Assistant Grand Director of Ceremonies, an acting position, on 1 April 1987. Several promotions followed including being promoted to act as the Province’s Junior Grand Warden in April 1991 – only 4 years after his first appointment which says much about how W Bro Dick was viewed by the leadership of the Province.

It was a surprise to no-one when Grand Rank followed and on 28 April 1993, W Bro Dick received the rank of Past Assistant Grand Director of Ceremonies. Some 10 years later, he was promoted to the rank of Past Junior Grand Deacon – a rank currently held by only 14 members of the Province.

W Bro Dick has also had a long career as a Royal Arch Mason having been Exalted on 27 April 1977. He was Installed as Most Excellent Zerubbabel of Dukeries Chapter No 6289 on 22 May 1989. He holds the Province’s most senior rank outside the leadership, that of Past Provincial Scribe Nehemiah.

In the almost 30 years I have been visiting Worksop Masonic Hall, one of the constants has been W Bro Dick Richardson. Every masonic centre has its heartbeat and the man we are honouring today has been very much part of that soul. If any proof was needed of the level of respect the brethren have for W Bro Dick, then it is shown in the number of Honorary memberships which have been conferred on him by Worksop based lodges and they total 5.

It is both my privilege and pleasure to be able to present this Certificate which marks 50 years of continuous membership of the Craft on behalf of Pelham Lodge No 939 and a very grateful Province of Nottinghamshire to Worshipful Brother Richard James Richardson, Past Junior Grand Deacon.