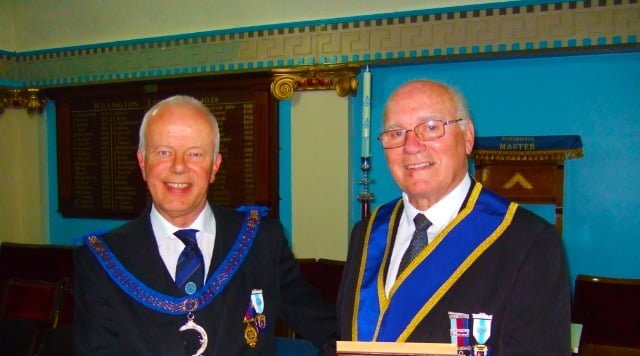 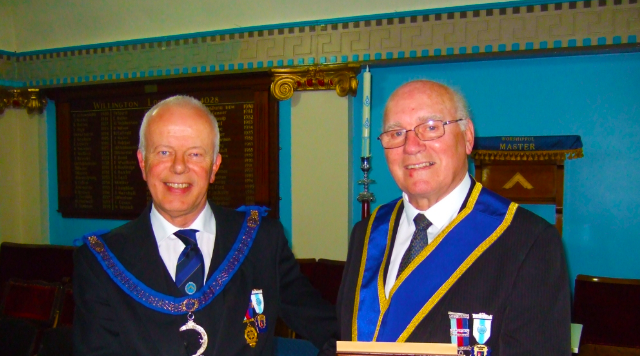 William Geoffrey Dunn is no stranger to recognition of his various achievements during his life. Each have been rightly awarded to him for his contributions and commitments both in professional or voluntary capacity. The same can be said of his commitment and service to Freemasonry. He was initiated into Willington Lodge at the age of 34yrs on the 8th of June 1966 becoming Worshipful Master in 1980. In the Royal Arch, he was exalted into Clavering Chapter becoming First Principal in 1985 and became a Founder of Elevation Chapter where for many years he was Scribe Ezra and is currently their Director of Ceremonies.

Major Provincial honours of Acting Provincial Grand Sword Bearer were awarded to Geoff in 1989 and promoted to Past Provincial Junior Grand Warden in 1996. In the Royal Arch, he received various Provincial Honours culminating in Past Provincial Scribe Nehemiah in 2002 and a appointment to Supreme Grand Chapter as Past Grand Standard Bearer in 2008.

Geoff is well known within the Province as a prolific visitor to other Lodges and well known for many interesting talks. To state that he is a popular and well respected brother would be an understatement. The evidence, if required was the attendance of both the members and visitors to Willington Lodge at their last regular meeting. The visitors which included a host of distinguished brethren led by the Assistant Provincial Grand Master, David Sanders Hay who was there to Present a 50-year Certificate to Geoff from the Provincial Grand Master. They totalled in excess of one hundred brethren taking the lodge to its capacity.

Before making the presentation David Hay gave an overview and antecedents of Geoff’s life achievements. He stated that Geoff was born on the 29th March 1932 at Howden-le-Wear and had two sisters and three brothers. He was educated at the village school and later at Durham Commercial College.

In 1948, his first job was as a gardener but that only lasted a few weeks before he became a salesperson for SS Lingford at Bishop Auckland. In 1950 did National service in the RAF, serving in Singapore and Malaysia as a teleprinter operator.

Completing National Service in 1952 he joined Durham County Constabulary working in various department before becoming a member of Traffic Division as a motorcyclist for some two years and then for fourteen years as a patrol car driver and vehicle examiner.

When local police forces where subjected to Local Government changes in 1974, he was transferred to Northumbria Police and went onto to become Secretary of the Northumbria Branch of the Police Federation for England & Wales. Among his notable achievements was his contribution to ensuring all officers were able to access free medical examination while serving. He received four Commendations for extraordinary service and in 1978 he was awarded the Queen’s 25th Silver Jubilee Anniversary Medal. In 1982 he was awarded the British Empire Medal at Buckingham Palace, from the Queen, for his exceptional work for the Police Service and many local charities.

Geoff and his wife Sheila were married in 1957 and have two sons David and Michael and they have a granddaughter Maya who is the apple of his eye. Geoff and his wife both love golf and play to a high standard and he is the current Chairman of Durham County Golf Veterans Association.

As he made the presentation David admitted that he could have mentioned many other activities but concentrating on the 50 years that he had contributed to Freemasonry it was a delight and privilege to hand the certificate to him.  For his part Geoff thanked the APGM and all the brethren for their attendance on such an important evening to him.

At the festive board 103 brethren dined and during the festivities Geoff was presented with a commemorative watch from the brethren of Willington Lodge. For his part Geoff wished that he could go around the room and give his thanks to every individual who was present.