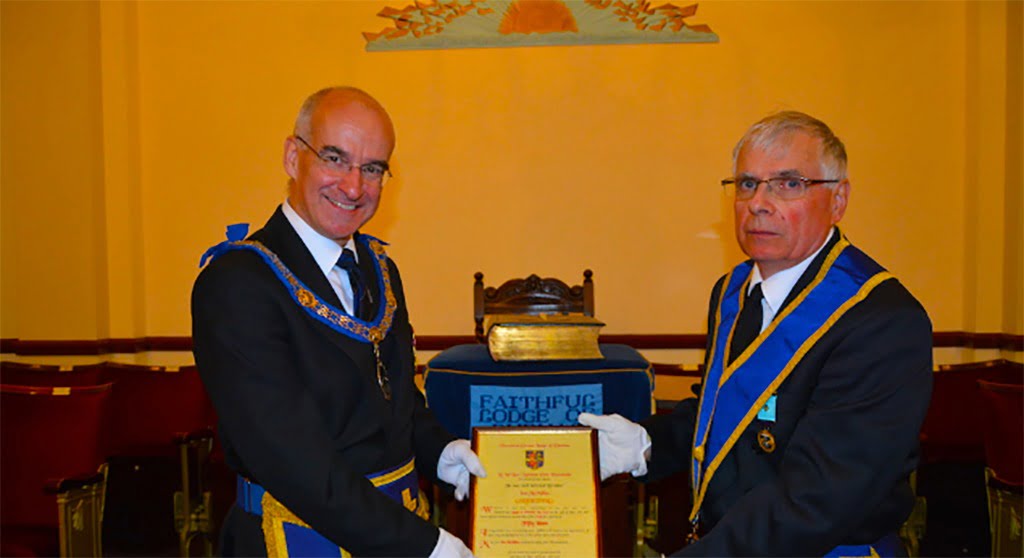 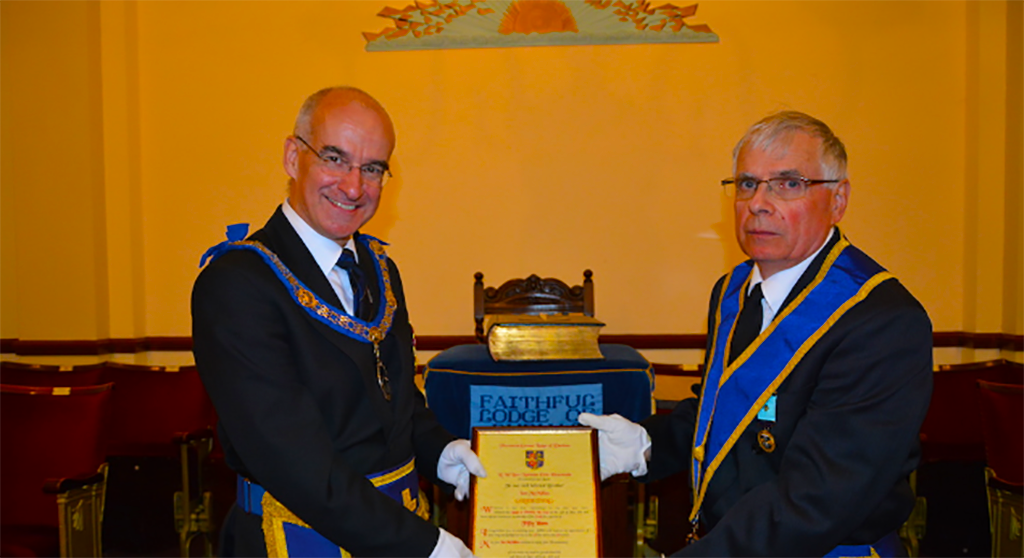 The Assistant Provincial Grand Master, Simon Craig Steele, accompanied by his Director of Ceremonies, Jeff Awdas, on his last night in the role as DC, attended the Faithful Lodge of Durham, at their last meeting before the summer recess, at the Masonic Hall, Birtley on Monday 20th June.

This was a first time visit for Craig to the Faithful Lodge of Durham and, on this fine summer evening, he had the pleasure of presenting Ian McMillan, a founding member of the Lodge, with a certificate for 50-years continuous service to Freemasonry.

After a fine demonstration of a Second Degree ceremony, Craig presented Ian with his certificate and talked of the changes he had witnessed in Masonry, over his 50 years in Freemasonry.

Ian was initiated into The Lodge of Fidelity on 24th May 1966.  He became the Lodge’s Master in 1981 and, for the following 16 years, he held the office of Secretary.  He was a Founder member of the Faithful Lodge of Durham, at the Consecration on 29th October 1983.

After a lifetime working in local government he took early retirement in 1997 and, following a lifelong interest in family history, he undertook a two year course at Newcastle University to gain a certificate in Family History.  He then embarked on a new career as a genealogist doing research for clients and lecturing in Adult Education.  He also volunteered at St. Oswald’s Hospice, the National Trust and Northumberland Records Office.

In 2008 Ian’s life had to take on a different direction on medical grounds and he now spends time watching Durham C.C.C. and assisting with the Eucharist at St. Aidan’s, his local parish church.

Ian has been married to Margaret for 45 years; they have a foster son, James, who lives in Glasgow with his wife and four sons.

Ian humbly and graciously accepted the certificate and thanked Craig and the brethren present, for this special award and for taking time out for him.

‘Faithful Durham’ – refers to faithful and determined service of The Durham Light Infantry, celebrated as one of the most distinguished regiments in the British Army:  on this celebration of Ian’s 50 years in Masonry he has certainly proved himself “Faithful to Durham”