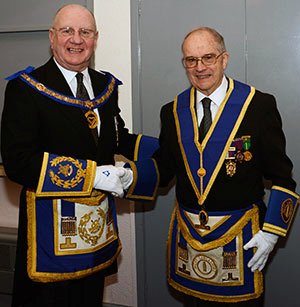 In a packed Silverdale Masonic Hall, Anthony Woof Jackson (Tony) celebrated 50 golden years in Masonry. Tony was joined by so many distinguished guests it was an achievement to get everyone seated in the lodge room. A most welcome but surprising addition to the guest list was the Provincial Grand Master Tony Harrison.

The master of Silverdale Lodge No 6926 Stuart Thompson welcomed Tony Harrison into the lodge and offered Tony the gavel which he politely declined. The gavel was then taken up by the principal guest David Grainger, who then asked for Tony Jackson to be placed before him, thus setting the scene for a very fascinating and enlightening reflection on Tony’s domestic, professional and Masonic life.

Tony was born in 1936 and David began his address by putting in context what other memorable events had occurred in the year of Tony’s birth. 1936 was a remarkable year in that the country had three serving monarchs in the one year; George V died in January and he was succeeded by Edward XIII, who then abdicated in December and was succeeded by George VI. The Grand Master’s sister, Princess Alexandra of Kent was also born in that year, whilst the largest open air swimming pool in Europe opened in Morecambe. 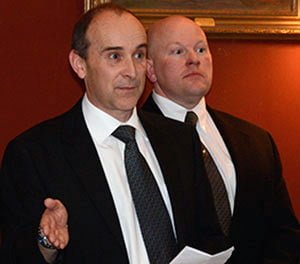 Tony was born in Lancaster and attended in turn Christchurch Primary School, Bowerham Primary School and Lancaster Royal Grammar School. At the age of 16 Tony took the opportunity of leaving school and joined the family firm of Thompson and Jackson; Joiners and Building Contractors based in Lancaster. Tony’s first job on joining the firm was as a trainee quantity surveyor, but he eventually progressed to become Managing Director. Tony is a Fellow of the Chartered Institute of Building and has also served on the Council of the National Federation of Building Trade Employers, becoming president of the North West region in 1979, a member of the City and Guilds National Advisory Committee for building, and also the representative for the Confederation of British Industry on the European Centre for Development and Training.

In 1957 Tony was called up for National Service and served with the Kings Own Border regiment in the orderly room. After training Tony was transferred to Berlin to work in the Russian zone and during this time was promoted to the rank of Lance Corporal. On finishing his National Service Tony resumed work with Thompson and Jackson and continued to work in the company until he retired. In 1963 Tony joined the Army Cadet Corps, 5th Cadet Battalion Kings Own, as a training officer and served in this post for nine years, reaching the rank of acting Captain, second in command of the battalion. As well as serving his country through his work and the army, Tony has also served his community by becoming a Justice of the Peace and was appointed as a Magistrate in 1980, becoming chairman of the bench on a number of occasions. In 1988 Tony was awarded the MBE for services to training in the building industry and also in the Army and received his award from Her Majesty the Queen at Buckingham Palace. 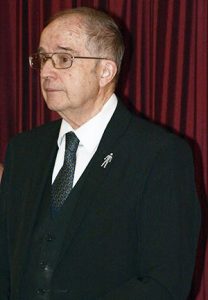 Tony expresses thanks to all his guests.

It was during Tony’s time in the Army that he met his future wife Joan. After finishing his National Service, Tony married Joan in 1959, and they initially lived in Torrisholme, before eventually moving to their present home at Bolton-le-Sands. They have four children, Pamela, Ann, David and Elizabeth. They have also been blessed with grandchildren and great grandchildren. His son David and his son in law Darren, are also members of Silverdale Lodge. At this point David Grainger asked the lodge secretary to read an extract from the minutes detailing Tony’s initiation into Silverdale Lodge in 1966, at which were present Tony’s father and grandfather.

Tony was installed in the master’s chair in 1980. Provincial appointments followed in due course with the culmination of his appointment to the rank of PPrJGW in 2006. In the province of Cumberland and Westmoreland, Tony holds the rank PPrGReg. Tony is also in many other degrees within Masonry and as David succinctly expressed: “Tony’s life has been not so much a Masonic journey, more like a full blown expedition through the many degrees in Freemasonry.” David then asked the group chairman Jim Wilson to read the commemorative certificate which the Provincial Grand Master Tony Harrison had caused to be issued, but in a change from the normal procedure David requested that the PrGM present the certificate to Tony himself. Tony Harrison congratulated Tony and wished him the health to enjoy many more years in Freemasonry. On receiving his certificate Tony Jackson replied: “It is a great pleasure to be here this evening and to have so many friends from other degrees in attendance”. In conclusion he remarked that it had been ‘a very happy journey’.

The festive board which followed was held at Silverdale Golf Club and the brethren present were treated to an excellent meal, fitting such a glorious occasion. The toast to Tony’s health was proposed by his son David who paid a very personal tribute to him. In response Tony remarked that it had been an ‘absolutely wonderful afternoon and evening’ and had been ‘one of the most memorable days of his 75 years’.

The raffle at the festive board raised a wonderful sum of £362 towards worthy causes.

Tony together with a glittering array of grand and acting Provincial grand officers.