The Lodge of St. Theodore No. 8536 hosted a very successful and enjoyable 2021 Festival Awards Presentation on 11th April 2016 in Port Talbot.

The Festival Vice-President, VW.Bro. Roy Woodward DPGM, opened the event by thanking the Worshipful Master W.Bro. Jason Heatman and the members of the Lodge for their generosity in hosting the event. He also thanked all the Brethren for attending and giving their support. The Temple was full to capacity which demonstrated the depth of feeling for the success of the Festival.

He outlined the challenge ahead, to raise £5million pounds in aid of the RMBI, and referred to the “Jewel in the Crown” at Porthcawl, The Albert Edward Prince of Wales Court. The outstanding work that the Court and all other Masonic Homes carry out for Masons, their families, their relatives and members of the public. He stressed that, with the support of all the membership of the South Wales Province the target is very realistic and achievable. The foundation for success of the Festival is covenants; and he urged every member to support the Festival by signing up to regular giving by covenant. The sooner a member commits to covenant, then starting now a donation as little as £2 per week until 2021, will make the success of the Festival a reality. The longer we leave it, the less interest is earned, and a larger donation will be required. The message is clear please sign up now!

The evening progressed with the presentation of Festival Jewels and the Bronze and Silver Awards by the Festival Vice-President who congratulated and thanked the recipients of the Jewels and Awards for their support to the Festival appeal.

Festival Jewels, for those Brethren who have donated or have made a commitment to donate at least £500 to the Festival appeal, were presented by the Festival Vice-President to 20 Brethren of the Lodge of St. Theodore.

Silver Awards, for a Lodges that has made or pledged at least £800 per member to the Festival appeal, were presented to the following Lodges:
Dinas Llandaff No.8512 and Proscenium No.9059.

The Festival Chairman closed the presentation by announcing that Beaufort Lodge No.3834 and Proscenium Lodge No.9059 will receive the Gold Award at the Provincial Grand Lodge meeting on Monday 27th June. He thanked the Worshipful Master W.Bro. Jason Heatman, Bro. Secretary, W.Bro. Neil Dummer and the Brethren of the Lodge of St. Theodore for hosting the meeting and for all the work and support performed behind the scenes in making the evening a success and most enjoyable. He also thanked the members of the Festival Committee and Area Chairs for their help and support.

At the close of the meeting the Brethren were treated to a veritable feast at the festive board, where old and new acquaintances socialised.

On behalf of the Lodge the Worshipful Master presented a cheque in aid of the Festival to the Festival Chairman, who very gratefully received it and would ensure it would be faithfully applied. 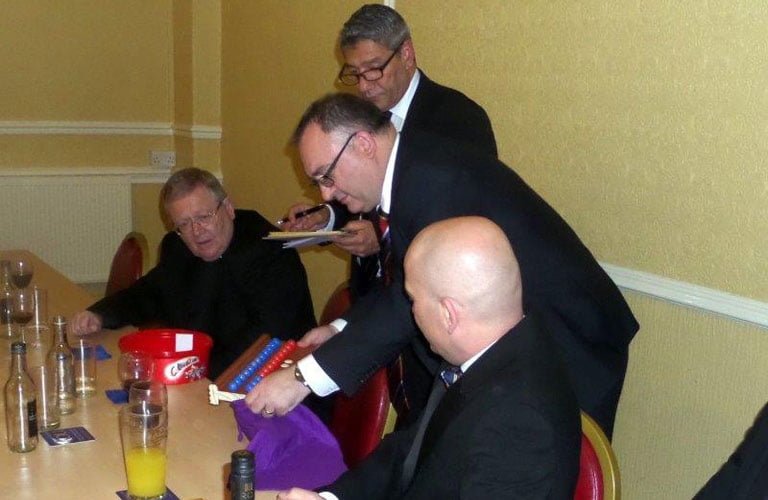 The evening’s festivities were drawn to a close with a short presentation of the Provincial Lottery by W.Bro. Mahmood Poptani followed by the March draw. The numbers drawn out were: 1, 5, 17 and 20.

The Brethren made their journeys home in hearty mood after a most enjoyable evening.