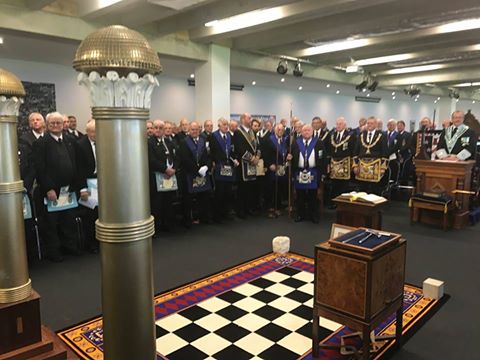 On Saturday 15th July, more than 200 Freemasons from across New Zealand, with their wives, family, and friends entered a specially erected Lodgeroom in Toll Stadium,

Whangarei to celebrate 100 years of service by identical twin brothers, Bruce and Bryan Wiig. Originally from Bluff, both men were initiated into Freemasonry on the 15th July 1967 in Lodge Fortitude No 64. Over the years they have both moved away with Bruce now living in Auckland with wife Carol and Bryan in Whangarei with wife Marie.

Wives, family, and friends joined the men for the remainder of the event in the Lodgeroom. There are 33 degrees or steps that a member of Freemasonry can achieve and as a further mark of respect for the Wiig brothers, three senior members of various higher degrees also attended

Along to enjoy the event were seven other holders of a 50 year service badge, with one due for the presentation of his 70 year bar in September this year. With the two Wiig brothers that is a combined total of 470 Masonic years of caring for our communities in New Zealand in one place on the same day.

Along with the presentation of the lapel badges, personal letters of congratulation, and certificates, the wives, Marie and Carol were presented with flowers and shawls as a way of saying thank you for their support of their husbands over the last 50 years. Following these formalities the men removed their regalia and the temporary Lodgeroom fittings were “packed up”.

After the traditional Masonic toasts and replies a superb meal was served which concluded with the cutting of a very large 50th anniversary cake.

A fantastic conclusion to a shared celebration of Freemasonry in the lives of two great New Zealanders.