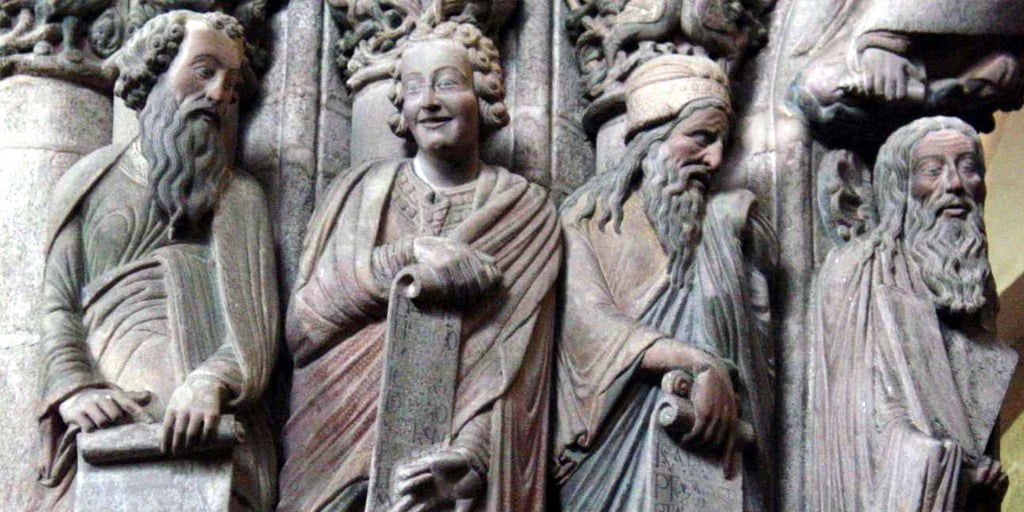 Some thoughts on the history of the Tracing Boards 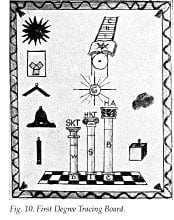 The next step in understanding this story is the evolution of the Ritual. During the Eighteenth Century there was a tremendous growth in Ritual. How Masonry was practiced (at least, as far as we know) from the beginning of the Grand Lodge in 1717 to the end of the 18th century is so fundamentally different that it is almost impossible to understand. For example, the first published Book of Constitutions was written by Anderson and published in 1723. The title page of that book states that the Constitution, that is the history of the laws, the charges, the orders, the regulations and the usages were to be read at the admission of new Brethren. This goes on for about another 48 pages, but on page 49 there’s a second section to the book, which is known as the Charges of a Free Mason. The contents of this, which goes on for 30 pages, is to be read at the making of new Brethren or when the Master shall order it. It may be that the early 18th Century people were prepared to read and listen to long, long lectures. They certainly weren’t by the end of the 18th Century. 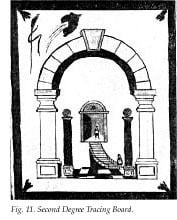 In fact, the first unauthorized Masonic text to be printed in England after the formation of Grand Lodge was Pritchard’s Masonry Dissected of 1730, based almost completely on catechism for its ritual work. This at least involved the participation of the Masons, but whether it included the message that Anderson wanted to get across is up in the air. I won’t spend much time on this as it’s such a totally different topic and there’s been so much written on it..4 Preston is a good place to recommence this analysis because his book, Illustrations of Masonry, published in 1772 was a very popular re-do of the catechism. It wasn’t however, why Preston was so famous. 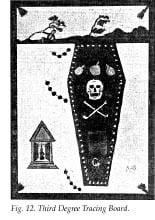 After the success of his 1772 publication Preston developed his own lectures for the Three Degrees and taught each of them separately. These degrees, which became the basis of the Canadian Ritual that we use in this jurisdiction, were never actually published by Preston. He taught them and worked them and in so doing he was part of a somewhat larger crowd of late 18th Century Masonic scholars or philosophers, or possibly even entrepreneurs, who wrote their own versions of the Lectures, such as Finch, Cole and Browne. It is from the latter two that we can get the first specific use of Tracing Boards. Both Cole and Browne devised Tracing Boards as teaching methods for the First, Second and Third Degree lectures. There were some earlier versions than the Cole and Browne version which I have not included here, but they haven’t been attributed and, frankly, I have to use the best reproductions, which come from the Haunch article, not the Dring article. There were some round Boards that were clearly for the First and Second Degrees, and there were also some Floor Cloths about the same time that were for the lectures in the First, Second and Third Degrees. Somewhere along the line, the Degree work got relatively finalized and Lodges got used to seeing not just Floor Cloths for the Lodge itself but also for the First, Second and Third Degree Lodges.

It wasn’t much of a leap to either attach these Floor Cloths to pieces of wood making them Trestle Boards or painting directly onto Tracing Boards. The Boards were not all of uniform size or shape, some were very large (six feet by three feet) and some were painted such that there was the First Degree on one side and the Second Degree on the other side, with a smaller handheld version of the Third Degree Board. Other Boards were painted such that there was a hinge in the middle, therefore allowing on one outside surface the First Degree, and on the other outside surface the Second Degree and, when opened up, the Third Degree in all its glory. These Tracing Boards were to be stood around and looked down on when the lectures were given. The history of Tracing Boards is fairly short, mainly because the cost of having Boards specially made for each Lodge was quite high and they gradually became commercially produced. As far as I know, the only hand-painted Tracing Boards in this Jurisdiction are used by Burrard Lodge No. 50 and Duke of Connaught Lodge No. 64. 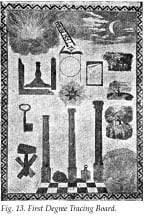 While its clear that there was a tremendous growth of Ritual work towards the end of the 18th Century and certainly after the union, or Lodge of Reconciliation, it’s wrong to assume that the Rituals that were used in England at that time (I’m completely excluding Scotland and Ireland) changed overnight. By chance I ran across a reference that in North Wales Province the delivery of the explanations of the Tracing Boards was first given on March 21, 1872..5
What I propose to do now is go through the Tracing Board artists in chronological order, and use the notes that Haunch uses on the pages that I have reproduced. 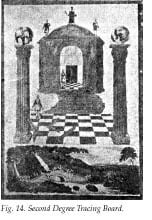 The first of the artists is John Cole, who published Illustrations of Freemasonry in 1801. There are three well known Tracing Boards, I’m informed, of engravings from that publication. We have some copies of that first edition in the Grand Lodge Library but none has or appears to have had any such engravings. So don’t go looking for the original engravings in our Library. (see figs. 7, 8, 9.)

The second artist is John Browne, who wrote Browne’s Masonic Master Key Through the Third Degrees in 1802. The pictures reproduced here are not necessarily by Browne, but are attributed to his designs. John Browne, is of interest for a few reasons. First of all, he was a teacher and the way that he molded the lectures shows his interest in being able to communicate information; .6 Browne is also known because his book is in cypher. In fact, many Masonic books and charts were in cypher, specifically the Ritual books; this was to make sure that non-Masons didn’t understand the Ritual but, of course, Masons had to buy books that had the key for the cypher, otherwise they couldn’t understand it. In Browne’s Master Key, the cypher was as follows: Substitute the vowels a e i o u y with the letters of Browne’s name; precede most words by meaningless capital letters, and then substitute letters including c for e, and then substitute the words Brethren or Masons with exclamation marks and then run the words together indiscriminately and do not use punctuation. (see figs. 10, 11, 12.) 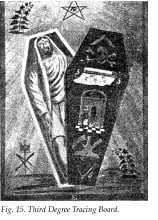 The fourth artist is Josiah Bowring. He’s generally acknowledged to be the best of all as an artist and the pictures I have included come from a different source than the Haunch article because I think they make better copies.(see figs. 16,1718)

What you will notice in the First Degree, hanging from the Jacob’s Ladder right beside Hope–that is, the middle woman on the ladder–is a key. You will also notice a key hanging in the First Degree Tracing Boards of Jacob and Cole. This refers to a catechism which I have chosen to quote from AQC Vol.84 (l971) page 327 because it is so interesting; it also indicates some of the material that was lost, or has gone out of usage, with this reliance on Tracing Board lectures: