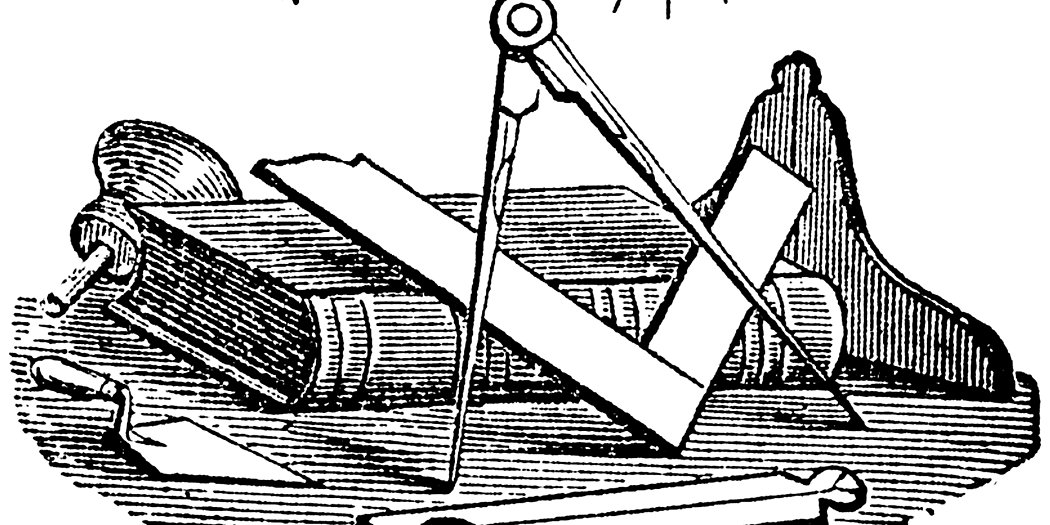 THE Armeria or Royal Collection of Arms now preserved at Turin, was made by Charles Albert, King of Sardinia, who was born on the 2nd October, 1798, and died on tbe 28th of July, I849; having previously abdicated in favour of his son the late Victor Emmanuel, King of Italy. The collection, which is a large one, contains many valuable and rare specimens of both ancient and modern arms, and among them is this sword bearing Masonic ornaments.

The sheath is also decorated, and it, is to be regretted that it has lost the tip or heel. The ornaments on one side of the hilt include the compasses, trowel, ladder, plumb, level and rule; and the square finds a place on the upper metal ornament of the sheath. On the other side much the same symbols occur on the handle, with others on the boss between the quillons on the sheath, on this side is a group composed of the compasses, square, ladder, rule, mallet and plumb, with what is apparently intended for a very large weight attached. There are one or two of the figures on the handle which I cannot easily determine.

The catalogue states that the sword blade is 0,540 long and 0,066 broad, with black mountings, partly wood, partly iron, and also Masonic emblems inlaid of lead and silver both on the hilt, and the ornaments of the black velvet sheath.

An explanation is then added: “Storta” means a weapon with a curved blade, with the edge and rib carried up to the base, whence it starts gradually widening towards the point, which is sometimes cut slantwise, obliquely, something like a scimetar, but not so-large. Bando, Jan., 1552.

It is told of Cantissi, a Tuscan Legislator (II., 296) that he was seen one day in the public square with a “storta” under his cloak, which bore some likeness to the Turkish swords, his adversaries to insult him, nicknamed him “The Knight of the Scimetar.”

This note describing the “storta” has no doubt given rise to the belief that this sword belonged to a terrible chieftain ; and that it itself was of an age corresponding with, or earlier than the edict of 1552.

It seems to me that it is an error to call the sword a “storta,” as that weapon evidently resembled a scimetar, and this one has few of the scimetar’s peculiarities. The shortness of the blade, as well as the huntinghorn which is several times repeated in the ornaments on both the hilt and the sheath, lead me to think that it is really a hunting-sword or dagger.

Masonic swords, that is swords of the eighteenth century bearing Masonic emblems, are far from common. There are daggers of a later date, but these are more for ornament than use; indeed, some have the blades of silver laid over a core of iron.

The Turin sword is not a Masonic sword, but a real weapon made for use by a Mason, and ornamented with Masonic emblems. It is therefore an interesting specimen and so far, I have not met with another example of the kind.

It seems to me from the ornaments, shape, and other peculiarities, to date from about 1750, two hundred years later than the description of the “storta.”

I must not omit to thank those friends to whose kindly interest I owe not only the knowledge, but the means of publishing this interesting Masonic relic. My attention was called to it some years ago by the Baron de Cosson, F.S.A.; Miss Gonino, when at Turin, with some trouble obtained permission for her nephew to take the photographs, and very kindly gave me the negatives, these in the skilled hands of Bro. Walter L. Nash, F.S.A., produced the pictures from which the blocks were made.