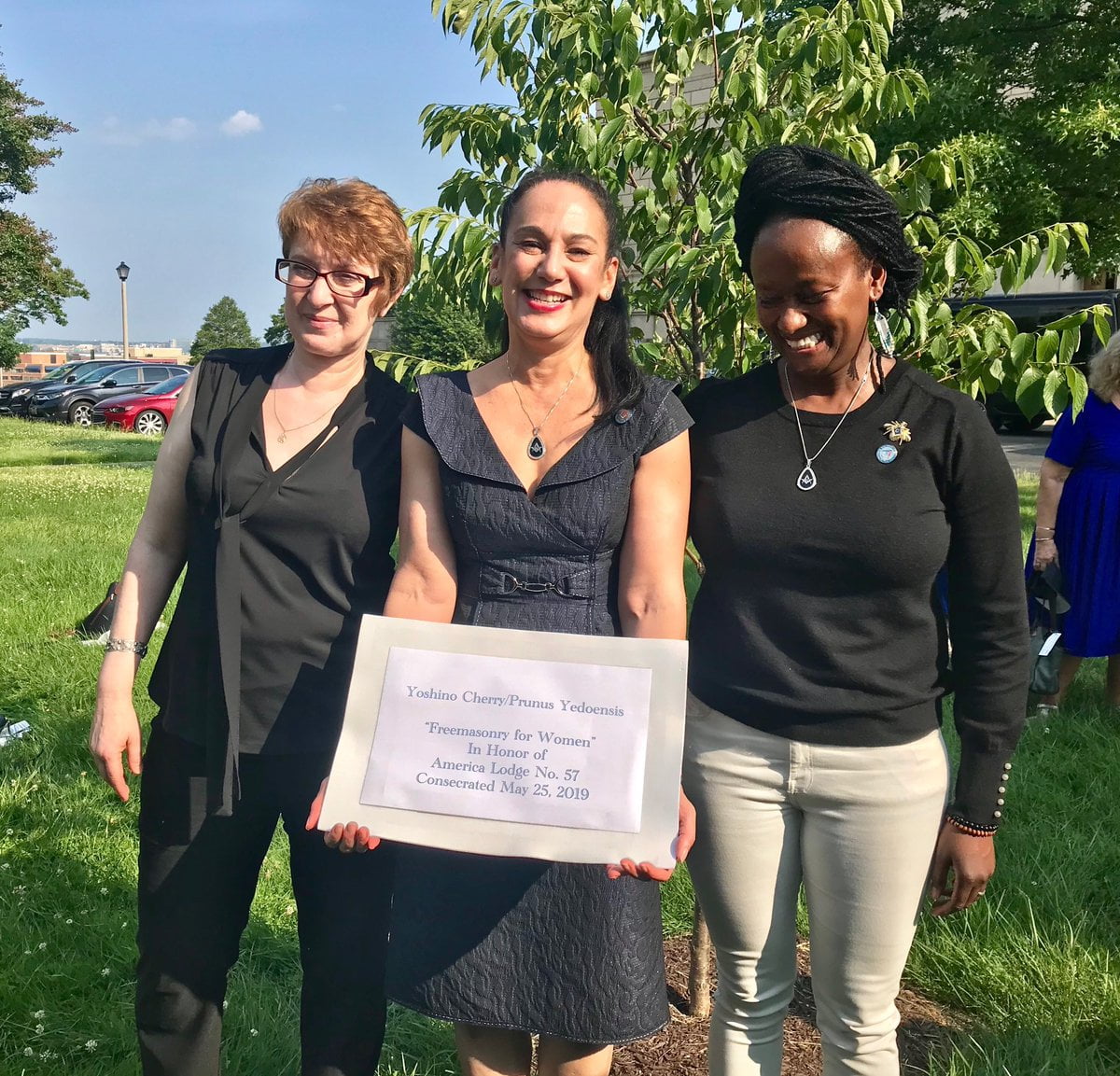 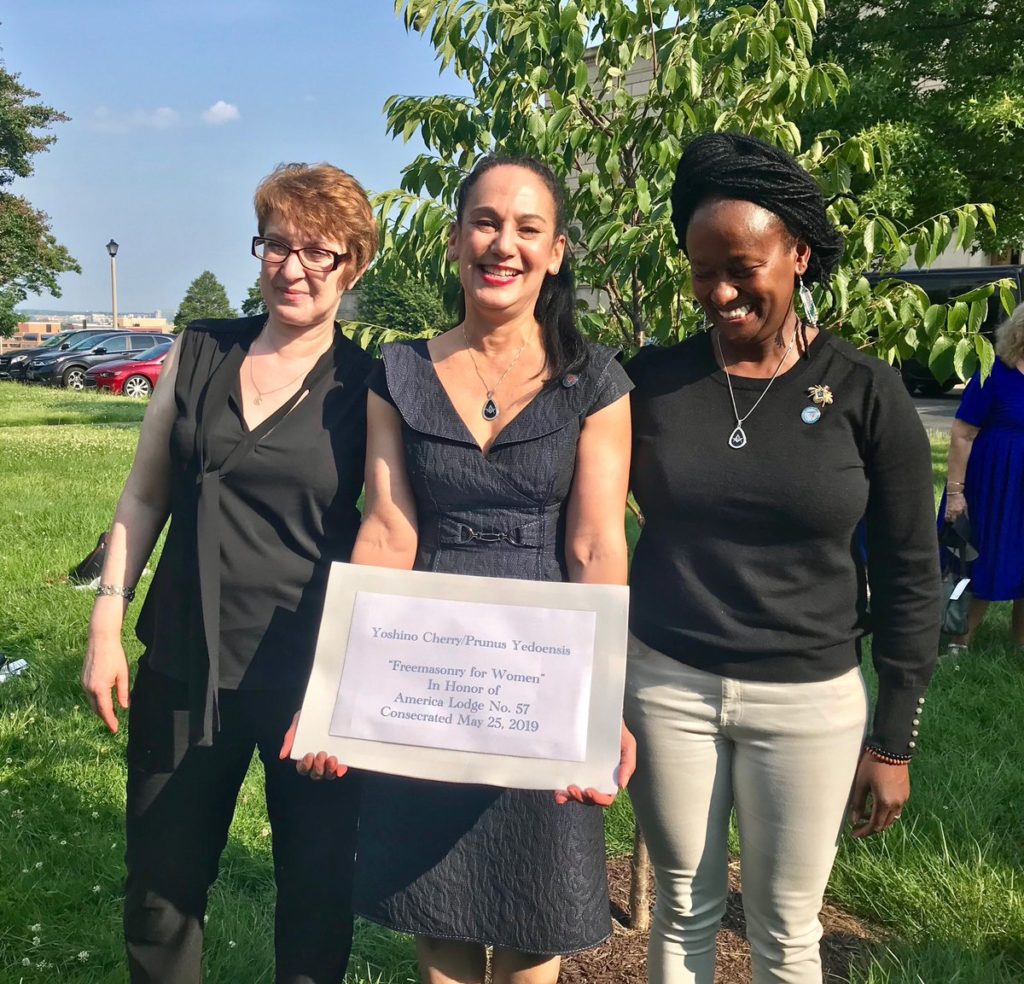 America Lodge No. 57, the first Women’s Regular Masonic Lodge in the United States, was consecrated in Washington, D.C. on Saturday, May 25, 2019, by the Honorable Fraternity of Ancient Freemasons (HFAF) of the United Kingdom. Immediately following the consecration, the officers of the newly created Lodge were installed with Lourdes (“Lou”) P. Elias as the Lodge’s first Worshipful Master.

The Lodge’s consecration and the installation of its officers were conducted in a closed ceremony. However, HFAF gave exclusive access to Audiovisual Media, Inc. to film rehearsed parts of both ceremonies for the purpose of producing a documentary underwritten by the John E. Fetzer Memorial Trust to mark this historic occasion. The late John E. Fetzer, former owner of the Detroit Tigers and a radio pioneer, was a 33rd degree Mason in Michigan.

For centuries, Freemasonry was concealed in secrecy and mystery, but most importantly, it was dominated by men and its age-old traditions remained literally unchanged, especially in the United States … until now.

About 250 years ago, Freemason men like Paul Revere, the Marquis de Lafayette, George Washington, James Madison, and Benjamin Franklin laid the foundation for a new experiment in human governance based on individual liberty, rule of the people and the rule of law. America, the Great Experiment was born, and it fell on each and every generation of citizens of the United States to labor hard mostly peacefully, but at times not so peacefully, to continue building a more inclusive experiment for the purpose of advancing the human condition.

Throughout that period, men in the United States presided over their own lodges, dominating this great experiment of Freemasonry. But on May 25, 2019, the time for change has come for women. At 3:00 PM yesterday, the consecration of America Lodge No. 57 took the experiment to the next level.

Lou Elias, the Worshipful Master of America Lodge No. 57, at the Gala Celebration she described the significance of the event:

“In a few days, on June 4th, America will celebrate the Centenary Anniversary of the passage of the legislation by the United States Congress that became a year later the 19th Amendment of the U.S. Constitution granting women in our country the right to vote. To mark this important anniversary, our British Brethren brought once again to our shores the light of Freemasonry, except that this time around they brought us the light of Regular Women Freemasonry working in the same tradition and practice of the United Grand Lodge of England.

Look at the world around us and see the same old forces of darkness – ignorance, intolerance, and tyranny – rising once again in an attempt to enslave the human mind. The teachings of Freemasonry are needed more than ever to equip our societies with the tools of resistance, but this time around, we need Freemasonry in is fullest force. It is Regular Women Freemasonry that brings that potential to fruition by complementing and augmenting the work of our men Brothers in building better selves, better communities and a better humanity.

As a woman, I am cognizant of the lack of balance that exists in our society and of the dire conditions that plague many societies around the world. Regular Women Freemasonry is here to empower good women who aspire to better themselves first so they can next advance the human condition. Freemasonry, synonymous with Geometry, teaches us symmetry, beauty and balance.

Regular Women Freemasonry brings that balance to our Noble Craft by providing the private space that women need to work on themselves and improve themselves in Masonry within their women-only Lodges, in the same tradition of Regular Men Freemasonry. Then, as the two private streams of Regular Freemasonry produce free men and women builders, Brothers of both genders can work more effectively together in the world and shine the light of Freemasonry Universal throughout our communities. With the full force of Freemasonry deployed, trust me my Brethren, the forces of darkness will be once again defeated.

May the Grand Architect of the Universe bless each and every one of you; may God bless our country as we remember on this Memorial Day weekend those who made the ultimate sacrifice in the cause of Freedom; and May the Light of Freemasonry Universal shine within all of us!”

The Gala Celebration was held at the Almas Shriners Center in Washington, D.C. as an open event that included a traditional Masonic Festive Board and was attended by the Grand Master of Free And Accepted Masons of the District of Columbia along with several former Grand Masters.