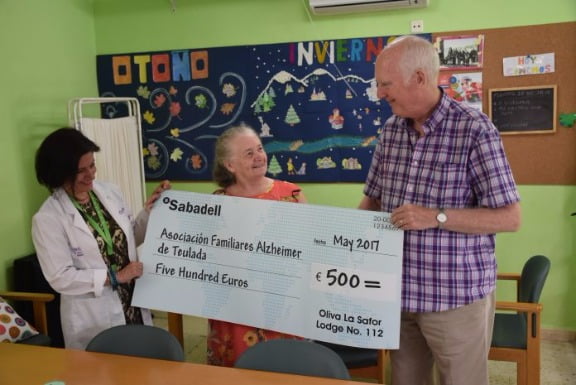 Graham, the Immediate Past Master of the Oliva La Safor Lodge, had made the Association one of his selected charities for his year as Master and during that period the donation was raised by members of the Lodge during various money raising events.

The Association is partly funded by the local council who provide the necessary professional staff which are necessary to obtain the correct operating licences but relies very heavily on charity donations and volunteers. Like many charities there is always a need for goods, services and, above all, money.

This donation will be used to service the Association minibus and buy four new tyres for it. This vehicle being essential as they cover such a large area taking in Javea, Denia, Benitachell, Teulada and Moraira. This puts enormous strain on all the facilities but especially this vehicle which covers so many kilometres collecting and delivering patients.

We were met by Carmen Mudaira, the psychologist who is a director of the Association and Sylvia Tatnell the President of the Association and who is also the former deputy Mayor of Teulada. We were given a very interesting insight into their work and a short tour showing us some of the facilities available. There is also a nurse and a social worker to look after the wellbeing of all the patients.

While there Graham was greatly impressed by the love and care with which the patients are treated. Much emphasis is placed on keeping the patients as active as they can be and many methods are used to keep them as mentally active as possible. Unlike some other centres the patients are not simply given a TV to watch but are given as many different stimuli as possible.

There is a TV but this is used mainly for games and puzzles which help to stave off some of the worst effects of this terrible disease for as long as possible. The centre is open from 8am until 8pm and food is provided for all. It is open to all nationalities and currently has a mix of English, Spanish and Dutch people.