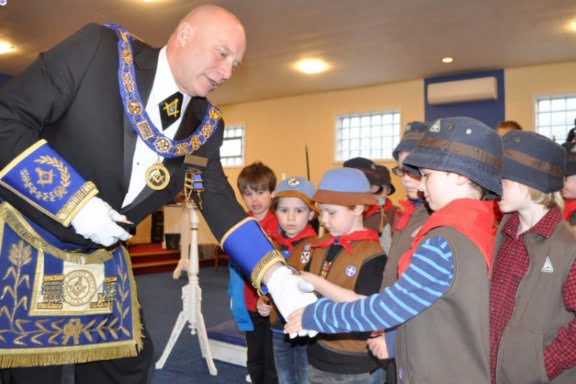 A beautiful friendship: how a group of Freemasons in Wolfville are giving back to local Beavers

When the Worshipful Master of St. George’s Lodge No. 20 Gary Smith asked his fellow Freemasons who was involved in the Boy Scout movement as a lad, every man stood up.

It’s no wonder the Freemasons are supportive of the First Wolfville Beavers. Leader Floyd Priddle says the troupe has been provided with a meeting space at the Masonic lodge for three years at no charge.

Not only that, Priddle says, “individual masons have purchased and donated supplies and badges, and members are very positive and fatherly toward the boys.”

Recently, the Freemasons presented the Beavers with a custom badge that Priddle says, “is a recognition of, and tribute to the Wolfville Freemasons’ support, and mentoring of First Wolfville Beavers.”

The badge is displayed “on the back of the scouting necker to show the relationship with a supporting organization,” he explained. “The Wolfville Lions Club, for instance, is a big donor to First Wolfville Cubs.”

As a parent, as well as a leader and a Freemason, Priddle said the recent badge presentation was also a celebration of the resurrection of the First Wolfville Beavers.

The colony “was around for many years but, five years ago, stopped operating for two seasons due to a shortage of leaders. We restarted three years ago with six beavers and four new leaders. This year, we have 20,” Priddle said proudly.

Each spring, the Beavers and their parents like to visit a meeting of the Freemasons to say thank-you for the support, he added.