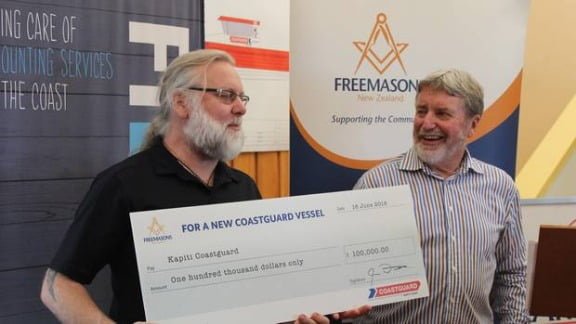 Freemasons New Zealand has given Coastguard Kapiti Coast $100,000 towards the purchase of a new rescue boat.

At a cheque presentation ceremony at the Kapiti Boating Club on Saturday, Coastguard Kapiti Coast president Rob Berry thanked the Freemasons, saying the donation was a “significant landmark” in the fundraising campaign.

The donation, and others from different organisations, would allow the Coastguard unit to continue its volunteer work of saving lives at sea.

“These donations aren’t just for us, they’re for the entire local community.”

The new boat, costing just under $400,000 including tractor and trailer, would replace a 27-year-old boat that had spent her whole life as a Coastguard rescue vessel.

“She’s served us very well over the years taking part in several thousand rescue searches and even more hours of training exercises.

“As we go out in all types of weather, and we build a strong affection for our boats, it will be sad to see her go, but the time is right for a new replacement rescue vessel.

“The new boat will be a huge leap in terms of layout, equipment and electronics as well as being faster, more economical and safer to operate.

“We anticipate this new vessel will serve us and the wider community for another 20 years or more.”

Freemasons Divisional Grand Master Jim Watt said the community focused organisation had been keen to help after hearing about the project from Coastguard member Pete Woodward, who is also a Freemason.

The donation, raised over four years, was from all the lodges in the Wellington region and had been met dollar for dollar by the Freemasons Charity.

“None of the funds of the $100,000 cheque have come from the public, nothing has been done through public fundraising, everything has come from our own organisation.

“We hope the boat gives long service to you.”

Coastguard central regional manager Lesley Slieker said the donation had been “inspirational to the unit” and a new boat would give it “a whole new era”.

“Everyone who has given to this new boat has a part to play in our future.

“You have invested in us for which we’re thankful.

“But I know someone who is going to be more thankful than we are and that’s the boatie, or family, who are stuck out there [at sea] one night in the future, when it’s cold, wet, rough and they think no one is coming, and then they see a rescue vessel.

“They’re going to be more thankful than any of us can ever imagine.”

Robyn Putt, from Heartland Bank, which has a strong association with Freemasons, praised the Coastguard.

“The work they do is truly lifesaving.”

Construction of the new boat is expected to start in about two weeks time with completion late September.

Some of the other key donations have come from Coastlands Shoppingtown, Southward Car Museum, Finman Services, Rachael Steinmetz.