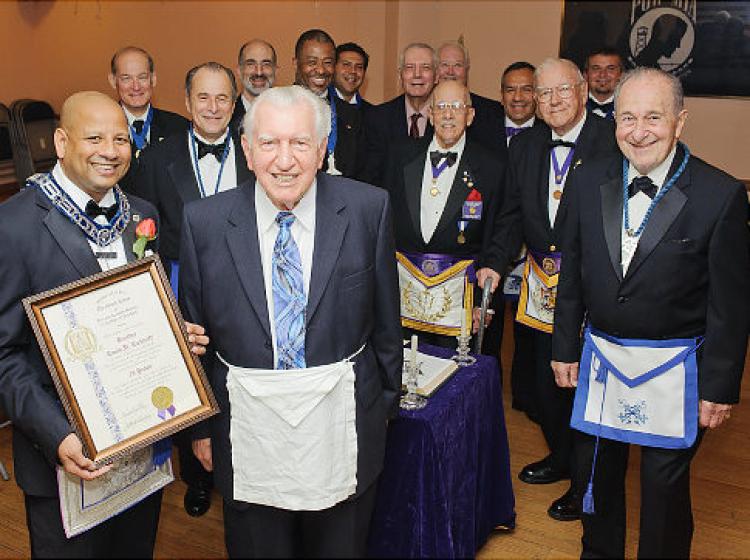 Louis Eickhoff, 92, celebrated 70 years as a Freemason in Queens.

Hundreds of Freemasons jammed into a Queens lodge in 1941 during Louis Eickhoff‘s initiation into one of the world’s oldest fraternal groups.

During the ceremony, a Masonic leader asked, “In whom do you put your trust?”

He soon realized his mistake.

Seventy years later, the 92-year-old Eickhoff – who has lived in Georgia for five decades – returned to Queens last week to mark a rare anniversary.

It’s unusual for a Freemason to reach his 70th year in the group since members must be 21 and often don’t join until they get married.

At a time when the group is struggling to recruit members and hold onto their once-ubiquitous lodges, members cited Eickhoff’s longevity as a welcome boost.

Christopher Hodapp, who wrote the 2005 book “Freemasons for Dummies,” said Eickhoff’s endurance appeals to the Freemasons’ predilection for tradition.

“Masons feel a fond connection to that unbroken chain that goes back to the 1700s,” he said. “Events that talk about our heritage helps to connect them to the founding of Freemasonry.”

Eickhoff recalled when the Tadmor Lodge in Ridgewood was 500 members strong. It now has just 60 members and had to sell the lodge, so its members meet at an American Legion hall in Forest Hills.

“It was a tremendous organization in those days,” said Eickhoff, adding he joined for the camaraderie, which was fostered by regular meetings and dances.

Though the ranks of Freemasons are dwindling now, longtime members say they cherish the group.

The Freemasons also treasured the oral history that Eickhoff can provide.

“He represents a living relic of what was Queens in the old days,” said Jim Haddad, a Freemason who invited Eickhoff back to Queens for the honor.

Indeed, Eickhoff, who grew up in Glendale, said he remembers when the area went from dirt streets to cobblestone to asphalt.

“When I was young there was no such thing as trucks, very few automobiles,” Eickhoff said. “Everything was horses and wagons.”