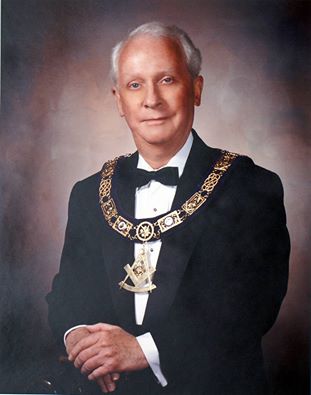 The Reverend Donald W. Monson, a retired priest of the Episcopal Diocese of Arizona passed from this world to be with his Lord on June 5, 2016. Don was born in Alhambra, CA raised in Tucson, served in the US Army and earned a Masters in Divinity in 1965 from General Theological Seminary in New York. Don served on many different councils and committees of the Episcopal Church and worked 30+ years in full time ministry, most in Arizona where he built two Episcopal Churches, St. Michael’s in Coolidge and St. Michaels and All Angels in Phoenix. After retiring from full time ministry in 1995, he continued to serve part time at All Saints Episcopal Church until 2012.

Worshipful Brother Don was extremely active in the Masonic Fraternity in Arizona, serving as Grand Master of Free and Accepted Masons in Arizona 1999/2000, Initiated – October 29, 1959, Passed – November 19, 1959 and Raised – December 10, 1959 at Pima Lodge No. 39 which consolidated with Gila Valley #9. W.B. Monson held many offices in both the Scottish Rite and York Rite as a 33° Mason including, Past Grand High Priest of the Grand Chapter of Royal Arch Masons of Arizona (2000), Past Grand Illustrious Master of the Grand Council of Cryptic Masons of Arizona (1986), Past Grand Commander of the Grand Commandery of Knights Templar of Arizona (1997), Past Grand Governor of the York Rite Sovereign College of Arizona (2004-2006), Past Chief Adept of the Arizona College, Societas Rosicruciana in Civitatibus Foederatis, Past Puissant Sovereign Master of the Red Cross of Constantine (1992). He served on many councils and held major leadership and chair positions in Arizona and Nationally.

Don was known for his quick wit, knowledge of Holy Scripture, and his deep spiritual care for and life of service to his fellow man. He is survived by many cousins and longstanding friends.

In lieu of flowers please send donations to All Saints Episcopal Church (above) or to the Arizona Masonic Library Fund: Checks made out to: “Roskruge-Casey Memorial Library” 14801 N. 15th Ave Phoenix, AZ 85023.