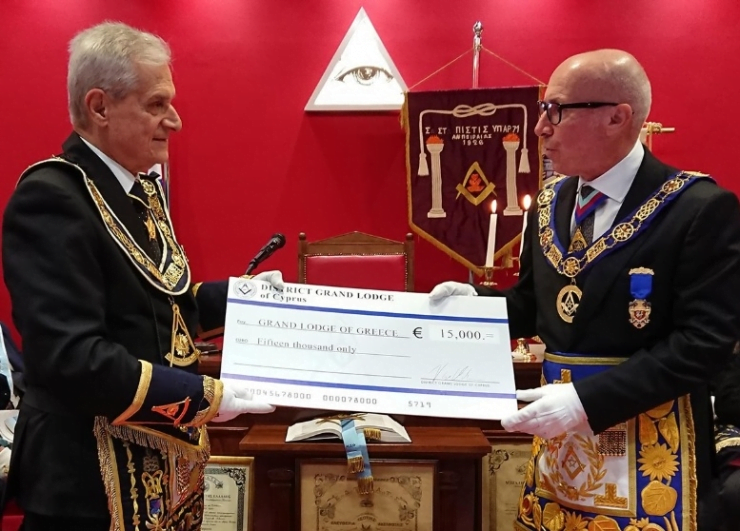 The District Grand Master of Cyprus, Michael Hadjiconstantas, has presented a cheque for €15,000 to the Grand Lodge of Greece to help the people of Mati, who suffered from Greece’s worst wildfire last summer

On arriving to Athens, they were welcomed by the Grand Treasurer Pavlos Sarof before the Grand Master of Greece hosted a luncheon in their honour. In the evening, they then attended a joint meeting of Asklipios Lodge No. 159, Pistis Lodge No. 71 and Vyzantion Lodge No. 60, at the newly erected magnificent Masonic Centre at Kifissia.

The Temple was filled to its capacity with over 180 members in attendance. The original delegation of nine from Cyprus was further enhanced by the arrival of a dozen members of King Tefkros Lodge No. 9786, who reside in Athens, headed by the Master of the Lodge and his Wardens, as well as Past Masters of the Lodge and holders of District Grand Rank.

After the lodge was opened, the Grand Master of Greece took to the Chair and in a most powerful and eloquent address, acknowledged the international senior and prestigious position of the United Grand Lodge of England and the symbolism of the District Grand Lodge of Cyprus’ visit, and recognised this as the beginning of a new chapter in their relations and a strengthening of the fraternal bonds.

Cyprus’s District Grand Master Michael Hadjiconstantas then presented the cheque for €15,000 to Constantinos Politis who thanked the Brethren from Cyprus and assured them that this sum would be faithfully applied to the worthy cause for which it was given. He then announced that the Council of the Grand Lodge of Greece had unanimously decided to proclaim Michael Hadjiconstantas an Honorary Member, in recognition of his efforts to bring about the unity of the members in Cyprus and those in Greece.

Michael Hadjiconstantas was presented with the Certificate of the Grand Lodge of Greece, confirming this honorary membership and a gold coin bearing its insignia.

The meeting then continued with a lecture presented by Greece’s Past Senior Grand Warden, Theodosios Tasios, on the symbolism of the Opening of the Lodge in the First Degree before those present retired from the lodge for the Festive Board held in the Masonic Centre at Kifissia.