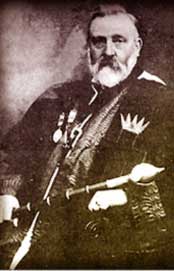 Dr. William Wynn Westcott was born in Leamington, Warwickshire, England on December 17, 1848. Dr. Westcott’s parents died when he was 10 years old and he was adopted by his uncle who, like his father, was a medical doctor. Dr. Westcott attended Kingston Grammar School at Kingston-upon-Thames and graduated from University College, London with a Bachelor in Medicine. He soon went into medical practice with his uncle in Soberest. Dr. Westcott was described by associates of his time as “docile, scholarly, industrious, addicted to regalia and histrionics.” He seems to have had no “girlfriends” in the ordinarily accepted sense but had a great many “platonic” friendships with female initiates.
MAGICAL, MYSTICAL & MASONIC LIFE

In 1875 Dr. William Westcott joined the Masonic Lodge at Crewkerne, England, and in 1878 took a two years’ hiatus at Hendon, England to study Qabalah and other metaphysical subjects. In 1881, he became deputy Coroner for Hoxton, and during the early 1890’s he was appointed Coroner for the North-East of London. Sometime between 1865 and 1878 he was admitted to Societas Rosicruciana in Anglia (S.R.I.A.) which was open only to high-grade Freemasons. Dr. Westcott became Magus of S.R.I.A. in 1890 and became Worshipful Master of the Research Lodge Quatuor Comati as well.
At least two of the Golden Dawn’s original founding members were members of Mme. Blavatsky’s Theosophical Society- Dr. Westcott and S. L. MacGregor Mathers. It is unclear if Dr. Woodman was a member. In the book, “The Magical Revival”, Mr. Kenneth Grant asserts that “…The Golden Dawn was the inner Mystery School of the Order that formulated itself in the outer world as the Theosophical Society.” The Theosophical Society antedated the Golden Dawn by six years. William Westcott was soon admitted to the nucleus of the Theosophical Society, the Esoteric Section, and became close friends with Anna Kingsford and Edward Maitland who were proponents of Christian Esotericism. When the members of the Esoteric Section broke away from the Theosophical Society, they formed the Hermetic Society in 1884, and Westcott was invited to join as an honorary member.

From about 1885 onwards, the publication “Transacdone,” which was issued annually by Metropolitan College of the S.R.I.A., indicated an expansion of interests of the S.R.I.A. from spirituality into regular lectures on the Qabalah and papers on Masonic symbolism. Dr. W.R.Woodman, who was Supreme Magus at the time, was a student of the Qabalah, as were Dr. William Westcott and Mathers. However, the S.R.I.A. could not and would not be re-organized as a school for Qabalistic and occult study. The need for an organization to teach and research these subjects lead to the birth of the Hermetic Order of the Golden Dawn.

The Rev. A.F.A. Woodford found the Golden Dawn Cipher Manuscripts in a cupboard where Kenneth Mackenzie (a leading Masonic figure of his time) had stored them. Rev. Woodford showed the manuscripts to Dr. William Westcott, due to Westcott’s reputation as a scholar of ancient lore. The cipher used in the Golden Dawn manuscripts was similar to the one used in the 15th century by Abbott Trithemius to encode some of his writings. This cipher was already known to Westcott when he received the documents from Woodford since he possessed a copy of Trithemius’ works on the cipher. Westcott was fully conversant with Masonic rituals and immediately realized that the Golden Dawn Cipher Manuscripts were a series of five summarized grade initiations. He commissioned S.L. MacGregor Mathers to re-write the rituals into a workable shape. He chose Mathers due to the latter’s reputation as a translator of occult texts and his particular experience and erudition with occult lore and the fact that Mathers was both a Masonic Brother and a co-leader of S.R.I.A. Westcott, Woodman, and Mathers were all IVth degree initiates of the S.R.I.A., and thus formed its governing triad. It is little wonder that the first governing triad of the Golden Dawn were these self-same individuals! Superficially the Golden Dawn represented a deepening extension of S.R.I.A.. with its emphasis on Ritual Magic, Alchemy, and the Qabalah.

Dr. William Westcott was very influential in the formation and working of the Golden Dawn. He was responsible for running the Golden Dawn in its early years. He was Praemonstrator of the Isis-Urania Temple in London and was the order’s organizing genius. His duties included being “recorder of minutes,” superintendent of the 5=6 admission, corresponding secretary, and treasurer, not to mention the order’s Chief Adept in Anglia from 1896 until the schism. Many manuscripts exist to this date written by his hand, which are principal instruction documents for the Golden Dawn and its Second Order. This multiplicity of functions and offices, in addition to his duties as Coroner, must have filled his every minute.

Both Dr. Westcott and Mathers (Dr. Woodman died very early on in the Golden Dawn’s history) were honest, hermetic scholars, and the teaching of their members fell on their shoulders. They taught Qabalah, Alchemy, Astrology, Geomantic and Tarot Divination, Tattwa Vision, and the Pentagram Ritual. Much of the background material for these teachings came from Dr. William Westcott; his occult and metaphysical library was unrivaled in his day and was the library of the S.R.I.A.. The grade structure of the Golden Dawn paralleled that of the S.R.I.A., with the exception of the highest degree of Ipsissimus, which was called Jesus in the S.R.I.A.

Another, seemingly unexplored affinity between Westcott and Mathers, is speculated as the anti-vivisection movement in England at the time they were together. There are brief glimpses of this through Westcott, who after all, was a medical doctor and a coroner and who must have participated in his own share of “animal studies’. However, when the esoteric or occult or magical were involved, Westcott seems to have sided directly with Mathers. For example, in William Westcott’s publication of the Eleusian Mysteries, he refers only the sacrifice of plants and Herb’s and perfumes, and omits any reference to the animal sacrifices known associated with the rites. A careful reading of many of Westcott’s papers conveys this tenor toward occult studies.

Dr. Westcott stressed the essential nature of having ten grades, for they represent the ten Sephiroth of the Qabalistic Tree of Life. In the Golden Dawn document entitled “Historical Lecture, by VH. Frater Sapere Aude, Praemonstrator of Isis-Urania Temple’, Westcott states: “The S.R.I.A. and its branches in the several countries, and the Golden Dawn Order both descended from the same parents and predecessors; the one developed into a masculine and Masonic system; the other remaining the ancient and more extended basis of the admission of all bona-fide students: rich or poor and without regard to sex, may alike go on and prosper without interfering with the tranquillity of the other and can lead true and patient students who can Will – Dare – Learn – and Be Silent to the Summon Bonum, True Wisdom and Perfect Happiness.”
By 1896 the Golden dawn was having many internal problems. And around this time Dr. Westcott was requested by political authorities to cease his occult activities with the Golden Dawn. The Order was achieving a notoriety with the press, and it was not seen fit for a Coroner of the Crown to be made shame of in such a way. Someone had sent a letter to Westcott’s superiors to engineer their discoveries. Although Dr. William Westcott ceased all outward activities with the Golden Dawn, he was still very much involved with its functioning, through either the Masonic or the S.R.I.A.. channels. Later in 1900 (once the furor has stopped) Dr. Westcott again joined the Golden Dawn in the rival Isis-Urania of the Stella Matutina and became its Praemonstrator. Dr. Westcott never at once sided against Mathers during this entire affair. Neither did he claim or disclaim the proof or lack of the same for the existence of the Secret Chiefs of the Third Order.

Dr. Westcott published an enormous number of works, besides his medical treatises. He wrote many subjects for the Societas Rosicruciana in Anglia; he translated “The Magical Ritual of the Sanctum Reg.” in 1896 from Levi’s work on the Tarot and edited the famous series of monographs entitled, the “Collectanea Hermetica.” Many of his writings were in the form of brief handbooks, dealing with such subjects as Alchemy, Astrology, Death, Divination, Numerology, Serpent Myths, Talismans, and Theosophy. He also translated the Sepher Yetzirah into English. William Westcott’s scholarship, knowledge, and erudition are impeccable. In the field of medicine he published materials on such subjects as alcoholism and suicide. He was accustomed to examining the evidence with the greatest possible degree and most probably conducted more than ten thousand inquests during his period as Coroner 1880 to 1910.

In 1918 Dr. William Westcott retired from professional life and emigrated to the Republic of South Africa to live with his daughter and son-in-law at Durban to begin work on behalf of the Theosophical Society (and perhaps Masonic work also). He continued his studies, his letters, and his writings. He died in Durban, Republic of South Africa, in July, 1925.