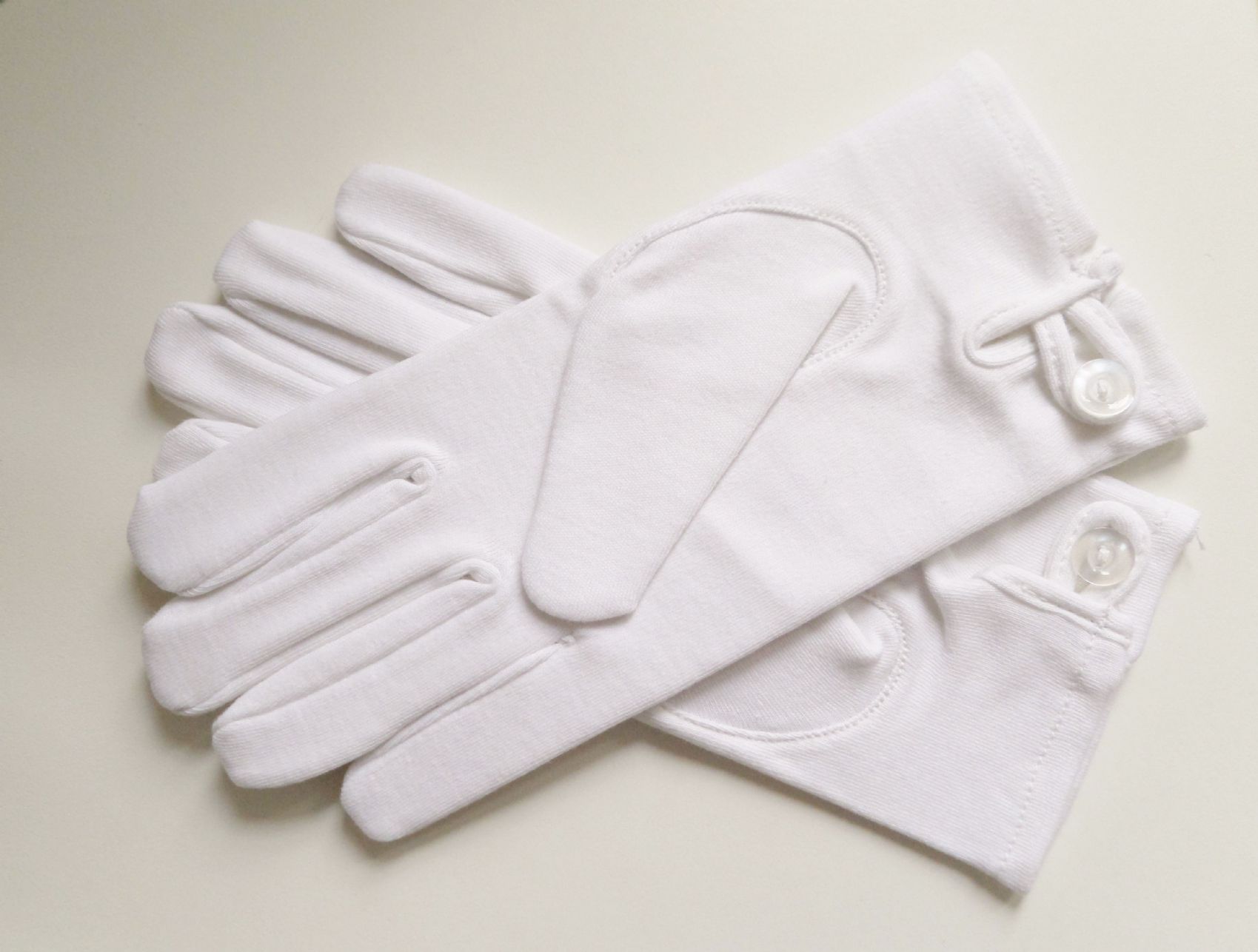 Apart from their practical uses to protect the hands from cold and injury, gloves have symbolic connotations. The old illustrations of operative masons at work do not show them wearing gloves. Their use, then, must have been mostly ceremonial, and their adoption in speculative Freemasonic ritual must be explained by their symbolism. The Italian writer Vanni considers that the origin of the symbolism lies not in their use by certain craftsmen or as protection against the cold, but rather in their military use. Carrying heavy weapons, such as the spear, large sword, axe or mace, involved wearing gloves for protection and to improve the grip. Gloves were at first made of leather, but eventually became protected with steel mail. To present a glove, then represented giving up the means of protection, and granting power to the receiver. [1]On the other hand, throwing the glove represented unfaithfulness and condemnation, as in the case of medieval judges who threw the glove to the convict.

Gloves do not appear to have been used in biblical times. In fact, the two names for glove in the Hebrew language (kfafah and ksaiah) are of modern coinage, the one derived from the word for hand and the other from the verb to cover. Probably the warm climate of the Holy Land made gloves superfluous.

In medieval times, the use of gloves by the aristocracy became more frequent, being worn in some sports (hunting with falcons, archery) and simply as ostentatious displays of luxury. In the courtly etiquette, if the knight offered perfumed white gloves to a lady and she accepted them, this established a relation of dependency between them.

The custom of presenting a pair of white gloves to the neophyte at the conclusion of an initiation ceremony has a long historical tradition, and it is recorded already in the 10th century. A chronicle relates that in the year 960, the monks of Saint Alban’s Monastery in Mainz (Germany), presented a pair of gloves to the bishop at his investiture. [2] The prayer pronounced during the investiture ceremony included a phrase beseeching God to cloth with purity the hands of His servant.

Similarly, the kings of France received a pair of gloves at their coronation. The consecrated hands of the king, like those of the bishop, should not be soiled by contact with impure things. After the ceremony, the Hospitaler burned the gloves, to prevent their later use for profane purposes. [3]

Durandus of Mende (1237-1206) interpreted gloves as symbols of modesty, since the good deeds performed with humility must be kept secret. [4]

The use of gloves by medieval masons is confirmed by documentary evidence. In the year 1322, at Ely (a cathedral city of England), the sacrist purchased gloves for the masons engaged in the “new work”, and in 1456, at Eton College, five pairs of gloves were presented to the “layers” of the walls, “as custom may have required”.
[5]

Another document indicates that in Canterbury College, at Oxford, the Head Steward noted in his accounts that “twenty pence were given as glove money to all the masons occupied in rebuilding the College”. [6]

In the year 1423 at York (England) ten pairs of gloves were supplied to the masons (“setters”) with a total cost of eighteen pence. [7]

In England, during the Elizabethan and Jacobean eras (1558-1625) gloves enjoyed a prestige that we can hardly appreciate today. They were articles of luxury, having great symbolism, and they constituted treasured gifts.

In 1571, Robert Higford sent a pair of gloves to the wife of Larence Banister. In 1609, J. Beaulieu communicated to William Trumbull that “My lord has given 50 shillings and a pair of gloves to Monsignor Marchant, as reward for having sent the design for the stairs”. In New Year day of 1606, each of the royal musicians presented a pair of perfumed gloves to king James I, and in 1563 the Earl of Herford, with whom the queen was displeased, wanting to regain her favor, wrote to Lord Robert Dudley, the queen’s lover, begging the Lord to present in his name a pair of gloves to the Queen as proof of his devotion. [9]

Gloves were a customary New Year gift, sometimes substituted by “glove money”.Also, gloves were a traditional present of lovers to their fiances.

Shakespeare, as we know, was the son of a glove-maker. In his play Much Ado about Nothing, the female character Hero declares “these gloves the count sent me; they are an excellent perfume” (Act III, Scene 4). In The Winter’s Tale, Autolycus sings of “Gloves as sweet as Damask roses”, and the clown proclaims:“If I were not in love with Mopsa, thou shouldst take no money of me; but being enthralled as I am, it will also be the bondage of certain ribbons and gloves” (Act IV, Scene 4), and in King Henry V, the king exchanges gloves with the soldier Williams, as pledge to meet again after the battle (Act IV, Scene 1).

The documents quoted at the beginning refer to operative masons. The tradition, however, was continued in Speculative Masonry. Since 1599 there is evidence that each mason, at his initiation, had to receive a pair of gloves (paid out of his own pocket!). The oldest document on this matter is known as the Shaw Statutes, addressed to Kilwinning Lodge and dated 28 December 1599, which prescribe that Fellows of the Craft, at their reception to that degree, were to pay a fee of 10 Scottish pounds and 10 shillings for the gloves.

Sometimes, the new Mason had to provide gloves for the entire company as part of his entrance fees. The practice was known as “clothing the lodge”. Anderson’s Constitutions of 1723, in article VII stipulates that “Every new Brother at his making is decently to cloath the Lodge, that is, all the Brethren present…”.

Documents of the Lodge of Melrose for the years 1674-1675 demonstrate that both apprentices and fellow-crafts had to pay entrance fees “with sufficient gloves to ye whole company”.[10]

An Aberdeen document of 1670 requires the Apprentice to pay four royal dollars as well as a linen apron and a pair of good gloves for each of the brethren. [11]The use of linen instead of leather is remarkable, but it is explained by the abundance of high-quality flax in the region. Leather was more expensive.

In 1724 a lodge at Dunblane is recorded as delivering gloves and aprons to the “intrants”,[12]and in 1754, in Haughfoot, England, the local lodge established that “no one can enter the lodge without a pair of gloves for each member of that lodge”. [13]

In The Natural History of Staffordshire (1688), Robert Plot, LLD,relates that it was a custom among Freemasons “that when any are admitted, they call a meeting (or Lodge, as they term it in some places), which must consist of at least of 5 or 6 of the Ancients of the Order, whom the candidates present with gloves, and so likewise to their wives…”. [14]This appears to be the first mention of the custom of presenting a second pair of gloves for the woman as part of the initiation ceremony.

An exposure called “A Mason’s Examination”, published in 1723 in a London newspaper, The Flying Post, begins thus: “When a Free-Mason is enter’d, after having given to all present of the Fraternity a Pair of Men and Women’s Gloves and Leathern
Apron…”. [15]

This became the tradition in all initiations, and it is specifically mentioned in the French initiation rituals of the 18th century, as described in the “exposures”.

Already the first know French “exposure”, dating from 1737, called Reception d’un Frey-Maחon (Reception of a Free-Mason), notes that in the initiation ceremony, the candidate “is given the apron of a Free-Mason, which is of white Skin, a pair of men’s Gloves for himself, and another [pair of] ladies’ Gloves, for her whom he esteems the most”. [16]

The custom, however, appears to have been abandoned in England and Scotland, because since the beginnings of the 19th century it is no longer mentioned in the regulations and minutes of the lodges. The Emulation Ritual (post 1813) ignores the practice. In Europe and other countries, particularly in lodges working the Ancient and Accepted Scottish Rite, the tradition remains in force until this very day. Usually, the presentation of the gloves comes at the end of the ceremony, and the Master of the Lodge then adds some words to the effect that the hands of the newly-made Mason, purified by the initiation, must never be sullied again, and as for the second pair, it is intended to stress the high respect in which Masons hold women in general, and the one closest to one’s heart in particular.

Albert Saban mentions a custom, according to which three pairs of white gloves were presented to the delegates of the Grand Orient when they came to install a lodge, before they entered the Masonic Temple. [17]

The glove’s protection is not only material but also spiritual. For this reason, when touching the Holy Book, (in the obligation, for example) the hand must not be covered. Likewise, when forming the “fraternal chain” customary in some rituals, the hands must not wear gloves. This, to allow the subtle energy of the magic circle to circulate freely.

In the higher degrees of the Scottish Rite, gloves of several colors: white, black or green, are prescribed for the regalia of various degrees, the symbolism of the color being related to that of the degree.