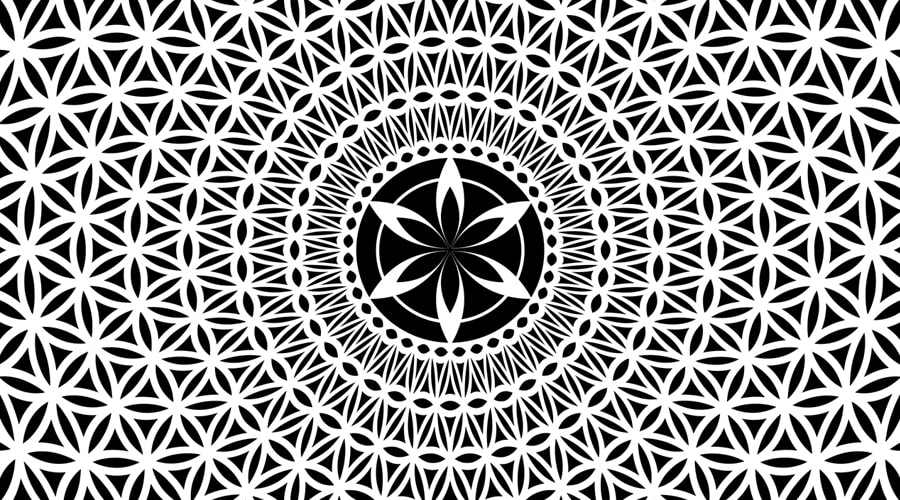 I have been asked to put a small paper together on a presentation I have been giving on the flower of life. I have to start by saying that I will be using the words Spirit, Consciousness, God, Creator, all interchangeably within this paper. Whichever entity resonates with the reader, go along with it!

So what is the Flower of Life?. Well, here it is….

It is more than just a picture. This is the pattern for creation in the universe. It is the basis of geometry, music, divine proportions, and every element known to man! No matter what place, planet or time you are in, if you study sacred geometry you will always come back to the flower of life. As it IS the container of all other sacred geometry.

It has been found in most civilizations and all over the world. Including Turkey, India, Japan,and Italian art including sketches from Leonardo da Vinci who studied the Flower of Life’s form and its mathematical properties.

It has also been found in China – The Forbidden City and various temples. The Chinese Dragon (Fu Dog). It looks strong and really menacing but have a look at what is under its paw. It Is the pattern of the flower of life.

Is he guarding some sacred knowledge perhaps?   It has been found in Israel – ancient synagogues in the Galilee and in Masada. The oldest reference to it is found in the 6,000 year old Osirian Temple in Abydos, Egypt.

Author Andrew Monkman writes, “I believe the complete ancient flower of life is an inter-dimensional tool, a portal, a stargate, a window into what some call the inter space plains. (Monkman, “Sacred Geometry – Flower of Life,” Accessed 9/26/2017 here: http://www.phoenixmasonry.org/sacred_geometry_the_flower_of_life.htm)

Let’s see how it is formed, more importantly what it forms…

How the Flower of Life is formed?

This is difficult to imagine but I would like you to turn off all the lights and be in a dark room all by your self. I want you to imagine there is complete nothingness in the universe.    Let’s just dwell on this for a moment….nothing exists, no stars, no planets, no atoms, no particles, no quantum mechanics, no God particle.  You are floating in nothingness (represented here by the Eye of Horus).

For us Masons it reminds us of the statement “In the beginning the earth was without form and void; and darkness was upon the face of the deep.”  Spirit gave rise to consciousness. Consciousness could not move up, down, left or right. It had no sense of anything other than itself.

So, consciousness expanded itself to a perfect sphere around its middle.

This is the first circle (actually a sphere) in the flower of life. You can do this yourself with a simple compass. You ever wonder where we get the term “Sphere of influence”? As Masons we are now reminded:  “And the spirit of God moved upon the face of the waters.” Essentially this is the first stage in creation, I have CREATED a space for to form Myself!

I now have the gnosis that it would be really cool to replicate myself, so keep my initial sphere intact then move my consciousness to the outer edge of the sphere. The birth of recreation happened at that moment.

Consciousness had created the heaven and earth.

This shape that has been formed in between is call the vesica piscis which translates from Latin as “Fish Bladder.” It resembles the conjoined dual air bladders found in most fish. The vesica piscis is used in lots of religious art.

In the same way, Humans begin as a single cell and replicate from there. It takes precisely 33 mitotic divisions to arrive at our total cell count. An interesting Masonic number!

You may all know this symbol.  Used almost exclusively today to denote membership in the Christian religion, the symbol once held a very different meaning. The custom of early Christians to communicate by drawing a portion in the dust was carried over from the practice of the ancient Pythagoreans, who discovered the shape’s unique properties and made it an important part of their teachings.

Spirit decides it is going to move again to exactly one radius away and we get the tripod of life which includes the holy trinity.

This movement and recreation of consciousness continues until eventually on day six is created the Seed of life.

According to some researchers, the Seed of Life is a symbol depicting the seven days of creation in which God created life.

Continue this process out to 13 spheres and you have, the “Flower of Life,” which can be better visualized in 3D called the “Egg of Life.” Join up their centres and you magically get a CUBE.

If we extend this out even further, we get an extended Flower of Life.

The ‘Fruit of Life’ symbol (at right) is composed of 13 circles taken from the design of the extended Flower of Life.

It is the blueprint of the universe, containing the basis for the design of every atom, molecular structure, life form, and everything in existence.

It also contains the geometric basis for the delineation of a special shape.

Now I know this seems to have got very complicated very quickly, but as brothers it is important to note the relevance of just who Metatron was and what he means to us.

Archangel Metatron is considered in esoteric literature to be the “Voice of God”. One of, or if not the highest Archangel. He is depicted in ancient texts with the image of the cube that bears his name emblazoned on his chest or floating around him. Why should Masons care about Metatron? In the bible, it identifies him as the angel that led the people of Israel through the wilderness after their exodus from Egypt. With reference to pillars of Light and Smoke. Metatron’s cube is also considered a holy glyph, used to ward off evil spirits.

The five platonic solids are geometrical forms which are said to act as a template from which all life springs. The Platonic solids are five structures that are crucial because they are the building blocks of organic life. These five structures are found in minerals, animated and organic life forms, sound, music, language, etc. The Greeks taught that these five solids were the core patterns of physical creation. Four of the solids were seen as the archetypal patterns behind the four elements fire, earth, air and water, while the fifth was held to be the pattern behind the life force itself, the Greeks’ aether.

According to ancient and medieval science (Plato), aether (Greek: αἰθήρ aithēr), also spelled æther or ether, also called quintessence, is the material that fills the region of the universe above the terrestrial sphere. Plato mentions that “there is the most translucent kind which is called by the name of aether but otherwise he adopted the classical system of four elements. It was thought to make up the heavenly bodies. It was noted that there was very little presence of quintessence within the terrestrial sphere.

1980’s Professor Robert moon at the University of Chicago demonstrated the entire periodical table of elements literally everything in the physical world is based on these 5 forms.

In fact throughout modern Physics Chemistry and Biology sacred geometrical patterns of creation are being rediscovered.

If we assume that the radius of each of these spheres has a dimension of unity…. Or One.

These are all irrational numbers, meaning that they go on forever and are never resolved.

Consider new the square root of 5.

If you apply a simple addition of 1 and divide by two you get an interesting equation. This is known as the Golden Ratio or PHI.

The golden ratio is found just everywhere in the world. It considers the Fibonacci sequence.

This sequence and its merits are justified for another paper. Suffice to say that the examples go from the very small to the huge. From DNA, to the nautilus shell, through body dimensions including human and non human faces all the way up to spiral galaxies. The DNA(B-DNA)  has two grooves called a major and minor groove which are in proportion of 13 to 21 Angstroms. The molecule measures 34 angstroms long by 21 angstroms wide for each full cycle of its double helix spiral. If you look hard enough you can find the Fibonacci series everywhere.

Other Shapes within the Flower of Life

Here we have the Cabbalistic Tree of life contained within the Flower of life.

The Chakras are also contained within the FOL

Musical notation is contained within the Flower of life.

There is one more shape that is contained within the Flower of Life. It is one that is pertinent to Masons. It is known by many names including a wheel within a wheel the Chariot of Fire or the true Chariot of the gods, as described in the Old Testament Book of Ezekiel. This is said to be a divine light vehicle used by ascended masters to connect with higher realms.

The symmetric form is called a stella octangula, or a Star Tetrahedron, or three dimensional Star of David.

It also has another name which is the Merkaba.

I had the personal experience of going on a Merkabah meditation weekend.

The Meditation is to enable you to connect your energies with higher energies and spiritual Beings in the higher dimensions.

The Merkabah becomes a spiritual vehicle that totally surrounds you.

It becomes part of your “LIGHT BODY”.

We are all “Sons of Light” are we not?

It is a 17 Breath Meditation

Next seven for proper Pranic flow.

Further breaths are used to shift the consciousness and “activate” the Merkabah.

Why should Masons care?

We need to look at the similarity of a spinning Merkabah and another favourite shape of our Craft. Consider the comparison of below.

What is more fascinating is if we add the sphere back in and put our light consciousness back into the sphere, it becomes even more compelling.

Have fun with a pair of compasses and see the magic unfold. We are all part of this mystic tie that can be unraveled by the simple Square and Compass.

Enjoy your path and “May your God be with you.”