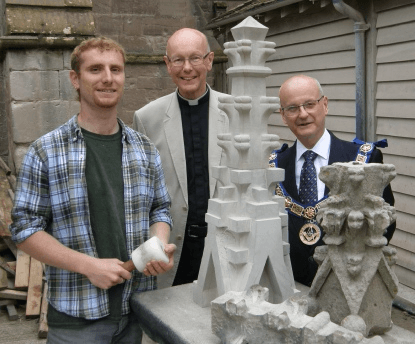 Earlier this year gales displaced one of the pinnacles high on the north west corner of Hereford Cathedral’s central tower causing fears that it would come crashing to the ground, severely damaging a number of roofs and potentially the ceiling of the nave in its fall.

Thankfully it did not happen and, through the generosity of the Hereford Masonic Charities and their Grand Charity, not only could ‘flying stonemasons’ retrieve the damaged pinnacle but a replacement has also been carved by Alec Curtis, an apprentice with Simon Hudson Stonemason, who is based in the working stonemasons’ yard in the Close.

‘Although it looked dramatic at the time,’ said the Dean, the Very Revd Michael Tavinor, ‘we were confident that we would be able to secure the old pinnacle as it had a metal pin running through it, but obviously such emergency repairs needed to be done quickly to prevent further damage to the building.’

‘We are extremely grateful to the Provincial Grand Master, the Revd David Bowen, who stepped forward straightaway to say that the Herefordshire Freemasons would support the work, which meant that we could remove the damaged pinnacle as soon as the weather had improved. Such emergency works are always tremendously costly and it is so difficult to budget for it.’

Under the watchful guidance of Cathedral Architect, Robert Kilgour Associates, a replacement pinnacle has been carved and will shortly be put back in place by Richard Martin of Heritage Stone Access Ltd, who combine the skills of rope access specialists with that of stonemasons.

‘We were delighted to be able to support the work,’ said the Revd David Bowen, ‘both as it was an emergency for the cathedral, which is always so welcoming to the Freemasons, but also as it gave an apprentice the opportunity to develop and showcase his skills. We have watched with fascination as Alec has worked on the new piece and it will be a great testament to his skill that he has been allowed to do this work.’

The pinnacle will be fitted back into place over the coming few weeks. Anyone willing to support emergency works to the cathedral and its ongoing repair programme should contact Hereford Cathedral Perpetual Trust, who will gladly advise on what is currently needing support.