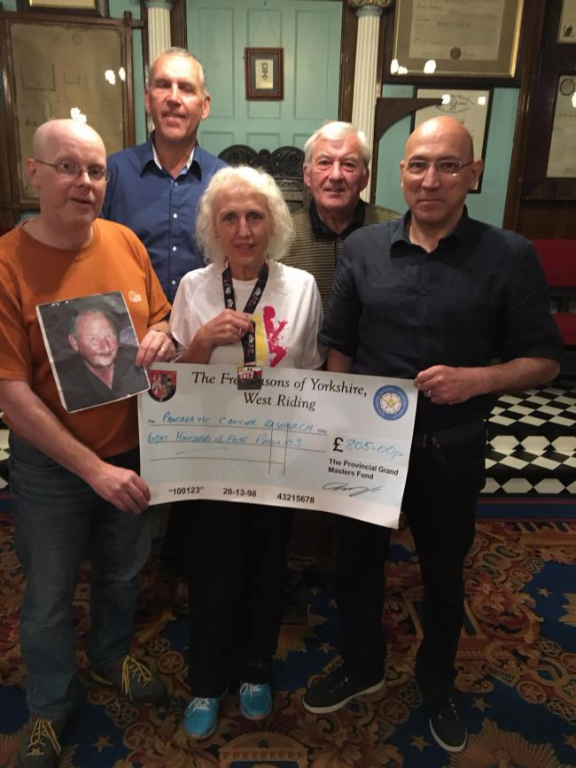 THE WIDOW of a former Keighley driving instructor has run a half-marathon in his memory.

Local masons joined in the fundraising drive after Jenny Carruthers decided to do the run in honour of her late husband Michael.

Michael, himself a mason, died of pancreatic cancer at his home in Spain in February 2015.

Jenny, who still lives in southern Spain, decided to run this year’s Leeds half-marathon to raise much needed funds for research into the disease.

She said: “I felt that I needed to do something to help with the research into pancreatic cancer so i decided to run in the half marathon.

“Besides gaining sponsorship for taking part in the event, I was so pleased to focus on training and running in the half-marathon because it helped me get through the grief of losing Michael.

“When the Freemasons at Haworth heard that I was undertaking the Leeds Half Marathon they staged a race night to raise money to sponsor me.”

For many years prior to his move out to his new home in Spain, Michael had been a much-loved and respected member and former Worshipful Master of both the Three Graces and Bronte Lodges.

Jenny added: “The masons had thought a great deal of Michael and they made me feel very special at the Race night.

“I was amazed when they raised £805 for my sponsorship and I cannot thank the members of both lodges enough for their support.”

A spokesman for the lodges said they decided to stage a ‘Pig Race’ to support Jenny when they heard of her efforts.

He said: “More than 60 members from both lodges together with their families and friends joined Jenny at the Pig Race night and had a wonderful evening.

“Both lodges were delighted to support Jenny and raise money for such a worthwhile cause that will help benefit those victims of the disease in the future.”

Freemasons in the Province of Yorkshire West Riding have been supporting charitable causes in the county for more than 150 years and the Provincial Grand Master’s Fund issues grants totalling more than £100,000 to West Yorkshire charities in support of community projects annually.

This year Freemasonry is celebrating 300 years since the formation of the United Grand Lodge of England.

Jenny completed the challenge by running the Leeds Half Marathon in an impressive three hours, ten minutes and the Lodge spokesman added: “We’re very proud of Jenny’s performance.”