The Freemasons of Essex and Hertfordshire have been long term supporters of Essex & Herts Air Ambulance Trust ever since the service began in 1998 and to date have raised an incredible £429,000 for the county’s life-saving Helicopter Emergency Medical Service.

In recognition of over 16 years’ support the Charity hosted a thank you evening for the Freemasons on Wednesday 9th July at Bury Lodge Banqueting, Stansted. The evening was an opportunity for the Charity to thank the Freemasons for their generosity and support over the years and to share with them the vision for the future. 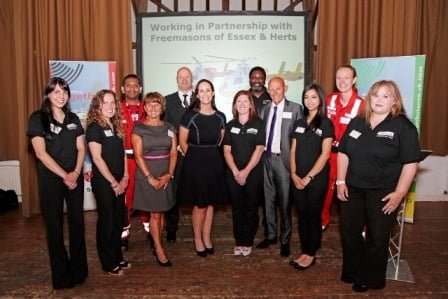 The Freemasons of Essex and Hertfordshire have been a consistent part of the Charity’s history sharing every key milestone along the way including; the 10th Anniversary of Essex Air Ambulance, the launch of the Herts Air Ambulance, introducing Doctors on board, the launch of a new MD902 Explorer helicopter, the opening of our Visitor Centre in Earls Colne, the opening of our Fundraising Office in Buntingford and the launch of our Extended Service on our new rapid response vehicle in March this year.

Jane Gurney, CEO of Essex & Herts Air Ambulance Trust, said: “We are extremely proud of the journey we have been on and it is a privilege to have shared that with the Freemasons of Essex and Hertfordshire. We work with many businesses and organisations across the county and it is an absolute pleasure to be working alongside the Freemasons. With ever increasing operational costs which amount to around £5.3 million a year this is a partnership we value considerably and wish to continue into the future.” 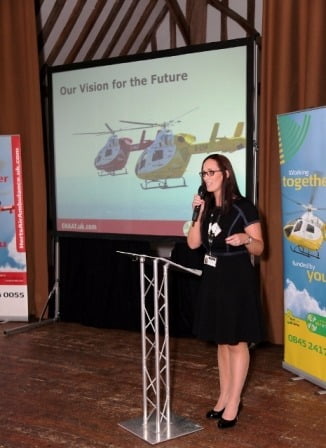 On the night of the Thank You event Jane Gurney gratefully received on behalf of the Trust five further donations from the Freemasons of Essex & Hertfordshire. Including two cheques for £4,000 from the Freemasons Grand Charity presented by John Webb, Provincial Grand Master from the Provincial Grand Lodge of Essex and Chris Noble, Provincial Grand Charity Steward from the Provincial Grand Lodge of Hertfordshire, another cheque for £1,000 from Arnold Lodge of Frinton-on-Sea presented by Robert Newman and Mike Allen, who has experienced firsthand the life-saving work of our dedicated Air Crew after suffering a fall, a cheque for £500 from the Aeronautical Lodge, plus two smaller donations of £100 each from Stansted Mountfitchet Chapter and Stansted Mountfitchet Lodge. This brings the amount raised so far to a grand total of £438,700.