Researchers may be one step closer to identifying the cause of type 1 diabetes thanks to a £50,000 grant from the Masonic Charitable Foundation to JDRF, a charity that focuses on curing, treating and preventing type 1 diabetes.

The Masonic Charitable Foundation, which is entirely funded by donations from Freemasons, awards millions of pounds each year to charities that support vulnerable people, including those affected by medical conditions and disabilities. The grant will part-fund research at the University of Exeter investigating whether enterovirus infections in the pancreas trigger an immune system response that causes type 1 diabetes.

Provincial Grand Master for Devonshire, Ian Kingsbury – the most senior Freemason in the county – visited the University of Exeter Medical School to present the grant and certificate for £50,000 to Dr Sarah Richardson the projects principal researcher. They were joined by Colin Rowland from Exmouth who has lived with type 1 diabetes for 50 years and is independently fundraising for the JDRF to support type 1 diabetic research.

Ian and Colin toured the lab with Dr Sarah Richardson, the project’s principal researcher where she explained that enteroviruses are small, very contagious viruses which typically occur in the gastrointestinal tract, sometimes spreading to the central nervous system or other parts of the body. They are currently associated with at least 26 different syndromes and diseases, including coronary heart disease and encephalitis, and central nervous system infections such as polio and meningitis.

There is evidence that infection with enteroviruses can encourage the immune system to attack the insulin-producing beta cells of the pancreas. Dr Richardson and her team are investigating whether enteroviruses also have a role in triggering type 1 diabetes.

Speaking of his visit, Ian said “I am so impressed with the very important and essential research work that is being undertaken at the RILD Centre especially with the eventual aim of being able to help children overcome diabetes. The equipment required to conduct the research work is very expensive and as Freemasons we are delighted to be able to contribute towards such important work”.

Type 1 diabetes is an autoimmune condition where the body’s immune system attacks and destroys insulin-producing cells in the pancreas. It is not linked to lifestyle or diet. The condition affects 400,000 people in the UK, 29,000 of whom are children. A child diagnosed with type 1 diabetes at the age of five faces up to 19,000 injections and 50,000 finger blood tests by the time they are 18. 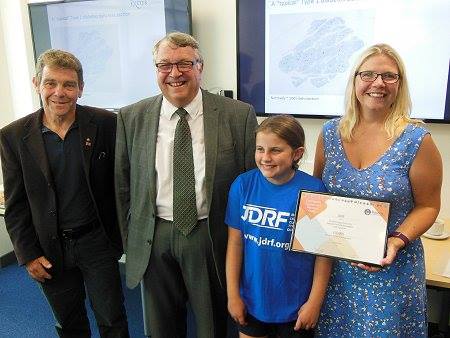 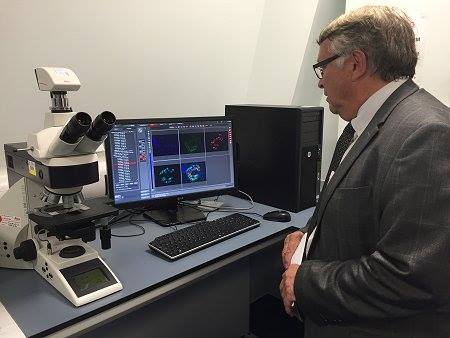