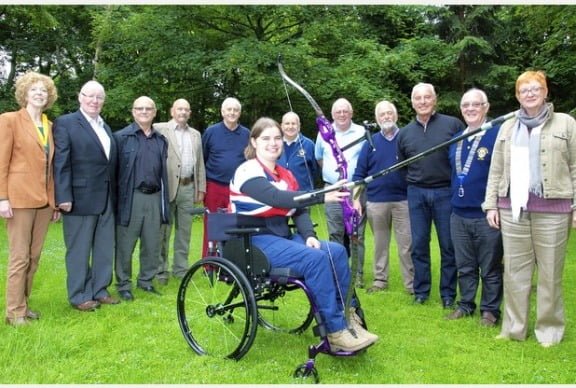 Aiming for Tokyo: Victoria Rumary tests out her new £2700 wheelchair and is watched by some of her benefactors from the Masonic Lodges, the Rotary Club and Lions. Chris and Terry Walton are seen far left.

A FRIENDSHIP between two dogs, called Mollie and Abi, has helped a Scunthorpe woman realise her dream of competing in the 2020 Tokyo Paralympics.

For last month Victoria Rumary, 27, was presented with a £2,700 specially-designed wheelchair to enable her to compete at international level in archery.

The fundraising was a joint operation between the four Masonic lodges in Scunthorpe and the town’s Lions and Rotary Clubs.

Abi became pals with Mollie, a Bedlington terrier belonging to ex-teacher Christine Walton, and the two women struck up a friendship, too.

More: New Scunthorpe attraction aiming to be king of the swingers – pictures

It was after Christine told husband Terry about Victoria’s story that the fundraising campaign started.

Terry, a retired steelworks mill manager, spread the word among his fellow Freemasons in the town’s St Lawrence Lodge and the money started to roll in.

After the job was done, Mr Walton said: “Victoria is a very brave and courageous young woman who deserves to succeed”.

He explained: “The new chair has been built to fit her.”

Victoria has for the past five months been training with Team GB in her own modified wheelchair for this year’s Paralympics in Brazil, but failed to make the number one selection.

She said: “My normal day chair was not ideal for archery. I had to sit on planks to lift me high enough so that the bow did not touch the chair which is not allowed.”

Until 2010 Victoria led a normal life.

After leaving school she became one of the top eight female archers in Britain, using a recurve bow, and also worked at the Riddings Pool in Scunthorpe as a swimming instructor.

Later she studied at universities in Lincoln and Sheffield and gained a degree in psychology and a masters in autism.

Six years ago she was confined to a wheelchair, after doctors diagnosed hemiplegia, a condition causing weakness down her left side and arthritis.

A series of operations were needed to remove part of her brain and skull to control epileptic seizures.

It was at this stage Victoria resumed her interest in archery. She recalled: “At first I did wheelchair basketball and during this time I realised I could do things.

wanted to shoot again but I had doubts. I love the pressure of the sport.

“Then my mum took me to see my old coach and it was amazing to see him. He asked me what part of the bow I pulled with my feet. His belief in me was still strong, and that I could still shoot.

“After less than one session with him I was so happy, and was shooting a training bow like I’d never left, except I was in a wheelchair – but he taught me that this was no hurdle to my archery.”

Now Victoria is hoping to find a corporate sponsor to help her train full-time at the national sports centre at Lilleshall, Telford, en route to Tokyo!