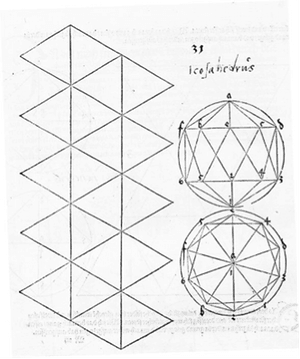 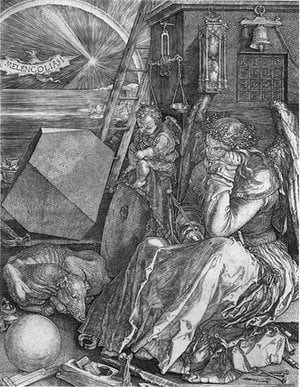 Cheesed off cherubs: Melencolia I is one of the best-known works of the Northern Renaissance. But what on Earth is that geometrical solid in the middle left of the picture?

In 1514 the German artist Albrecht Dürer (1471-1528) created the copper engraving Melencolia I. It was immediately recognised as a masterpiece, not only because of its remarkably fine and detailed execution and unsurpassed shadings, but also because of its unusual symbolism. Dürer was proud of his creation, carefully produced prints on the best paper he could get and gave them away as a proof for his artistry. But he was clever enough not to give any explanations. And thus even now, after 500 years of study (and certainly more than 500 interpretations, books, research papers, artistic essays and even blog entries about the piece), the mystery remains, and makes the piece as fascinating as ever.

The print shows a melancholic angel. Does it symbolize melancholia (as we know it today), or is it a representation of knowledge, of science, or of Mathematics? There are lots of tools for various crafts in the image, some of which point to masonry. There are round things and pointed things. There is a magic square, whose bottom row contains the entries 15 and 14, which together yield the year of creation. And then there is the polyhedron – which was mysterious then, and is mysterious now.

What is it? Here is a description: take a regular cube, balance it on one of its vertices, stretch it a bit vertically between the bottom vertex and the top vertex – and then cut these two vertices off by horizontal planes: voilà! 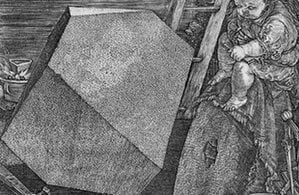 Edges of reason: a close up of Dürer’s polyhedron.

But why this polyhedron? And why this particular shape? Dürer doesn’t tell us, but he gives a few clues. And out of the hundreds of theories that have been brought up, here are five that are interesting and fun…

Is it a crystal? There certainly are crystals in such a form – I have learned this from Friedrich Hirzebruch, who referred me to this image “Calcite No. 17.” Indeed, there is a lively interplay between polyhedra and crystallography. But did Dürer study crystals? A systematic mathematical description of crystals begins only in the 17th century, so this theory comes at least 100 years too late. 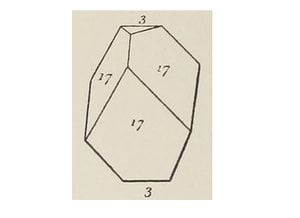 Is the polyhedron designed in such a way that its vertices lie on a sphere? In 2004 Hans Weitzel (Darmstadt) pointed to drawings in a Dürer sketchbook held in Nürnberg that suggest that. 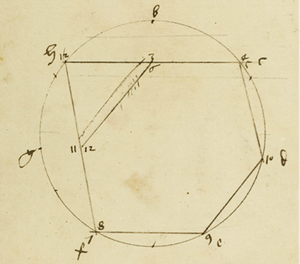 In what sense is this polyhedron “round”? In what sense can a polyhedron be “round”? This is not only a philosophical question, but it is also a current research topic – treated for example by the Discretization project A3 in Berlin.

Based on a drawing from 1514 that one finds in Dürer’s sketchbook, kept in the Dresden SLUB library and published in 1905. 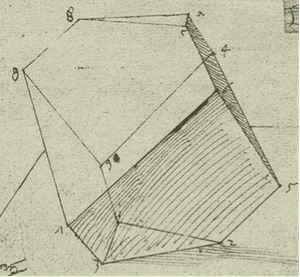 Ishizu Hideko (2009) has argued that Dürer has designed the proportion of his polyhedron to encode a solution to the classical Greek “Delian problem” to double the volume of a cube – for which one would need an expansion factor that is the cube root of 2. We now know (since the 19th century) that this problem cannot be solved exactly with compass and ruler alone – but there are very good approximate solutions, one of them due to Dürer in his Geometry book from 1525. But is this really encoded in the Melencolia polyhedron? It doesn’t convince me.

Dr Ernst Theodor Mayer, a retired psychiatrist from Munich, Germany, has noted that the vertices of the polyhedron projected vertically to the ground yield a star of David, but projected sideways they fit perfectly into the 4×4 grid of the magic square. Is this what Dürer wanted to show? Mayer’s findings are published on a Freemasonry website. It turns out that freemasons celebrate Dürer as one of their heroes, and the Melencolia is a centerpiece for this. (After all, there are masons’ tools for stonework in the image, aren’t there?) 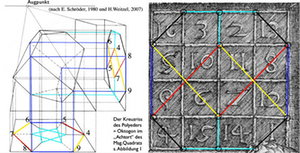 On the other hand, there is an extensive tradition of over-interpretation in this context. And indeed, you can easily find 500 interesting lines, circles, ellipses, intersections, patterns and structures in the little copper engraving … and then interpret! And Herr Mayer is very good at that.

My favourite theory is due to the US mathematician and artist George Hart, who runs a wonderful website on polyhedra. On Dürer’s polyhedron he notes: “One might speculate that the cube represents masculinity and truncating one in an upright position may have some Freudian symbolism.”

Whatever may be true: the Dürer polyhedron is a beautiful object. You can create your own using this foldout plan: 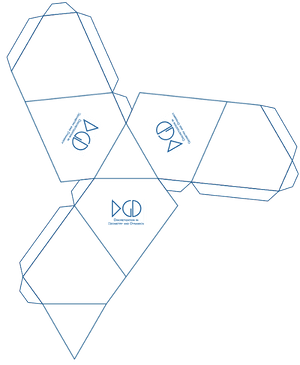 This is a very nice way to celebrate Dürer’s legacy since the great German was an early pioneer of foldout plans:

A modern take on Melencolia and Dürer’s polyhedron, by
Jan Schneider, of the Discretization project, Berlin.