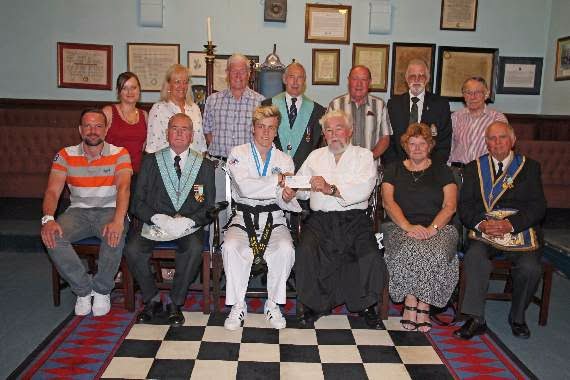 THE Bedford Masonic Lodge in Tavistock has presented a cheque of £1,200 to Olympic hopeful Tate Budge, who at 16 is the youngest third degree Taekwondo black belt in the UK.

The cheque was presented by Frank Handscombe, a black belt judo master himself, to help Tate with his considerable travel costs.

It is the tradition of the Masons to support education, sport and welfare.

Mr Handscombe is also a trustee of the Provincial Grand Lodge of Devonshire NEWT Fund which was set up to support young sportspeople such as Tate.

Also in attendance at the presentation were Brian Dalton, master of Bedford 282, and Chris Burcell, charity steward of the lodge, and other members. Tate’s mum and dad were also at the event.