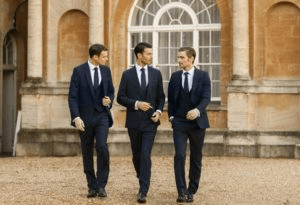 Contrary to popular opinion, a good suit can serve an infinite variety of roles and be adapted to almost any circumstance. Just as many women rely on an LBD (Little Black Dress) to see them through many different occasions, so a gentleman will find a Good Dark Suit—which should perhaps henceforth be known as the GDS—invaluable.

The Origins of the Suit

In the pages ahead, it will be stated more than once that men’s clothing as it exists today originated in England at the start of the 19th century and is particularly indebted to one man: George “Beau” Brummell. But the suit’s starting point goes back further, to the 17th century and the restoration of Charles II to the English throne. Prior to this period, the suit did not exist; while men may have worn short jackets; they were teamed with doublet and hose.

In February 1661 diarist Samuel Pepys noted that he had worn his “coate,” which was “the manner now among gentlemen.” The coate in question was of a length similar to the modern overcoat and was a somewhat fitted variation on a garment worn by men when riding. Five years later, in October 1666 Pepys recorded that the king “begins to put on his vest,” this being what the British call a waistcoat, but the Americans still know as a vest.

Thus the three-piece suit began to appear, especially when English countrymen who, unlike their French counterparts, did not care to attend court had such sets of clothing made in the same plain wool cloth to wear at home on their country estates. Anglomania in respect of clothing has a long history and one of its key dates is the publication in 1774 of the German writer Johann Wolfgang von Goethe’s The Sorrows of Young Wsrther. The hero of this proto-romantic novel dresses in the English style- -that is to say in a plain tailcoat, vest/waistcoat, trousers, and boots and Goethe’s book in.spired a mania among sensitive young men to dress likewise. One of the features of the French Revolution was the emergence of the Sans-culottes—-the men whose break with the Ancien Regime was symbolized by their abandonment of court knee breeches in preference for English-style suiting. 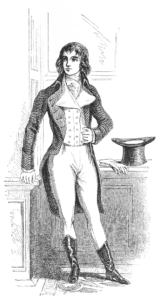 In the opening years of the 19th century, the most significant contribution made by Beau Brummell was to work with tailors in London. Together they focused on creating clothes that fitted the body and followed its line precisely; prior to Brummell’s appearance this had not been deemed a matter of importance. Brummell was a plain dresser, unconcerned with rich fabrics or elaborate finishes. Instead he concentrated on perfection of silhouette, achieved through careful cut of fabric and exact tailoring. His rise in influence coincided with an increasing sophistication among London’s tailors, many of whom, then as now, were based in Savile Row, Mayfair. The simple but supremely elegant style of dress advocated by both Brummell and his tailors was soon, universally adopted, hence the emergence of the Good Dark Suit that remains an indispensable feature of the male wardrobe. 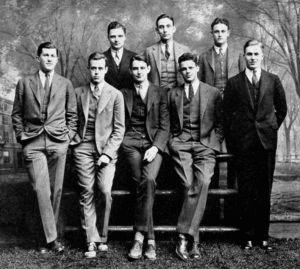 Although once almost revolutionary in its connotations, for the past half Century the suit has come to be associated with conservatism and is shunned by any aspiring radical. On the other hand, all men who wish to be considered respectable and conforming members of society will don a suit. For similar reasons, some men own what they designate their “interview suit,” a somber item worn whenever they wish to make a good impression. Suits are also associated with formal occasions, not just a job interview but also weddings, funerals, and so forth. They can be judged stuffy and uncomfortable, although anyone who finds them so is clearly not wearing a well-designed piece of clothing because a good suit should be as imperceptible to the wearer as a second skin. 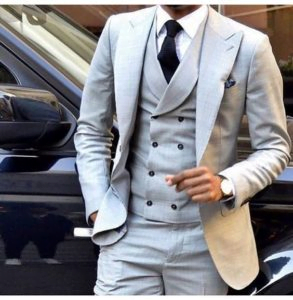 In the 1990s some businesses that had hitherto expected their employees to wear a suit abandoned this prerequisite, and many newer companies, especially those in the technology sector, began almost to frown on suits as somehow inhibiting creativity. Nevertheless, certain professions like banking and law, as well as senior management in most fields, still expect their practitioners to

wear a suit, as do large sections of the service industry.

Now, the derogatory term “suits” describes men who are believed to have sacrificed their individuality to corporate conventionality. This is a mistaken view; You will find the possession of a good suit enhances your wardrobe and its absence will leave you sartorially poorer than should be the case. No man who inspires to be well dressed can do without a suit.