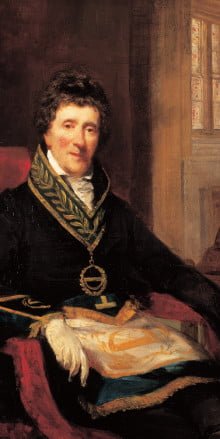 Sir John Soane (1753–1837) symbolises Britain’s architectural heritage of the late Georgian period at its best – the end of which coincided with his death in 1837. It is a period that gave England some of the nation’s most beautiful buildings and Soane’s unique style in some of them is still in evidence today.

John Soane, during his long and distinguished career, became involved with Freemasonry before his initiation. When invited to join, he was put through the three Degrees in one single afternoon and he remained dedicated to the Craft and enthusiastic for the remainder of his life.

He was born on 10 September 1753 near Reading in Berkshire and immediately after primary school his education was directed toward architecture. At 15 he joined George Dance the Younger (1741–1825), from the distinguished family of architects. Soane continued his training from 1772 under the equally celebrated architect Henry Holland (1745–1806), whose fame, among many other buidlings, rests with the Theatre Royal in Drury Lane and the Royal Opera House.

The young John Soane’s talents were soon to manifest themselves. In 1771 he was accepted into the Royal Academy of Art aged just 18 and within a year one of the drawings he submitted to the Academy’s competition won him the Silver Medal award. Four years later he received the prestigious Gold Medal, as a result of which he was introduced to George III by Sir William Chambers (1723–1796), the influential architect who was Soane’s patron.

There were several ramifications, some Masonic, following this encounter. Soane’s extraordinary achievements induced the King to sponsor and fund him, through the Academy, on a three-year travel scholarship to Italy, from which Soane profited to the fullest.

This was also the start to a Royal connection – later enhanced by Soane’s appointments as Clerk of the Works to St. James’s Palace and the Houses of Parliament (1791) and Deputy Surveyor to His Majesty’s Woods and Forests (1797) – which Prince Augustus Frederick, later the Duke of Sussex, the King’s penultimate surviving son and future Grand Master, would have noted.

Intellectualy armed with vast knowledge of fine ancient and renaissance buildings, in addition to well placed contacts in Europe, Soane returned to England in 1780 to set up his own business.

His career took on a most positive turn when he followed in the footsteps of Sir Robert Taylor (1714–1788) as the newly appointed Architect to the Bank of England, in which capacity he continued until 1833.

His vision and execution of the new greatly enlarged Bank of England building – of which today only the surrounding outer wall commonly referred to as ‘the curtain’ survives – is still considered a masterpiece of architecture.

Sir Herbert Baker’s Bank of England, completed in 1928, which demolished most of Sir John Soane’s earlier building, has been described as “the greatest architectural crime, in the City of London, of the twentieth century” (Pevsner). In 1802 he became a full Royal Academician and was made the third Professor of Architecture at the Royal Academy in 1806, a post that he held until his death.

In his long and illustrious career John Soane was responsible for many remarkable works. Among some of the notable ones are the dining rooms of both numbers 10 and 11 Downing Street, some buildings in Westminster and Whitehall, the Royal Hospital in Chelsea and Freemasons’ Hall in Great Queen Street, London, which had originally been built by Thomas Sandby (1721–1798), a Freemason and the first Professor of Architecture at the Academy, in 1775–76.

As the agreement for a Union of the two Grand Lodges (achieved on 27 December 1813) was reaching its final stages in October 1812, Grand Lodge, under the supervision of the Deputy Grand Master, the Duke of Sussex, decided on the acquisition of properties next to the existing Freemasons’ Hall.

The first step was for a survey and valuation of the property involved and the Grand Treasurer at the time, John Bayford, was instructed to approach John Soane for that purpose. Prior to March 1813, when Bayford finally made contact with Soane, there is no evidence at all to suggest that the architect had any interest in becoming a Freemason.

He would have certainly had a passing knowledge of some of his eminent colleagues and predecessors having been members of the Craft. However, considering this was a time when Soane was at the peak of his professional career, the chances of his finding time for Freemasonry were clearly very limited.

Nonetheless, on 19 November 1813, James Perry, Past Deputy Grand Master (1787–90) and a radical journalist and friend of Soane and Thomas Harper, Deputy Grand Master of the Antient, or Atholl Grand Lodge, proposed and seconded John Soane into Freemasonry in the Grand Master’s Lodge No. 1.

At an emergency meeting held on 25 November 1813 at Freemasons’ Hall, London, Soane was Initiated, Passed and Raised to the sublime degree of a Master Mason during the course of the same evening. Two other candidates, Jonathan Parker and Hymen Cohen Junior, were also bestowed the three Degrees at that meeting.

The first Masonic meeting that Soane attended as a new member, was a rather important one. On 1 December 1813, in anticipation of the election of the new Grand Master of the Antients Grand Lodge, the Duke of Sussex became an “Antient” Mason, thus allowing him to attend the installation of his brother, the Duke of Kent. The ceremony included several members of the Duke’s entourage of Grand Officers, which was later to facilitate the ceremony of the Union that took place later in the month.

His meteoric rise in the ranks of Freemasonry continued. It was undoubtedly induced by the Duke, who involved himself in all aspects of the running of Grand Lodge. The Grand Master-elect met Soane personally in August of the same year when the latter’s Initiation, Passing and Raising, as well as his Grand Rank may well have been discussed and agreed upon.

Having followed in the footsteps of his teacher and mentor, Thomas Sandby, as Professor of Architecture at the Royal Academy, Soane would have been attracted by the invitation to follow in Sandby’s footsteps as a highranking Freemason.

Some time in December, Soane was appointed Grand Superintendent of Works and declared as such by the Duke of Sussex, (1773–1843), the first Grand Master of the United Grand Lodge of England (UGLE), on 27 December.

He was reappointed in 1816 and held the same rank to his dying day. He was made President of the Board of Works in 1814, to enable him to supervise the building of the new Freemasons’ Hall.

On 4 June 1823 Soane was elected to the UGLE Board of Finance for a four-year period and exactly five years later, in 1828, he was nominated to the Board of General Purposes, where he served for the next seven years.

At the ceremony on 27 December an Ark of the Masonic Covenant was centrally placed in the temple and played a focal point in the proceedings when the two Grand Masters and their respective deputies advanced toward it to perform the symbolic act of Union of the two Grand Lodges. The Ark, an idea conceived by the Duke of Sussex, had been built by John Soane and presented to newly formed United Grand Lodge, at his own expense.

The first Minutes record: “…the ark of the Masonic Covenant, prepared, under the direction of W. Brother John Soane, Grand Superintendent of the Works, for the Edifice of the Union and in all time to come to be placed before the Throne.” Sadly, the Ark was burnt and destroyed in the disastrous fire of 5 May 1883.

His initial association with the Craft may have been on a purely business basis, which he had almost neglected. It took several letters from one of the joint Grand Secretaries, William Henry White, following on the Grand Treasurer’s initial approach, for Soane to submit finally his valuations, which were gratefully received and faithfully applied.

Existing correspondence shows that in all transactions with Grand Lodge, there were delays in execution of the contracts and the final payments to Soane were delayed because of a shortage of funds in Grand Lodge. This caused considerable embarrassment to Grand Lodge and some concern to Soane, as recorded in his diaries.

His involvement with the valuation and acquisition of the adjacent properties at 62 and 63 Great Queen Street extended to negotiations of price and counselling Grand Lodge on the excessive cost required by the vendors. On his advice alone, Grand Lodge refused to pay the price demanded.

The two properties were placed in auction on 23 June 1814 and bid for and purchased on behalf of Grand Lodge by Soane, for less than one-third of the original price.

Furthermore, the payment for the acquisition was made by Soane personally, who began to finance Grand Lodge.
At one stage Soane was convinced that he would not be paid at all for the work. These were no mean sums of money and it took until 1820 for Grand Lodge to disburse their debts to him in full – far longer than it should have done.

In 1833, John Soane bequeathed to the nation, by a private Act of Paliament, his house at 13 Lincoln’s Inn Fields in central London which contained his museum and library. He had made extensions to his home during a period of 30 years since 1794, having purchased the two adjoining properties.

This allowed him to fulfil, in practice, architectural concepts with which he wanted to experiment, whilst allowing for the housing of his vast and growing collection of classical antiquities and architectural paraphernalia salvaged from historical sites, all objects worthy of the British Museum.

They are on view today at his museum: a sarcophagus of Seti I, Pharaoh of Egypt of c.1294 BC, dramatically situated beneath the dome; Roman bronzes from Pompeii from 79 AD; several Canalettos and a collection of paintings by Hogarth, including An Election which came directly from Hogarth’s family through the estate of David Garrick, among many other fascinating objects and paintings.

The culmination of his achievements are reflected in the knighthood he received in 1831 and the special gold medal presentation made to him, three years after his retirement in 1835, by his colleagues in the newly founded Royal Institute of British Architects.

Grand Lodge presented him with a Certificate of Thanks in March 1832, signed by the two Grand Secretaries. In the same year, he commissioned John Jackson to paint a full length portrait of himself in full Masonic regalia as Grand Superintendent of Works. The painting hangs prominently today in the Picture Room of the John Soane Museum.

On 20 January 1837 Sir John Soane, now 84 years old, died, and was buried in the churchyard of St. Pancras Old Church in the vault which he himself had designed for his wife and himself in anticipation of their inevitable mortality.

The design of the vault was a direct influence on Giles Gilbert Scott’s (1880–1960) design for the red telephone box of 1926 – a permanent and visual tribute to a long and distinguished professional and Masonic career.