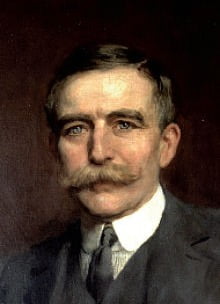 Henry Solomon Wellcome (1853–1936) was a remarkable man with many facets to his complex character: a scientist, businessman, philantropist, archaeologist, collector and Freemason. He left behind a legacy that has immortalised his name in each of the fields in which he excelled with equal success.

His philanthropy is manifest in The Wellcome Trust, established as an independent research-funding charity, as required in his will, on his death on 25 July 1936. Two years earlier he had witnessed the opening of the present Wellcome Building in Euston Road, London, much of it designed to his own specifications.

In business, as recently as March 1995, Glaxo took over Wellcome for the staggering sum of £9.4 billion, in what was then the biggest merger in UK corporate history. And in January 2000, Glaxo Wellcome announced its merger with SmithKline Beecham to form the world’s largest pharmaceutical company.

All this began in 1880 when Henry Wellcome, then just 27, left the United States to join his college friend Silas Burroughs in London and form the pharmaceutical company, Burroughs Wellcome. The firm flourished from the start, marketing and later manufacturing American compressed tablets.

Burroughs was a Freemason, initiated in Clapham Lodge No. 1818, but more importantly, he had employed as an accountant an English Freemason of standing and ability, Robert Clay Sadlow, whose subsequent life-long friendship with Henry Wellcome is the catalyst that brought Wellcome into Freemasonry.

They emigrated to New England in 1640, settling in Massachusetts. Solomon Wellcome, Henry’s father, married Mary Curtis in 1850 and Henry Solomon, their second son, was born in a Wisconsin log cabin on 21 August 1853.

It was almost natural for Henry to adopt England as his mother country. He was nationalised in 1910, received his Knighthood, following on many other honours, in 1934 and he died an octogenarian in London in 1936. His initial partnership with Burroughs unfortunately ran into difficulties within two years of its formation, and litigation ensued culminating in an 1889 court case, which found in favour of Henry Wellcome.

Notwithstanding the tensions between them, the company continued to prosper. When Burroughs died suddenly from pneumonia in 1895, Wellcome found himself in total control to implement his many whims – scientific and philanthropic – unhindered by financial or other restrictions.

It is a reflection of Wellcome’s enthusiasm for Freemasonry, that during this troublesome period in his life, he pursued his Masonic activity well beyond its basic needs and principles. He was initiated into Lodge of Fidelity No. 3 on 11 of February 1885, and his passing and raising ceremonies, which were carried out in the same year by Robert Sadlow, was reportedly at Eastes Lodge No. 1965.

On 19 March 1891, Henry Wellcome was the founding Senior Deacon of Columbia Lodge No. 2397 (he resigned in 1904) and a year later he was serving as Master of his mother Lodge. This is the year that he began his Masonic activities beyond the Craft.

On 4 April 1892, he was exalted into the Royal Arch at the Old King Arms Chapter No. 28 and advanced in the Mark a year later. He was elected Master of Hiram Lodge of Mark Master Masons No. 13 on 25 March 1896, exactly three years after his advancement. He resigned the Mark in 1904.

On 9 November 1894, he was perfected into Tuscan Chapter No. 129 of the Ancient and Accepted (Scottish) Rite (Rose Croix), reaching the 30th Degree in that Order in July 1898. Rather unusually, he only became Sovereign eight years later, in August 1906 and resigned from this Order, too, in 1920.

He was also installed a Knights Templar in 1893 and took the Malta Degree in May 1895. By now he had become Master of the Columbia Lodge, in a ceremony again conducted by his good friend Robert Sadlow. This followed on his duties as First Principal of the Old King Arms Chapter, in 1897, the year of the foundation of the Columbia Chapter in which he was Second Principal.

He was also, in 1890, an honorary member of Savage Club Lodge No. 2190. Notwithstanding all this intense Masonic activity, his enthusiasm and devotion to the Craft during these two decades is most manifest in the extra curricular activities associated with the unattached Clarence Lodge of Instruction in which he was elected Treasurer in 1893, a post that he actively filled until 1904. The Clarence Lodge of Instruction was founded by members of the Bank of England Lodge and was effectively a daughter Lodge to the well-known and long-standing Emulation Lodge of Improvement.

Toward the end of the 19th and beginning of the 20th centuries, the imagination of Victorian England was captivated by developments in Africa. Henry Wellcome had the flair and the money to do something practical about it. In 1884 he had met, and become close friends with Henry Stanley, the explorer, with whom he had a great deal in common.

It was his friendship with Stanley that was largely responsible for Wellcome’s great interest in Africa. He was among the first European civilians to visit the Sudan after the Battle of Omdurman in the winter of 1900. He later met Lord Kitchener, an equally enthusiastic and high-ranking Freemason. In November 1899, following the agreement reached between Britain and Egypt, restoring Egyptian rule in Sudan, Kitchener was simultaneously appointed Governor-General of the Sudan and the first District Grand Master of Egypt & the Sudan.

Sir Francis Reginald Wingate took over the Governorship from Kitchener, and much of Wellcome’s activities were coordinated through the auspices of Wingate. Henry’s first visit left such a strong impression on him that he spent a total of 14 active years in the area establishing the Gordon Memorial College and founding the Wellcome Tropical Research Laboratories in Khartoum, which placed Sudan in the forefront of tropical diseases research.

Wellcome was an enthusiastic collector and a keen archaeologist. His interests in the Sudan and Egypt extended to archaeological digs, most famously at Jebel Moya in the Sudan, where he hired over 4,000 people to excavate over a period of several years. Notwithstanding some controversy as to his treatment of the native workers, he was popularly known as Al Pasha by the local inhabitants.

His main collecting passion, however, was for medically related artefacts. He acquired a vast collection of scientific and other books and instruments – many of which are now on display in the Wellcome Gallery of London’s Science Museum or the Wellcome Institute Library. The Wellcome collection is vast, as Henry bought everything in sight that had anything whatsoever to do with medicine.

The collection includes, for instance, Napoleon Bonaparte’s toothbrush, Charles Darwin’s walking stick and Florence Nightingale’s slippers. In 1936, at the time of his death, the total Wellcome collection consisted of over one million objects of which some 125,000 items were medically related and formed part of the permanent collection.

The remainder of the items, including his Masonic possessions, were dispersed after his death by gift to other Museums and by auction. In one instance, on 21 March 1938, Harrods, Allsop & Co auctioned ‘by order of the trustees of the late Sir Henry Wellcome’ a total of nearly 200 books on Freemasonry in 11 lots (numbers 95 to 106).
These included a first edition of Anderson’s Constitutions of 1723, a 1745 edition of the French Exposure Ordre Des Franc-Maçon Trahi, a 1691 edition of a Knights Templar volume, among many other classical works. They were all purchased by a buyer identified only as Marks, for £4.10s.

It was in Khartoum in 1901 that Henry Wellcome met the beautiful, if somewhat impulsive, Gwendoline Maud Syrie and almost immediately fell in love with her. She was travelling with her father, Dr Thomas Barnardo , the famous founder of homes for orphan children and an old friend of Henry’s. Queenie, as she later became popularly known, was 21 and 27 years Henry’s junior. They married very soon thereafter and had one child, Henry Mounteney.

Initially all was well but their interests, emphasised by the difference in age, were at opposite ends of the social spectrum. Henry was energetic and enjoyed sport and travel, whilst Syrie preferred sedentary socialising in London’s sophisticated parlours and drawing-rooms. Their son, who lived into his eighties, was born with mild brain-damage and had a learning disability that kept him apart from his family from the age of three for most of his childhood.

Unable to identify with her husband’s work and activities and unhappy travelling with him, Syrie was soon having affairs, which included, though with scant evidence, the American-born magnate of the department store fame, Harry G Selfridge. In 1909, following a major quarrel, Henry and Syrie decided to separate. Syrie left for New York and they never saw each other again.

In an attempt to keep scandal out of the press, Henry agreed to a generous financial settlement. He was, however, outraged by Syrie’s relationship with the homosexual writer William Somerset Maugham. Syrie bore Maugham’s child in Rome, named Mary Elizabeth and nicknamed Liza, after Liza of Lambeth, the heroine of Maugham’s first book, written before she was born, giving her Wellcome’s surname.

Henry commenced proceedings, culminating in a divorce in February 1916, citing Maugham as co-respondent. The case was uncontested and Syrie gained custody of the child. Within three months she was secretly married to Somerset Maugham in New Jersey on 16 May 1916. They divorced in 1928.

A great deal of publicity brought intimate details into public attention. Syrie had claimed that Henry treated her with brutality, neglecting her with his endless travelling and his excessive Masonic activities. It was not surprisng that he left her nothing in his estate, although he gave £500 to Dr. Barnardo’s homes for children.

In line with his impulsive, even if resolute nature, Wellcome’s Masonic interests waned after the highly concentrated period in which he had been so intensely active.

It is thought that a specific incident may have triggered something in his sensitive nature to cause his gradual resignation from specific Lodges and general withdrawal from the Craft. There is, however, one last gesture on his part, of lasting Masonic consequence. It is his gift of the impressive life-size painting of George Washington to the United Grand Lodge of England. It hangs in the first floor Lounge at Freemasons’ Hall in London.

As the centenary of the death of Washington in 1799 was approaching, Henry Wellcome offered Grand Lodge the portrait, which was gladly accepted. There was a delay due to the low quality of the first painting, and Wellcome commissioned the well-known American portrait artist Robert Gordon Hardie (1854-1904), writing to him on December 2nd 1901, as follows:

I feel that by changing my original plan you will have much greater scope in painting a really masterful picture, which I am sure you will take great pride in doing. If you think it desirable to introduce Washington’s coat of arms (which contain the stars and stripes) you might do so.

There are a great many portraits of Washington, which are excessively bad, and make him look more like George III than the true Washington. What is wanted in this picture is the type of Washington which you and I have known all our lives – our ideal! The great, wise and highly spiritual Washington – the true father of our country.

The painting was formally unveiled on 8 August 1902 by the American Ambassador, Joseph H Choate, in the presence of the Earl of Warwick, Deputy Grand Master of the United Grand Lodge of England and a small gathering of Brethren in the library of Freemasons’ Hall. Among others present were J R Robertson, Past Grand Master of Canada, Sir J Puleston, Alderman F Trehawke, Col Daly, District Grand Master of British Guiana as well as Henry Sadler, the Grand Tyler and Clay Sadlow and Henry Wellcome himself.

The portrait of George Washington is in the dress of the period with full Masonic regalia and, as requested, in the corner are the arms of the Washington family, which are the origin of the American stars and stripes. It is a permanent reminder and memorial to Wellcome’s remarkable life, his generosity and close involvement with the Craft.