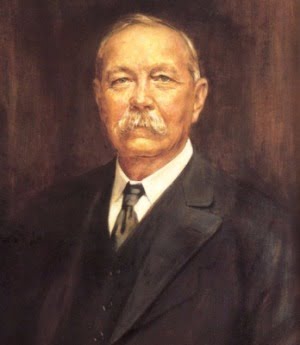 Sir Arthur Conan Doyle was a Scottish doctor, author and poet, and is most notably remembered for his stories about the detective Sherlock Holmes. Regarded as the leading light of crime and science fictions, the author is best known for the world popular character Sherlock Holmes and the adventures of Professor Challenger. Sir Arthur Doyle was a prolific writer and produced a prodigious output in a variety of genres ranging from science fictions to historical novels to plays and romances and non-fiction stories. The world famous character of detective Sherlock Holmes first appeared in his novel A Study in Scarlet in 1887, and from then on Sir Arthur began writing stories starring the character which resulted in about fifty five more Sherlock Holmes stories and four novels starring him. He wrote many fiction and non fiction works including The Stark Munro Letters, The Exploits of Brigadier Gerad, The Hound of the Baskervilles and his masterpiece The Lost World. Many of his works are still in print and have been published in a number of foreign languages.

In 1882, Arthur Doyle ventured in to medical practice with a friend, but soon regretted his decision and parted away to set up his own practice. He managed to set up a medical practice in Elm Grove, Southsea. The practice initially did not earn him much and he found plenty of time to write in his free time. A Study in Scarlet, his first important work featuring Sherlock Holmes appeared in 1887. From then on, Sherlock Holmes became an indispensable part of his short stories and most of them were published in the English Strand Magazine. While living in Southsea, Arthur Doyle developed a passion for football and devoted a considerable time to the Portsmouth Association Football Club, playing as a goalkeeper. He also performed well in cricket for an amateur and was once elected captain of Crowborough Beacon Golf Club, East Sussex.

In 1887 at the age of 27, Doyle was initiated to the fraternity of Freemasons at the Phoenix Lodge No. 257 in Southsea, Hampshire. Present at his initiation was Dr. James Watson who became fast friends with Doyle, and whom became the inspiration of Sherlock Holmes’ famous sidekick. Brother Arthur Conan Doyle was called from labor on July 7, 1930 at the age of 71 and is laid to rest at the Minstead Churchyard in New Forrest, Hampsire.